In our last review of the an ASRock motherboard, the Z390 Phantom Gaming-ITX/ac, we highlighted the consistency in its UEFI firmware. The HEDT X399 Phantom Gaming 6 swerves slightly away from this with a simpler set of overclocking related settings. The design of the firmware consists of a simple red and black Phantom Gaming themed GUI, with white text for added pop. It is presented in a well-organized manner and resembles the simplicity with ASRock models over the last couple of generations - no EZ or advanced modes on the X399 Phantom Gaming 6, just one overall and amalgamated UEFI BIOS. 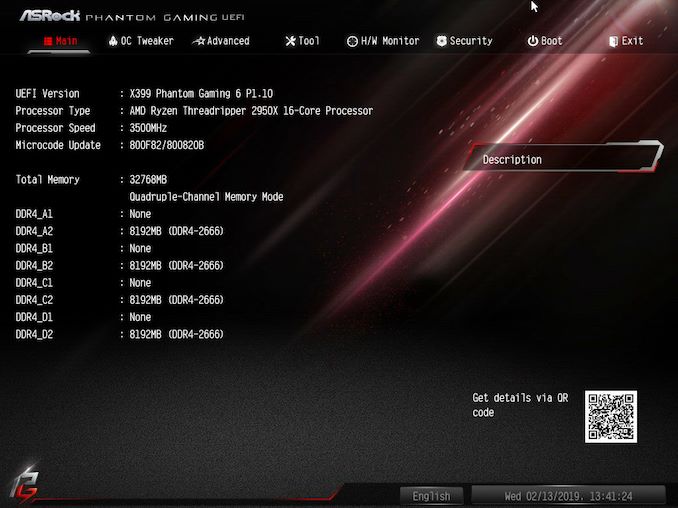 Pressing either the F2 or Del key during POST will automatically land users onto the main section of the BIOS. The initial splash screen highlights a very basic overview of the installed processor, the processor speed and firmware version. Located below this is a basic list of the RAM installed into which slot; nothing on the type, but more so the capacity and speed. A capacity total is present which in this case is 32 GB and that it's running in quad channel memory mode. 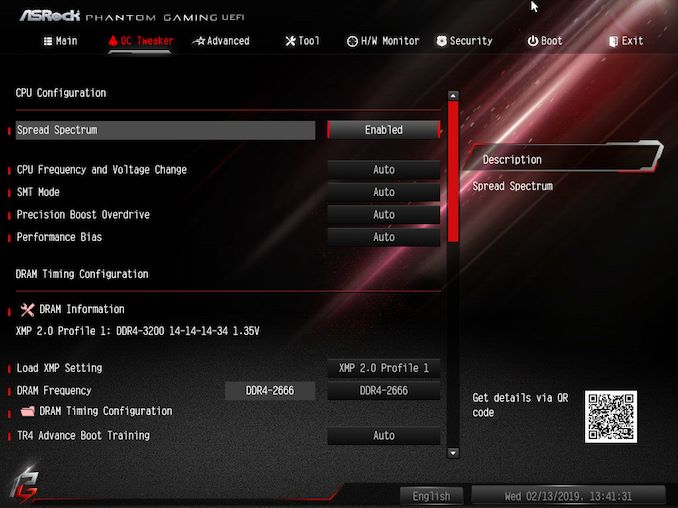 Moving onto the next section is the OC Tweaker; the place to overclock the CPU and memory. Featured is a basic set of overclocking options expected from a platform that does support overclocking, but with little overhead due to temperature issues associated with high core counts. Users can change CPU frequency and set voltages manually, or leave them on automatic, as well as enable XMP 2.0 memory profiles on compatible DRAM. Selectable is the Precision Boost Overdrive setting which can be left on auto, enabled or disabled. By default, and from our testing, auto doesn’t mean enabled and users looking to make use of it should enable it. This setting will draw more power and create more heat. The ASRock X399 Phantom Gaming 6 by default uses a load-line calibration setting of Level 3. 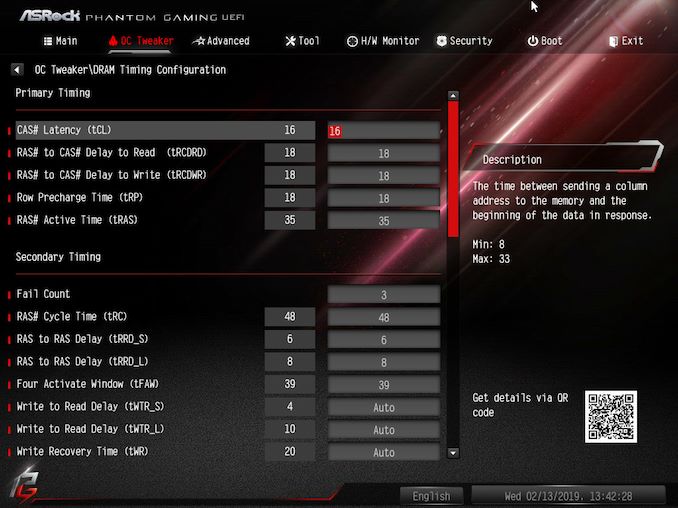 Due to memory frequency limitations on AMD platforms when compared directly against Intel, the ASRock X399 Phantom Gaming 6 officially supports up to DDR4-3400. ASRock has capped the memory frequency at DDR4-4000 in the BIOS which is more than acceptable. Within the memory settings is a list of tweakable latency timings which is very basic when compared with ASRock boards previously reviewed such as the ASRock Z390 Phantom Gaming-ITX/ac, but still offers more than users will need when tuning RAM on a Threadipper based system. 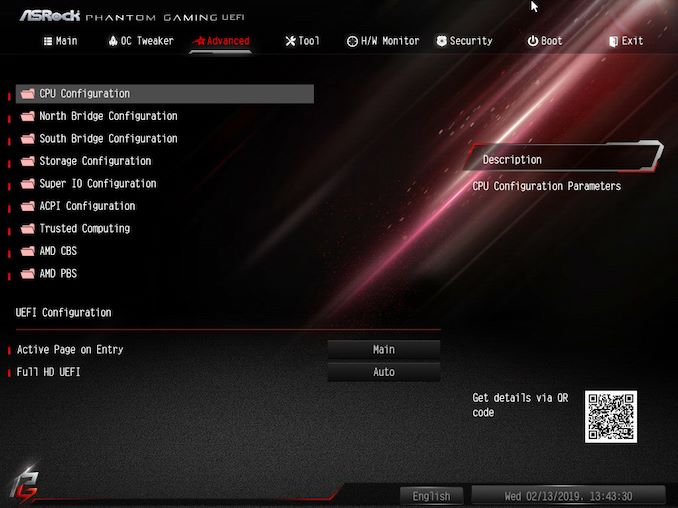 The advanced section allows users access to the board’s controller set including the enabling and disabling of network ports and the onboard audio. Users can enable IOMMU for virtual machines, or view and customize storage-related devices such as SATA hot plug settings. All the AMD CBS related options are located here and include CPU power state settings, advanced memory options and even allows users to change throttling settings. 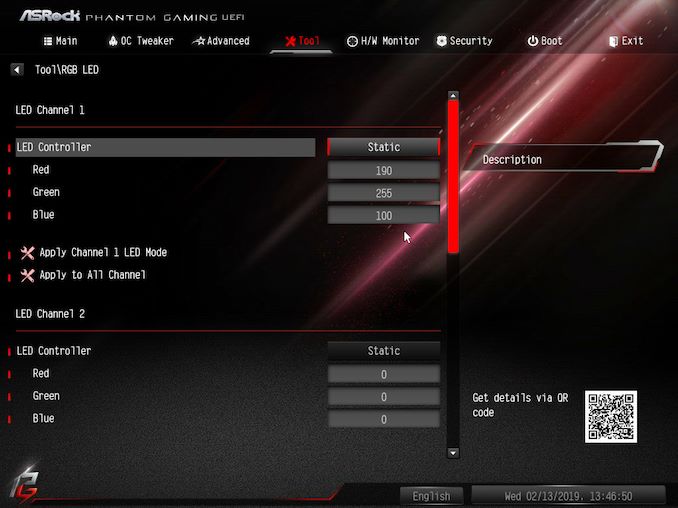 Within the firmware is a basic tool for customizing the effects and the color of integrated and extended RGB LEDs. There is no color wheel present so users looking to set colors to match their specifications will need the RGB color code. Users can apply the settings to single channels or to all at once. It’s very basic and users looking for more extensive options can use the ASRock Polychrome RGB software. 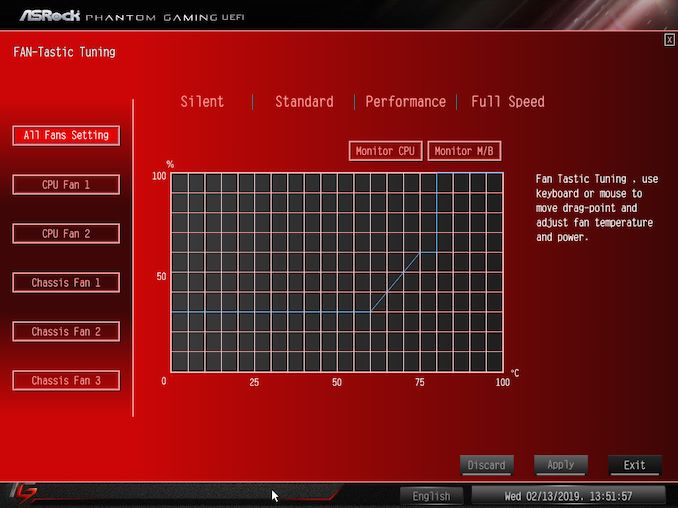 ASRock includes its Fan-Tastic Tuning utility within the firmware and gives users control of the cooling performance of fans and pumps installed into the 4-pin headers. Users can allow the firmware to perform the tuning automatically or set their own profiles. The settings can either be synced across all the available headers or set individually, both through a set profile or a custom fan curve profile.

For a platform such as Threadripper, the ASRock X399 Phantom Gaming 6 firmware is more than enough to get things operation and even do some overclocking. The settings aren’t as extensive as the more premium ASRock X399 Taichi model, and the EZ mode is dropped in favor of a simpler all-round UEFI BIOS. Even though the firmware generally flows well, I did experience some input lag from the mouse which could be a little frustrating, but the keyboard input was sharp as expected.

ASRock’s X399 software bundle with the Phantom Gaming 6 isn’t too dissimilar from the mainstream software. The core of the software is reliant on the ASRock Phantom Gaming Tuning utility which is a rebadged and rebranded version of the A-Tuning software. For traffic shaping and management, ASRock has included the Phantom Gaming 2.5 GbE LAN software which complements the 2.5 GbE Realtek networking, and its Polychrome Sync RGB software to customize the built-in RGB LEDs. Other notable software includes the ASRock Live Update and App Shop and the Restart to UEFI software. 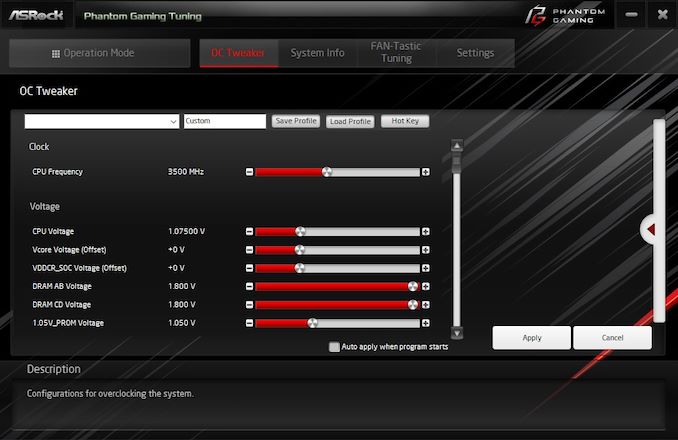 With the ASRock Phantom Gaming Tuning software, it’s essentially a remade version of the A-Tuning software, which is a remake of the F-Stream utility. The only differences come in the theme and with young Phantom Gaming brand, the software is consistent with an associated red and black theme. The Phantom Gaming Tuning software allows users to do CPU overclocking within Windows and offers customization on settings such as CPU frequency, CPU voltage and even DRAM voltage on both channels. There aren’t any memory frequency or latency timing settings and EZ OC has been disabled within the software as it’s not supported on the X399 chipset. 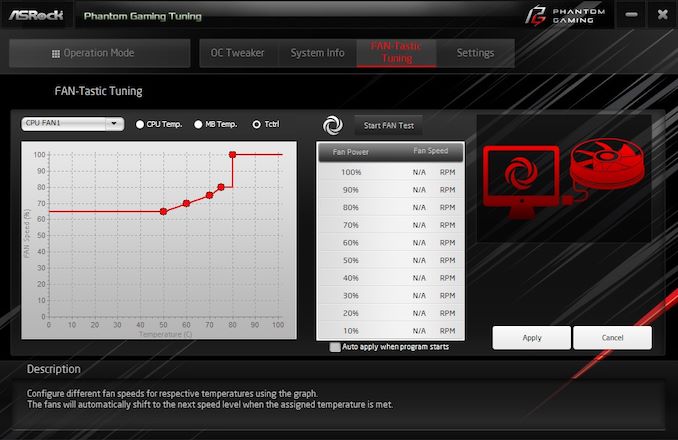 Built-in to the Phantom Gaming Tuning software is the FAN-Tastic Tuning utility. Very similar to what’s in the firmware, the software allows users to customize fan profiles on the fly and what’s more, it looks much more modern and stylistic. Users can set custom profiles based five-point curve with CPU temperature, motherboard temperature and TCTRL all featured. 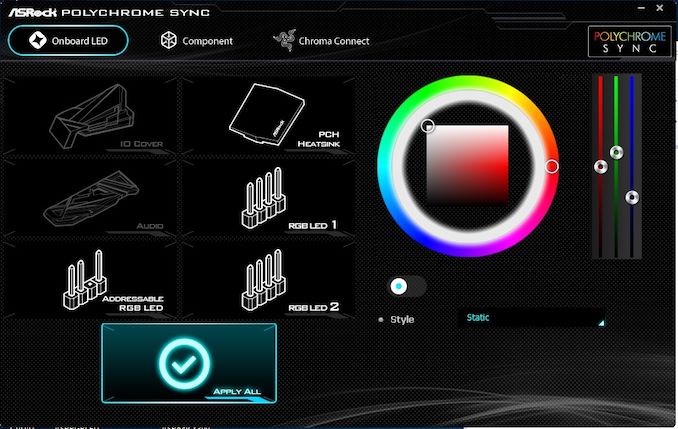 All the boards RGB LED capabilities can be accessed and customized via the Polychrome Sync RGB software. The ASRock X399 Phantom Gaming 6 has two standard RGB headers and a single addressable RGB header which can be individually set or can be synced together for uniformity. ASRock’s Polychrome Sync is one of the better RGB utilities and lets users customize RGB memory, as well letting users sync up Razer Chroma compatible devices; this requires users to have Razer Synapse enabled. Various settings including static, rainbow, wave is selectable, and users can select their desired color either with a color wheel, or a set of red, blue and green sliders. 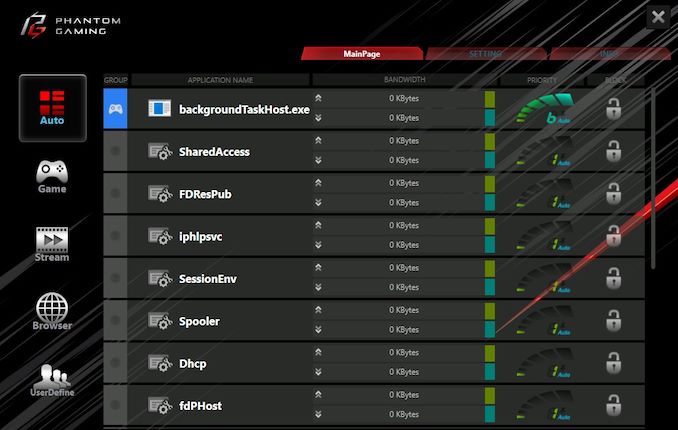 Accompanying the new Realtek 2.5 GbE NIC is the ASRock Phantom Gaming LAN software. It’s basically a traffic monitoring and shaping utility. On the design, it matches up with the Phantom Gaming theme and has three main screens; main page, setting and info. Users can view a basic overview of the connection including the IP address, MAC address and speed of the network. For users on a metered connection, the software has a nifty alarm feature which can notify users based on network use. 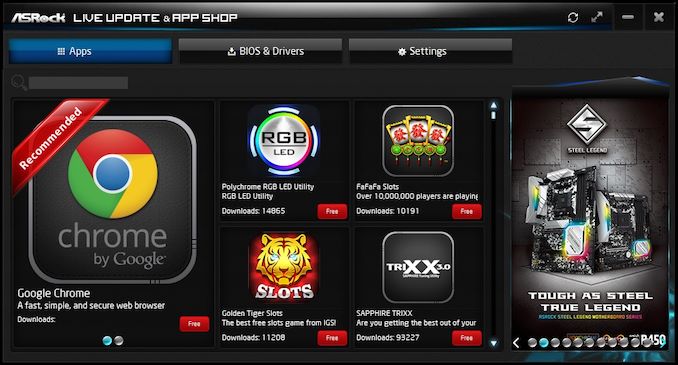 One thing I like about the ASRock Live Update and App Shop is users can update the relative firmware and drivers on the current model installed with a couple of mouse clicks. The app store has lots for users to choose from including Google Chrome, ASRock utilities including the Polychrome RGB software, and even the Sapphire Trixx graphics card overclocking tool. It also has a lot of junky gambling related games such as slots filling out the store.

Onboard audio is an important aspect that manufacturers focus on; a good audio codec and software suite can make a user’s experience something to remember. This is the second ASRock board in recent times that has had issues when installing third-party audio software; the other being the ASRock Z390 Phantom Gaming-ITX/ac. On the ASRock X399 Phantom Gaming 6’s official product page, there’s a download link for the Sound Blaster Cinema 3, but it needs to be noted that the marketing materials in the overview advertise Sound Blaster Cinema 5 support; I couldn’t find a download link anywhere. When we installed the software supplied from the product page, we couldn’t get it to work with the Realtek ALC1220 codec no matter what we did. Even with two different Windows 10 installs, one fully updated above and beyond our test suite with everything at their latest versions, it was fruitless. The issue seems to be commonplace on various forums and it could be firmware related. 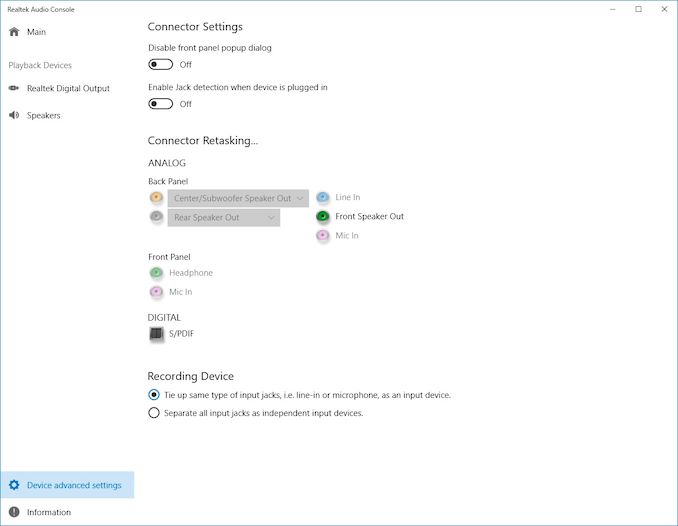 For users that cannot install the Sound Blaster Cinema 3 software, the Realtek Audio Console is ever reliable and allows users to make basic tweaks to their auditory experience. Each of the different connections get their own screen, the five 3.5 mm audio jacks and the digital S/PDIF optical output, and users can change the audio bitrate. Unfortunately, the Realtek Audio Console is very basic and doesn’t allow users to customize their own EQ profiles or select from any EQ presets.