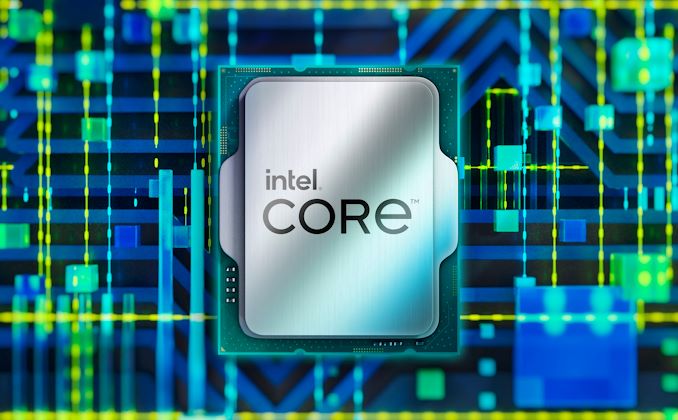 Today marks the official retail availability of Intel’s 12th Generation Core processors, starting with the overclockable versions this side of the New Year, and the rest in 2022. These new processors are the first widescale launch of a hybrid processor design for mainstream Windows-based desktops using the underlying x86 architecture: Intel has created two types of core, a performance core and an efficiency core, to work together and provide the best of performance and low power in a singular package. This hybrid design and new platform however has a number of rocks in the river to navigate: adapting Windows 10, Windows 11, and all sorts of software to work properly, but also introduction of DDR5 at a time when DDR5 is still not widely available. There are so many potential pitfalls for this product, and we’re testing the flagship Core i9-12900K in a few key areas to see how it tackles them.

Since August, Intel has been talking about the design of its 12th Generation Core processor family, also known as Alder Lake. We’ve already detailed over 16000 words on the topic, covering the fundamentals of each new core, how Intel has worked with Microsoft to improve Windows performance with the new design, as features like DDR5, chipsets, and overclocking. We’ll briefly cover the highlights here, but these two articles are worth the read for those that want to know.

At the heart of Intel’s processors is a hybrid, or heterogeneous, core design. The desktop processor silicon will have eight performance cores (P-cores) and eight efficiency cores (E-cores), the latter in two groups of four. Each of the cores is designed differently to optimize for their targets, but supports the same software. The goal is that software that is not urgent runs on efficiency cores, but time-sensitive software runs on performance cores, and that has required a new management control between the processor and Windows has been developed to enable Alder Lake to work at its best. That control is fully enabled in Windows 11, and Windows 10 can get most of the way there but doesn’t have all the bells and whistles for finer details – Linux support is in development. 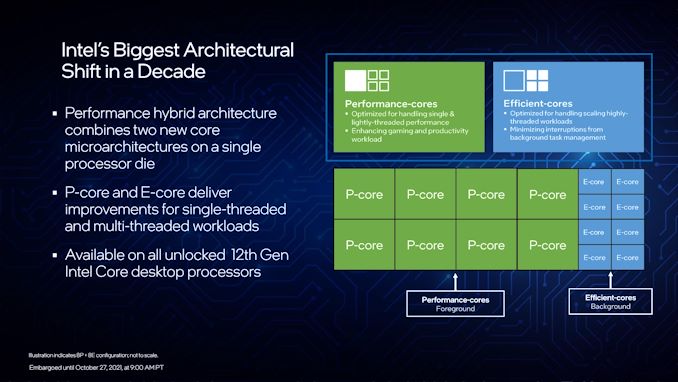 The use of this hybrid design makes some traditional performance measurements difficult to compare. Intel states that individually the performance cores are +19% over 11th Generation, and the efficiency cores are around 10th Generation performance levels at much lower power. At peak performance Intel has showcased in slides that four E-cores will outperform two 6th Generation cores in both performance and power, with the E-core being optimized also for performance per physical unit of silicon. Alternatively, Intel can use all P-cores and all E-cores on a singular task, up to 241W for the Core i9 processor.

On top of all this, Intel is bringing new technology into the mix with 12th Gen Core. These processors will have PCIe 5.0 support, but also DDR5-4800 and DDR4-3200 support on the memory. This means that Alder Lake motherboards, using the new LGA1700 socket and Z690 chipsets, will be either DDR4 or DDR5 compatible. No motherboard will have slots for both (they’re not interchangeable), but as we are quite early in the DDR5 lifecycle, getting a DDR4 motherboard might be the only way for users to get hold of an Alder Lake system using their current memory. We test both DDR4 and DDR5 later on in the review to see if there is a performance difference. 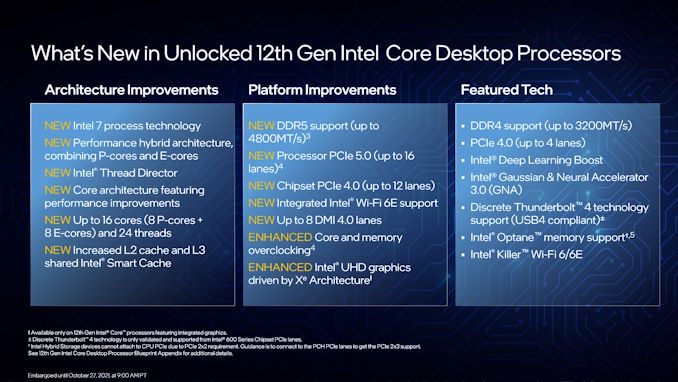 A small word on power (see this article for more info) – rather than giving a simple ‘TDP’ value as in previous generations, which only specified the power at a base frequency, Intel is expanding to providing both a Base power and a Turbo power this time around. On top of that, Intel is also making these processors have ‘infinite Turbo time’, meaning that with the right cooling, users should expect these processors to run up to the Turbo power indefinitely during heavy workloads. Intel giving both numbers is a welcome change, although some users have criticized the decreasing turbo power for Core i7 and Core i5.

As we reported last week, here are the processors shipping today:

Processors that have a K are overclockable, and those with an F do not have integrated graphics. The graphics on each of the non-F chips are Xe-LP graphics, the same as the previous generation.

Suffice to say, from the perspective of a hardware reviewer, this launch is a difficult one to cover. Normally with a new processor we would run A vs B, and that’s most of the data we need aside from some specific edge cases. For this launch, there are other factors to consider:

Every new degree of freedom to test is arguably a doubling of testing, so in this case 23 means 8x more testing than a normal review. Fun times. But the point to drill down to here is the last one.

Windows 11 is really new. So new in fact that performance issues on various platforms are still being fixed: recently a patch was put out to correct an issue with AMD L3 cache sizes, for example. Even when Intel presented data against AMD last week, it had to admit that they didn’t have the patch yet. Other reviewers have showcased a number of performance consistency issues with the OS when simply changing CPUs in the same system. The interplay of a new operating system that may improve performance, combined with a new heterogeneous core design, combined with new memory, and limited testing time (guess who’s CPUs were held in customs for a week), means that for the next few weeks, or months, we’re going to be seeing new performance numbers and comparisons crop up. 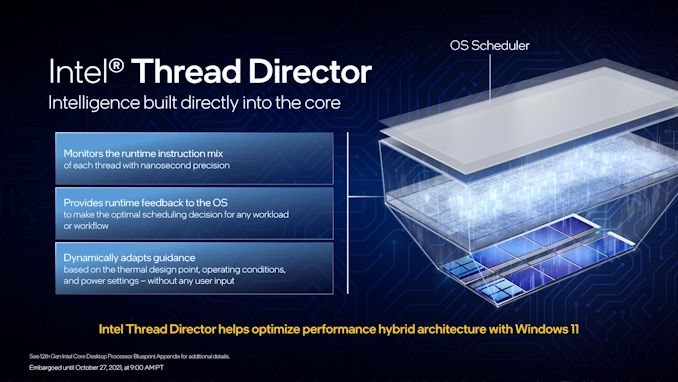 From Intel’s perspective, Windows 11 brings the full use of its Thread Director technology online. Normally the easiest way to run software on a CPU is to assume all the cores are the same - the advent of hyperthreading, favoured core, and other similar features meant that add-ins were applied to the operating system to help it work as intended at the hardware level. Hybrid designs add much more complexity, and so Intel built a new technology called Thread Director to handle it. At the base level, TD understands the CPU in terms of performance per core but also efficiency per core, and it can tell P-core from E-core from favoured P-core from a hyperthread. It gathers all this information, and tells the operating system what it knows – which threads need performance, what threads it thinks needs efficiency, and what are the best candidates to move up or down that stack. The operating system is still king, and can choose to ignore what TD suggests, but Windows 11 can take all that data and make decisions depending on what the user is currently focused on, the priority level of those tasks, and additional software hooks from developers regarding priority and latency.

The idea is that with Windows 11, it all works. With Windows 10, it almost all works. The main difference Intel told us is although Windows 10 can separate cores apart, and hyperthreads, it doesn’t really understand efficiency that well. So its decisions are made more in regards to performance requirements, rather than performance vs efficiency. At the end of the day, all this should mean to the user is that Windows 10 tries to minimizes the run-to-run variation, but Windows 11 does it better. Ultimate best-case performance shouldn’t change in any serious way: a single thread on a P-core, or across several P-cores for example, should perform the same.

This review is going to focus on these specific comparisons:

Normally when a new version of Windows is launched, I stay as far away from it as possible. On a personal level, I enjoy consistency and stability in my workflow, but also when it comes to reviewing hardware – being able to be confident in having a consistent platform is the only true way to draw meaningful conclusions over a sustained period. Nonetheless, when a new operating system is launched, there is always the call to bulk wholesale move testing to a new platform. Windows 11 is Windows 10 with a new dress and some details moved around and improved, so it should be easier than most, however I’m still going to wait until the bulk of those initial early adopter issues, especially those that might affect performance are solved, before performing a flat refresh of our testing ecosystem. Expect that to come in Q2 next year, where we will also be updating to NVMe testing, and soliciting updates for benchmarks and new tests to explore.

For our testing, we’re leveraging the following platforms:

All other chips for comparison were ran as tests listed in our benchmark database, Bench, on Windows 10.

Highlights of this review