Behold, the power of a single button! It's amazing how much trouble you can cause with something so simple. Wars have been started (okay - mostly fictional), people have died, and computer hardware has refused to work… all because of a little round object yelling "PUSH ME!" But I'm getting ahead of myself; let me back up a bit. This weekend was pretty interesting in terms of computer problems. One issue turned out to be minor, affecting one person; the other was quite a bit more painful and affected many people. Naturally, I'm going to comment on the one that affected the single person, in part because I'm the one person, and in part because I just don't know enough about the other issue. It all started Friday evening….

I have two systems that I use on a regular basis, my work computer and my play computer. Neither system is a slouch, but sometimes it's just a bit safer to keep work separated from play. The work computer contains a CrossFire X1950 XTX graphics configuration running in a 975X motherboard, paired with an overclocked QX6700 (10x333 = 3.33GHz), so the system is obviously capable of running games. The gaming computer on the other hand runs a single 8800 GTX on a P965 motherboard with an overclocked E4400 (9x333 = 3.0GHz). Bolth systems are running Windows Vista 32-bit with 2GB of memory. Despite the fact that I just called these my work and play computers, the problem occurred on my work system, and it involved running a game.

It begins with CrossFire; for whatever reason CrossFire never worked properly on the system, at least under Windows Vista. At one point, I actually thought I fried one of the graphics cards because whenever I enabled CrossFire mode I experienced severe graphical corruptions - flickering blue or green spots, often an indication that memory is failing. I decided I would try the latest AMD ATI Catalyst drivers (upgrading from version 7.8) to see if things were any better. The good news is, CrossFire now appears to work on the system (more or less) and I'm no longer experiencing graphical corruption. Not surprisingly, after loading up a game for a quick test (Half-Life 2: Episode Two), I ended up staying a bit longer.

While gaming, I eventually noticed that the audio didn't sound correct. I checked the audio settings and configured the game for 5.1 audio, then I exited the game in order to fix my Windows speaker settings. As expected, Windows was configured for two speakers, which I corrected. And that's where the trouble started.

Windows Vista includes a little audio which it that lets you verify the speakers are working properly. You click on a picture of a speaker and it makes a sound. Four of the six speakers worked properly; the center speaker and a subwoofer... nada! I also checked a few games, and discovered that there were definitely some problems. In F.E.A.R. for example, I could hear music but I couldn't hear any of the weapons fire or explosions. (I noticed this while verifying that CrossFire was working.) If my brain were functioning, I wouldn't be writing this blog entry, but even the best of us make mistakes on occasion. Being a complete electronics nerd, I naturally overlooked any simple explanation and started trying to troubleshoot things. (KISS - that's "Keep It Simple, Stupid" - is only for wusses, right?)

My first thought: maybe the overclock is causing problems. Restart, enter BIOS, update settings, save and exit... nope. I recently moved, so the next guess was that I had connected my speakers improperly, so I began fidgeting with the wires on the subwoofer. I eventually determined that all of the speakers were working, so obviously the problem had to be the integrated audio on my motherboard.

Now, I had a Sound Blaster X-Fi card that I removed from this system when I upgraded to Windows Vista. For whatever reason, Creative's card really didn't like my motherboard, causing BSODs and/or a hard-locked system as soon as I installed the drivers. The latest Catalyst drivers fixed my CrossFire problem, however, so I was willing to give it a second shot. Thus began several hours of downloading drivers, installing them, watching my system crash, swapping around cards, changing BIOS settings, etc. I never did manage to get the X-Fi card to work properly, though I did hear corrupted audio playback a few times before the system crashed.

At this point, I was seriously flummoxed. I played quite a few games on this system several months ago - back when it was my gaming computer and I was using an Opteron 165 as my work computer - and I knew that there were no problems with the audio back then. Either I messed something up while moving last month, or I was overlooking something. I retraced my steps, re-examined my assumptions, and finally the light clicked on upstairs: 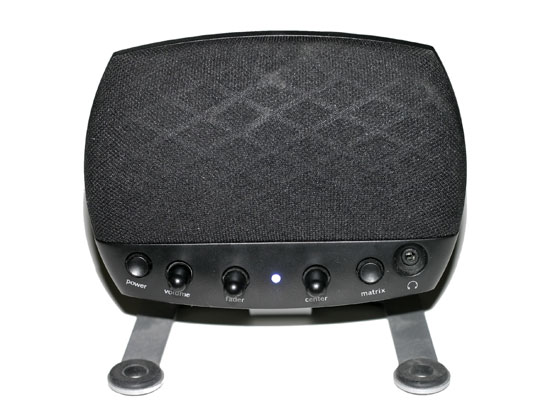 Does anyone else out there use Logitech Z-640 speakers? If so, you're probably laughing at me right now. Logitech, in their wisdom, included a "Matrix 3D" button on the center speaker. It takes stereo audio sources and plays them on all five speakers. I've never really cared for the effect, and truthfully I forgot all about this option. Unfortunately, Matrix 3D also appears to cause problems when you're not playing a stereo audio source, problems like your center speaker and subwoofer no longer making sounds. DOH! Apparently, the button got pressed during the move. Push button, reassemble computer (after removing the X-Fi card), and in less than a minute everything is back to normal… minus five hours of my life.

It's too bad that not all computer problems are as easy to fix. I'm sure our server admin would have been thrilled if the server issues we experienced early Monday morning could be fixed by pushing a button. Moral of the story: Don't forget to KISS and make up when your computer has problems; the real culprit might be staring you in the face.