Our journey starts with SYSMark 2007, the only all-encompassing performance suite in our review today. The idea here is simple: one benchmark to indicate the overall performance of your machine.

SYSMark is an example of what a mostly dual-core workload looks like. The 6-core advantage is nil, although the very large L3 cache makes up for it. In this case the Core i7 970 is just slightly slower than the quad-core 975. 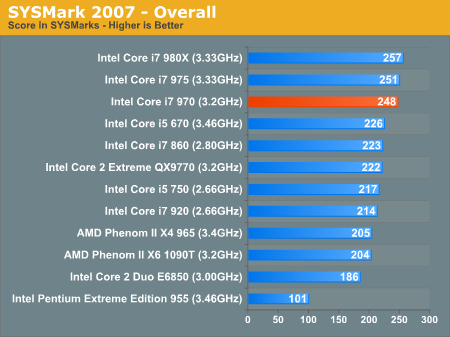 To measure performance under Photoshop CS4 we turn to the Retouch Artists’ Speed Test. The test does basic photo editing; there are a couple of color space conversions, many layer creations, color curve adjustment, image and canvas size adjustment, unsharp mask, and finally a gaussian blur performed on the entire image.

The whole process is timed and thanks to the use of Intel's X25-M SSD as our test bed hard drive, performance is far more predictable than back when we used to test on mechanical disks.

Time is reported in seconds and the lower numbers mean better performance. The test is multithreaded and can hit all four cores in a quad-core machine. 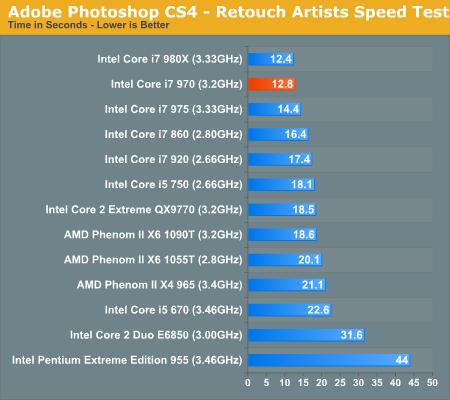 We loved the 980X for Photoshop use when it launched, and the 970 is no different. Photoshop can use the extra cores, although the performance difference isn't huge it's there.

Our DivX test is the same DivX / XMpeg 5.03 test we've run for the past few years now, the 1080p source file is encoded using the unconstrained DivX profile, quality/performance is set balanced at 5 and enhanced multithreading is enabled. 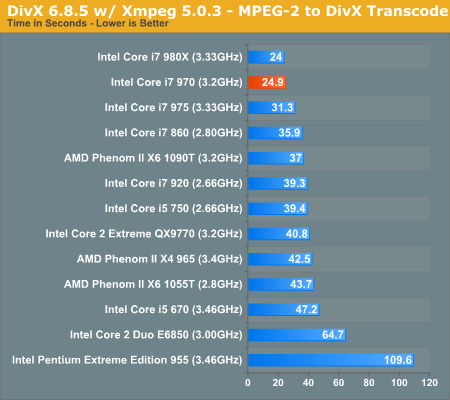 Video encoding is where it's at with the 6-core Gulftown processors. The 970 is hot on the heels of the 980X.

Graysky's x264 HD test uses x264 to encode a 4Mbps 720p MPEG-2 source. The focus here is on quality rather than speed, thus the benchmark uses a 2-pass encode and reports the average frame rate in each pass. 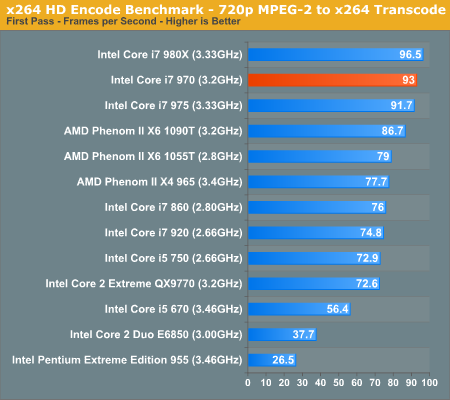 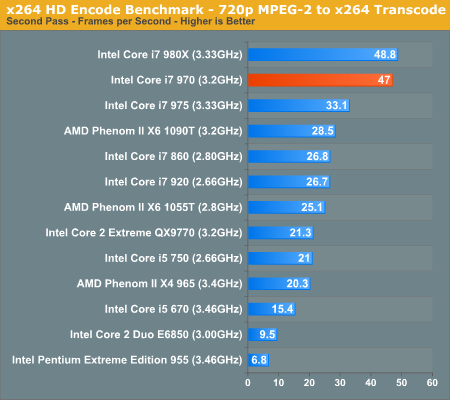 There's no replacement for core count in these heavily threaded workloads. The 970 is over 40% faster than the Core i7 975 and gives you 96% of the performance of a Core i7 980X.