In and Around the SilverStone Sugo SG05

The great thing about reviewing these Mini-ITX cases is that oftentimes there just isn't a whole lot to them, and that's true of the SilverStone Sugo SG05. This is the smallest case I've reviewed yet (at least until the impending review of the Antec ISK 110), and SilverStone makes smart use of the entire space. You can get most of the information you need just by looking at the case, and in fact when I went to assemble it I found myself checking the manual just to make sure it really was this simple.

The front is a clean black plastic bezel with sharp lines. On the right are the pair of USB 3.0 ports, the indicator LEDs, and two very small power and reset buttons, while the top of the fascia features the slimline optical drive bay. Of course the star of the show is the beefy 120mm intake fan at the center, and this 120mm fan represents the bulk of the cooling system. It isn't the most attractive thing in the world, but it's very functional as you'll see later on. 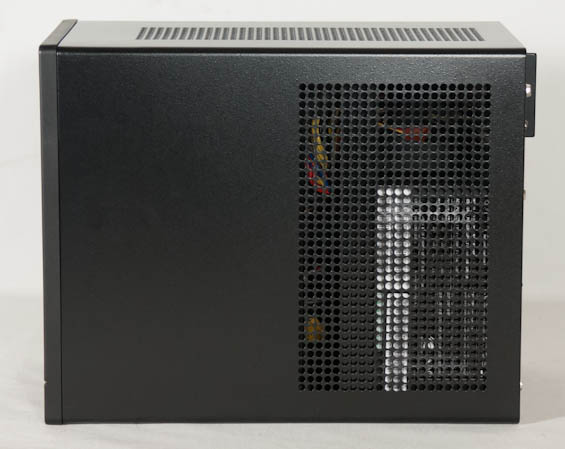 When you look at the top and sides of the SG05, you see how SilverStone is managing the rest of the case's thermals: copious, copious ventilation. This type of design choice winds up being a bit of a double-edged sword; there's nothing keeping the internal fan noise internal, but it also allows enough cool outside air to reach the components that the fans don't have to work as hard in the process. In my experience, smart airflow design can oftentimes be more conducive to keeping noise down than any kind of sound dampening material. Where I do think SilverStone misses the boat a little bit is the back. There's the expected extrusion to cover the expansion slots, but I feel like they could have and should have ventilated the space between the downward-facing PSU and the I/O cluster.

Popping open the SG05 reveals a very straightforward internal design. Given the fact that none of the case's dimensions exceed a foot, there just isn't space inside for any kind of chicanery; every inch must be accounted for. With that in mind, there's a removable support bar for the PSU (not strictly necessary but a nice touch) and the 3.5" drive cage and optical drive/2.5" drive cage are removable. That's it. There's the 120mm intake fan in the front, the cluster of headers for the case's I/O, and motherboard standoffs built into the bottom, but that's the extent of it. 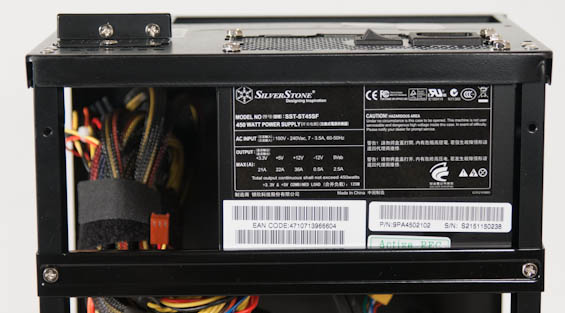 Finally, SilverStone includes a very robust power supply with the SG05. The 450-watt unit is 80 Plus Bronze certified, and has a healthy 36 amps on the single 12V rail. This should be adequate for just about any video card you can actually fit inside the enclosure; NVIDIA's recent GeForce GTX 660 Ti may very well be an ideal candidate.

For how simple the SG05's design is, though, I feel like there's a bit of wasted potential here. The optical drive cage probably could've supported a pair of 2.5" drives side-by-side on the underside without interfering with the expansion slots, or alternatively could've included some means of mounting a 2.5" drive to the optical drive area. Interestingly, SilverStone opts not to include one of their 120mm Air Penetrator AP121 fans in the front, sticking with a more conventional fan. The AP121 can get a little noisy, though, and they may have just elected to err on the side of silence.