In and Around the SilverStone Sugo SG09

Pulling the SilverStone Sugo SG09 from the box and checking it out from all the angles, it almost feels like a little bit of a chimera. For sure, SilverStone has done a good job producing a fairly aesthetically pleasing design, but the odd bulges and vents along the sides are suggestive of the crafty internal layout required for getting a fairly fully-featured Micro-ATX enclosure down to this size. In fact, the SG09 doesn't even actually sit evenly on flat surfaces without the included adhesive feet being affixed to it due to the lip of one of the removable panels actually being on the underside of the case.

SilverStone has chosen to be fairly conservative in their material choices with the SG09, opting for plastic and steel instead of aluminum. The front fascia has an attractive, symmetrical design that's fairly typical of SilverStone, with a removable filtered vent beneath the slot-loading optical drive bay as well as additional ventilation below the power and reset buttons and port cluster. This front fascia is pretty much the only plastic you'll find on the SG09 outside of the removable vent covers for the top and side fans. 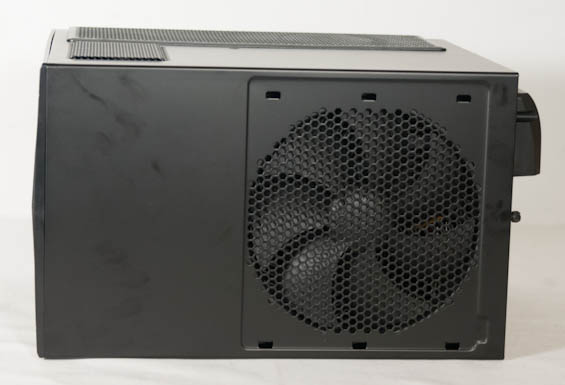 Speaking of the top and sides, the top of the case is where you'll find the biggest clue to how SilverStone plans for the SG09 to work its magic: a whopping 180mm Air Penetrator fan that's actually facing down as an intake instead of an exhaust. It's true SilverStone PR plays up natural convection as a selling point for their 90-degree rotated motherboard case designs, but the reality is that those cases are so effective because of the direct airflow on the motherboard, CPU, and components and not because of the direction of that airflow. Undoubtedly they know this, too, as this is the second case I've reviewed by them that has a top-mounted intake fan. 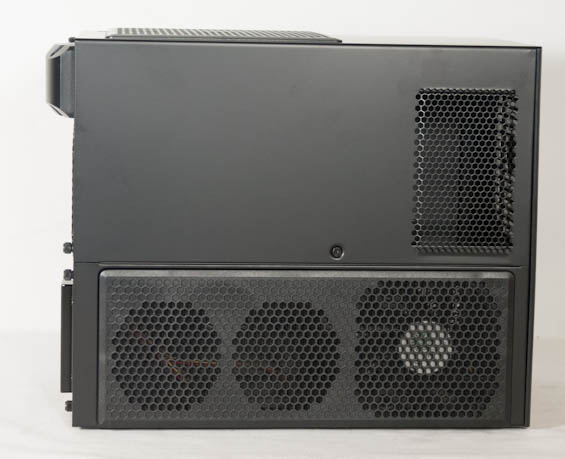 When you get to the sides, you'll see a slight bulge on the right side that gives the cabling from the power supply some additional room to breathe along with a small vent at the bottom for an optional 80mm fan. On the left side there's a big power supply sized vent along with a single 120mm intake fan and room for additional 80/92mm fans. You'll also see the left side is actually split between a top wraparound panel and a bottom "fan panel," with a screw in the side where you ordinarily never expect to see one.

Finally we get to the back, where we can see how the power cable is routed out; the bulk of the SG09 is pretty much just the space required to house a Micro-ATX board and tower cooler along with the 120mm exhaust and a healthy amount of space behind the motherboard tray. As you've probably sussed out, they moved the power supply to the front of the case and in a way it seems to do what good small form factor designs do in my experience: segregates cooling zones using the size of the components themselves. 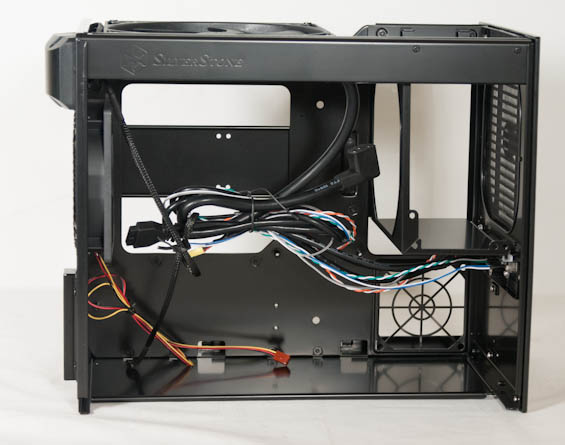 Opening the SG09 up requires removing five thumbscrews on the back along with one screw on the side and one on the bottom; that allows you to remove the large top wraparound panel and the lower fan panel. And when you get inside, how SilverStone managed to fit so much in one space begins to come together. Opting for a slimline optical drive saves a ton of space, and behind the motherboard tray there's room for four 2.5" drives and three 3.5" drives, but even SilverStone recommends eschewing 3.5" drives entirely. That's a sound plan, as again, 3.5" drives take up a lot of space as well. Ultimately they've been able to condense their case down to: motherboard, power supply, video card(s). Not too shabby.

While I'm impressed with the SG09's design, I'm also amused at just how aggressively SilverStone culls space. In some ways they went the complete opposite direction of BitFenix with the Prodigy; BitFenix tried to cram as much capacity into a Mini-ITX case as possible, while SilverStone's design requires a more specialized approach to really maximize it. They culled everywhere they could in an effort to shrink the design down, and that meant pushing for smaller form factor components as well. I admire the approach, but it may not be for everyone.