In and Around the Rosewill Line-M

Working with the Rosewill Line-M made me feel downright nostalgic. It doesn't suffer from the same kind of poor build quality (and comically optimistic price tag) of the Moneual Sonamu G100 I reviewed some time ago, but I couldn't help but want the Line-M in beige, if you catch my drift.

The front of the Line-M is all business. It's a black plastic fascia and features two external 5.25" bays and a single 3.5" bay for the inevitable card reader. Beneath the drive bays are the I/O cluster and power and reset buttons, and then below them is a large vent for the 120mm blue LED intake fan. A blue LED fan is kind of an oddball choice for a case like this that seems destined to be hanging out under desks in home offices, and it does stick out some. 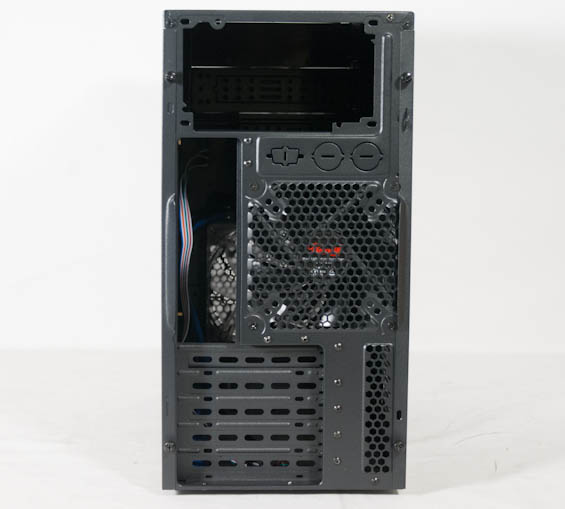 When you check out the top, sides, and back, there are the subtle hints of a more modern case design (if the USB 3.0 ports didn't give it away). The left side panel features two vents with 92mm/120mm fan mounts, and the back of the case sports a fifth expansion slot for users who somehow deign to install a multi-GPU configuration in the Line-M. The irony there is that I'm reasonably certain the case is actually perfectly adequate for it.

The side panels are held in place by thumbscrews, and while I hate notched panels, they're at least expected in a case this inexpensive. That there's a loop in the back for a padlock is an indicator of where this case is supposed to go, but that loop also helps line up the side panel and makes it easier to slide on without bending the notches. Get those panels off, though, and you'll see there's no space at all behind the motherboard tray. 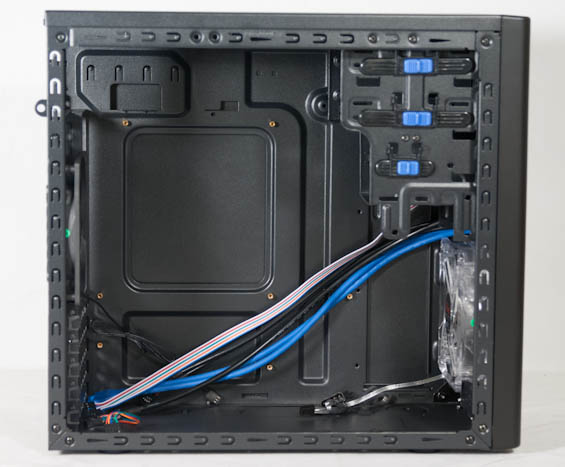 As for the interior itself, Rosewill's design is very minimal but also uses space very efficiently. I think it's important to remember (and you'll see what I mean later) that there are good reasons to mount the power supply to the top of the case instead of the bottom. Currently the biggest albatross hanging around the neck of case design is the 5.25" bay, but lining up the power supply behind the 5.25" bays at least winds up using space efficiently and lowers the motherboard so the case's intake has a more direct line to the CPU cooler.

Undoubtedly the whole of the Rosewill Line-M is going to look downright archaic. I've been watching the technology of case design continue to advance since I began reviewing cases here, and seeing a build that doesn't include a lot of modern designs is kind of curious. With that in mind, though, I still feel like Rosewill's overall design is a very efficient one in terms of space and apropos to what the case is intended for. But why the blue LED fan?