The two subjects we want to examine with the DigitalStorm Virtue and its 4.4GHz Intel Core i7-4770K are whether or not the overclocking plateau really has stayed level over the past two or three generations of Intel CPUs, and just how close GK104 can really get to GK110. Remember that the GeForce GTX 770 actually ships with memory clocks higher than most GTX 680s could attain, and memory bandwidth was frequently the bottleneck with GK104.

As for the overclocked GTX 680 against the GTX 780, that's a bit trickier. The 780 is working with almost 50% more memory bandwidth, and with some extremely dirty math, about 20% more shader power. That's before you try to calculate the GTX 780's boost clocks, which are much jumpier than the GTX 680's. Even missing an entire SMX cluster, GK110 is still a bear compared to the more svelte GK104. 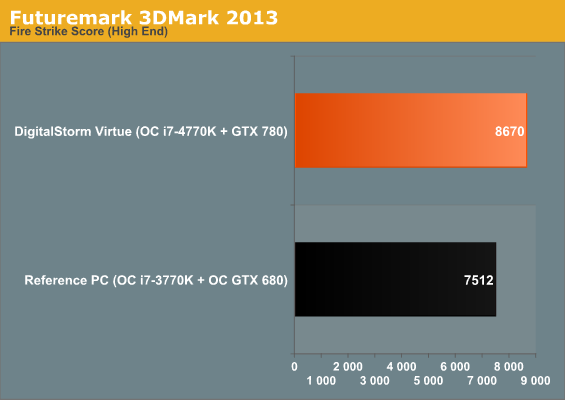 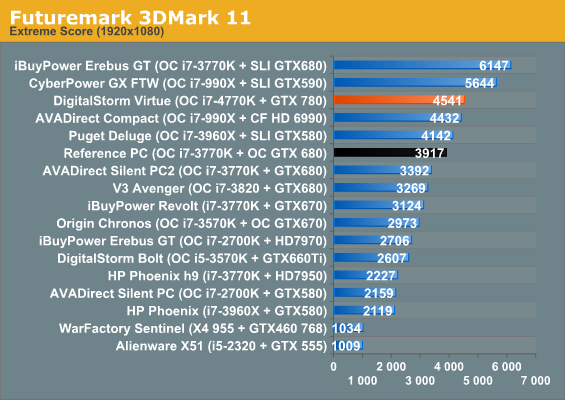 The 3DMarks pretty much tell the story. In both 3DMarks, a stock 780 is still ~15% faster than a heavily overclocked GTX 680. 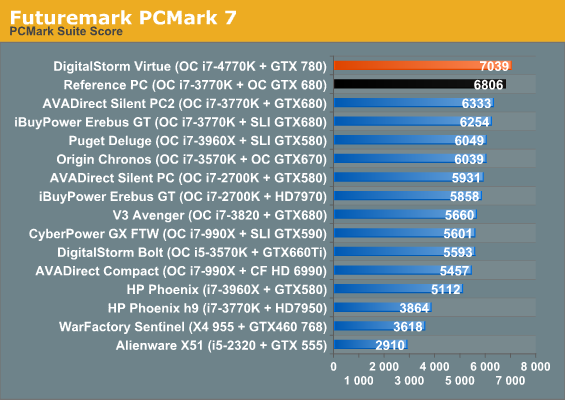 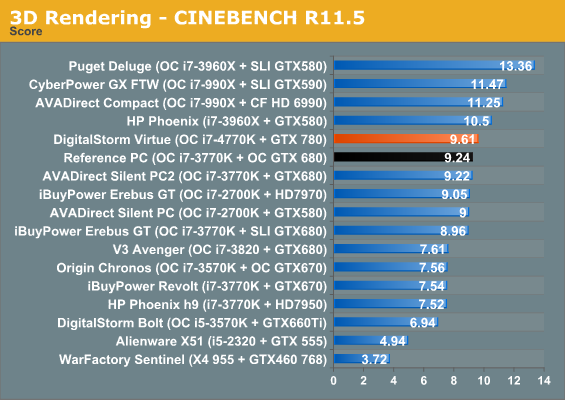 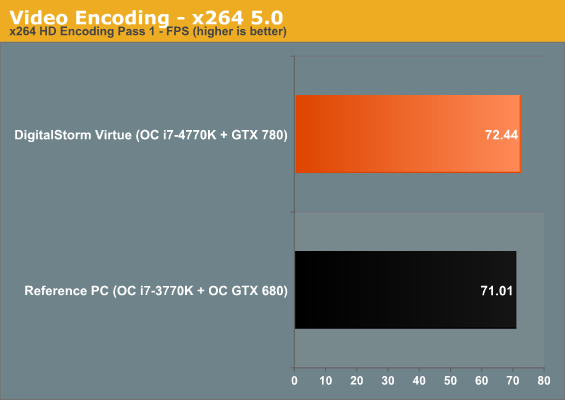 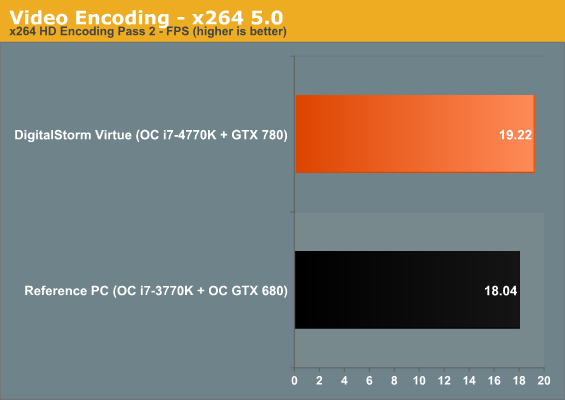 While PCMark7 tends to simply favor newer, faster SSDs, the difference between Haswell and Ivy gets a lot uglier when we isolate CPU performance. Consensus is that we've lost a bit of overclocking headroom with Haswell, making the comparison between a 4.6GHz Ivy and 4.4GHz Haswell a reasonably fair one. Cinebench is just 5% faster on Haswell, the first pass of the x264 benchmark is a dismal 2% faster on Haswell, and the second pass is at least a slightly healthier 7%.

The math gets even uglier when we compare Sandy to Haswell. A 4.4GHz i7-4770K is only 6% faster than a 4.6GHz i7-2700K. That means that in two subsequent generations, the performance ceiling has barely moved. Anand is keen to point out that Intel's ability to eke out ~10% additional IPC on the same 22nm process node with a new architecture is impressive, and that may be true from a technical perspective, but Intel has offered enthusiasts virtually nothing new for two generations running. So whether or not the technical achievement is notable, end users are still left holding the bag. At this point, if you're hankering for more performance on the CPU, your best bet is actually to either go for an i7-3930K or wait for Ivy Bridge-E and hope Intel doesn't bone us with thermal paste instead of fluxless solder again. The only real selling point of Haswell, as far as I'm concerned, is access to the Z87 chipset.

Thankfully, while the jump in price from the NVIDIA GeForce GTX 680 to the GTX 780 isn't a particularly happy one, at least that dial moved pretty substantially. We tested every game at our Enthusiast settings (essentially maxed out and topping out at 4xMSAA), at 1920x1080 and then at 5760x1080.

So how do we interpret these results? First, excluding the outlying Skyrim surround results, even a diehard overclocked GTX 680 user can expect to net at least 10% more power from the GTX 780. Bumping up to 5760x1080 actually even lets the GTX 780 start to stretch its legs; while the 680 seems to be limited either by memory capacity or memory bandwidth, the 780's 384-bit memory bus and extra 1GB of GDDR5 do a solid job of picking up the slack.

Remember, too, that this is all before you overclock the 780. The consensus right now seems to be that the 780 has a very healthy amount of overclocking headroom, more than the 680 did, so if you're willing to sacrifice some power consumption and noise, you can theoretically push the 780 to Titan levels and even a bit beyond. At that point, it will pull away substantially from the 680 and by extension, the 770. I'm planning to do a custom liquid cooling review in the near future to get a grasp of just how far we can reasonably push a pair of GTX 780s, and given that I regularly see boost clocks of about 1GHz on them with just air cooling and no overclocking, I'm pretty optimistic.