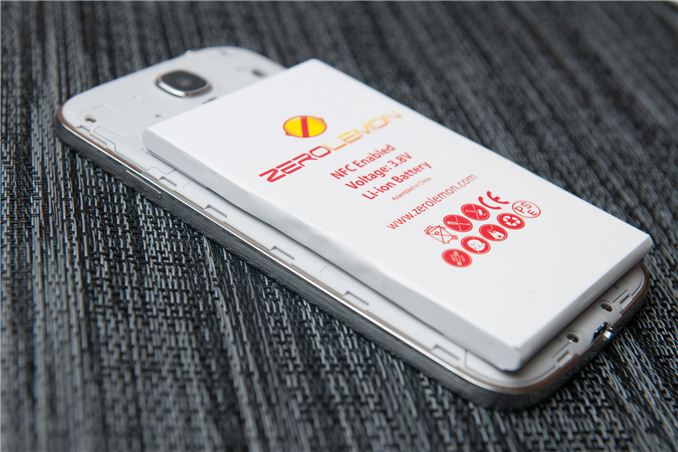 One of the chief differentiators with the Samsung Galaxy S 4 versus other current flagship Android devices is the continued support for user-replaceable batteries. Although removable batteries are becoming increasingly scarce as industrial designers prioritize aesthetics and thinner profiles, being able to swap batteries or substitute in a larger one is still an added convenience if you absolutely need it.

I’ve been carrying the Samsung Galaxy S4 Google Play edition (henceforth SGS4 GPe) alongside the HTC One GPe since getting the two devices, and while I have a Mophie Juice Pack for the HTC One, I didn’t really have a bigger battery solution for the SGS4 GPe. Probably my biggest use case for extended batteries is when I’m traveling, where having a bigger battery often is the difference between being able to relax and searching for an outlet in a terminal. When I saw the ZeroLemon 7500 mAh battery mentioned on Reddit’s r/android and instantly knew I wanted to give it a try and put it through our battery life and charge test routine. 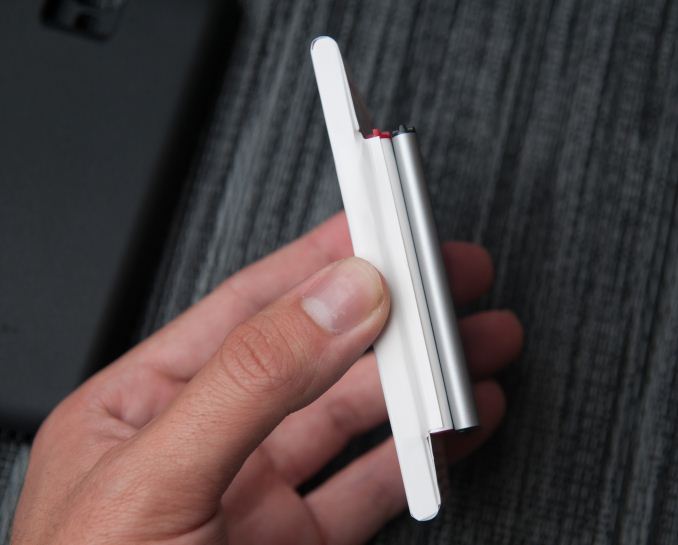 First, the ZeroLemon 7500 mAh battery is considerably bigger than the stock SGS4 battery, which came in at 2600 mAh. Both are 3.8V nominal chemistries, so that works out to 28.5 Whr for the ZeroLemon, and 9.88 for the stock one, a scaling of 2.88 in battery capacity. Because energy density doesn’t change between the two (fundamentally it’s still the same 3.8V Lithium-Ion polymer), the extended battery achieves its larger capacity by increasing volume. As always, this is the tradeoff that industrial designers have to make – increasing battery capacity at present necessitates more volume dedicated to it. 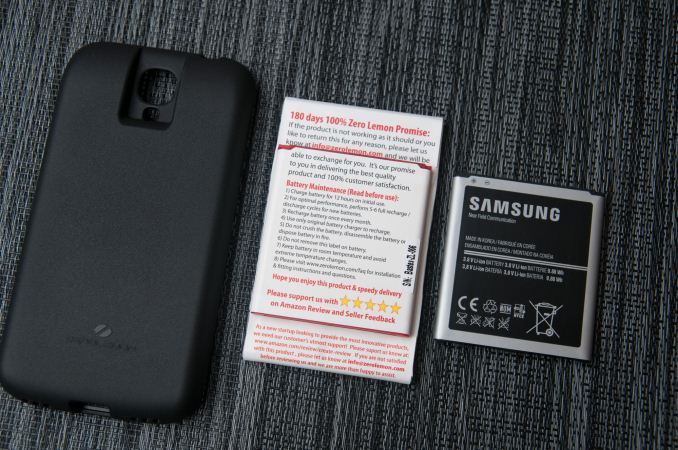 The extended battery is really two pieces. The first is shaped like the stock battery and fits inside the housing, the second seems to be two larger cells above it which protrude from the back of the SGS4. As a result, the extended battery requires a different kind of battery cover entirely. 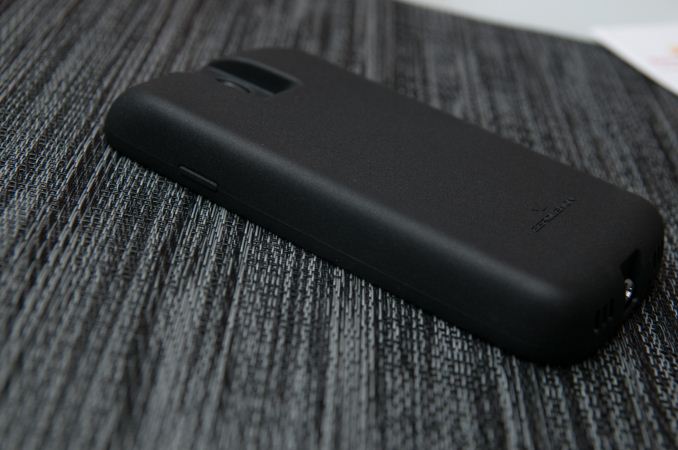 The ZeroLemon’s battery cover isn’t so much a door as it is a rubberized case that fits on and wraps around the SGS4. It covers the volume rocker and power buttons, and imparts a somewhat squishy feel to them. There are also holes for the microphone, headphone jack, IR Tx/Rx port, and at the bottom microUSB and speakers. The rear facing speaker on the SGS4 gets covered up somewhat, although sound still leaks between the battery and chassis and out the grille at the bottom. The far bottom of the battery does somewhat occlude the lower primary Tx/Rx antenna on the SGS4, although I haven’t seen a dramatic change in RF performance.

Obviously the weight and size of the SGS4 changes with the case and extended battery installed, the question is how much. The tradeoff with the bigger battery is that the SGS4 gets considerably bigger, but not unwieldy so. It’s a big phone for sure though.

I ran our normal smartphone battery life test suite on the SGS4 GPe with the big battery installed. This is the same test we’ve run for a while now with the display set to 200 nits exactly and loading through a number of pages on a schedule, over both WiFi and cellular (in this case for consistency with the previous GPe test, still T-Mobile LTE). Obviously the results speak for themselves here, runtime with the big 2.8x size battery is huge. 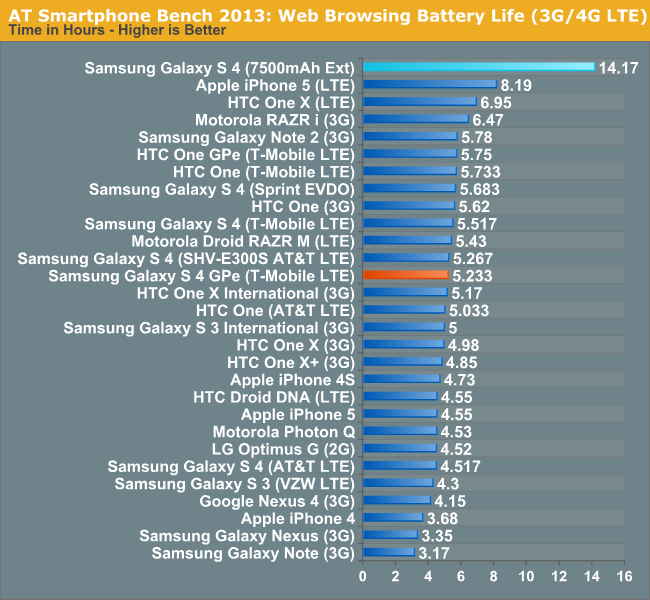 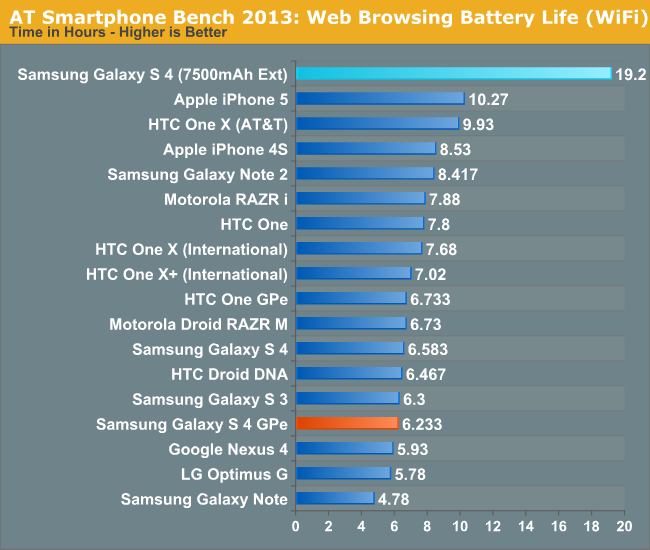 On the cellular test, we see a 2.7x scaling, very close to the expected 2.8x scaling given the increase in battery. On the WiFi test, we see just over 3x scaling, even better. I previously had no issues getting through a day with the stock SGS4 battery, I’d expect with the nearly 3x scaling you could possibly get 3 days of use out of this combo. 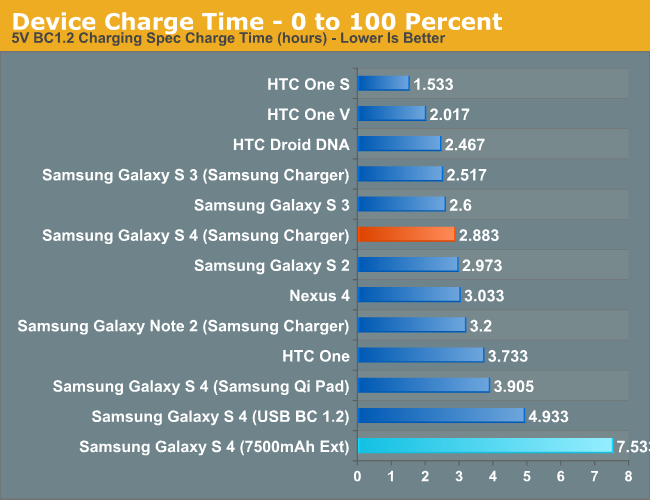 The other tradeoff is of course an increase in charge time. Samsung is in a better position here thanks to the availability of 2 Amp (10 watt) charging using their supplied charger which includes proprietary 1.2V signaling on D+/D- pins. Unsurprisingly charge time goes up as well with the ZeroLemon, and even with that Samsung 2 Amp charger, it takes 7.5 hours to charge the ZeroLemon battery from completely empty. With this much charge time, it’s clear to me that without increased charging current this is effectively the maximum practical battery size for the SGS4, given the expectation that you can plug your phone in dead when you go to sleep and wake up with it fully charged (and sleep 8 hours a night). If you use the wrong charger (USB BC 1.2 compliant), a full charge could take just over 12 hours given this same scaling.

If you’re willing to make the size and weight tradeoff and want an absolutely huge extended battery for the SGS4, the ZeroLemon 7500 mAh battery seems like a pretty good choice.