As a portable gaming device, Shield is rather unique in that it has essentially two different modes of play. The first is to play games purely on the device, in Android, from the Play Store (and from the Shield Store onboard the device which contains links to Play Store applications). These use the full power of Tegra 4 to run and the onboard controls for gameplay. The second is a beta feature – GeForce PC streaming which enables the Shield to act like a wireless gaming controller and display for games played on the desktop.

Let’s start with the Android gaming situation on Shield.

Here NVIDIA is relying on the gaming ecosystem on Android to make the gaming console a viable option. At present NVIDIA advertises it has 131 total games that work well with Shield, 35 of which it has worked with developers to enhance for Tegra (for Shield) and exposed links to in the Shield store. Including those 35 enhanced titles, it has a list of 131 games which it purports work with the gamepad support in Android and thus work well on Shield. 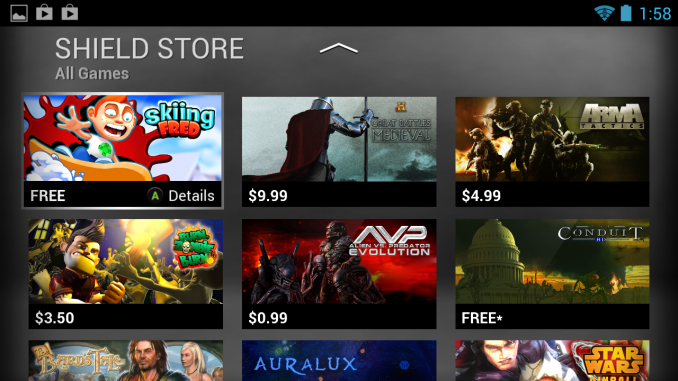 I didn’t get a chance to play with all 131, but chose a smattering of titles from both. Some of the titles that NVIDIA has demoed previously I learned were from that second set (gamepad support, but not necessarily Tegra optimized) and work well on Shield, Android has good gamepad support and clearly NVIDIA has built a good profile for Shield to work with applications which are looking for one. 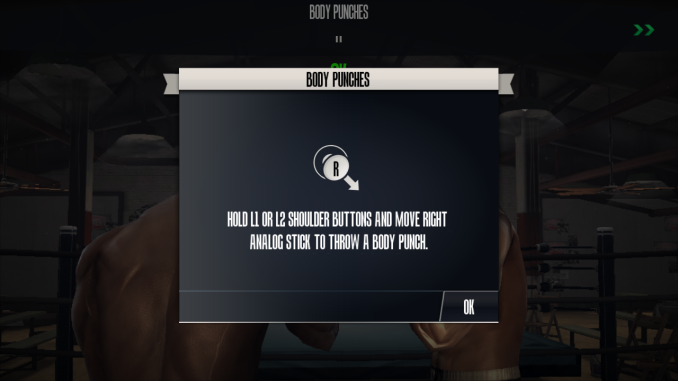 The only friction point is what buttons get called, and sometimes it’s obvious that the developer has tailored them to a specific controller, but most of the time button names in tutorials and game menus are disambiguated enough to be obvious. 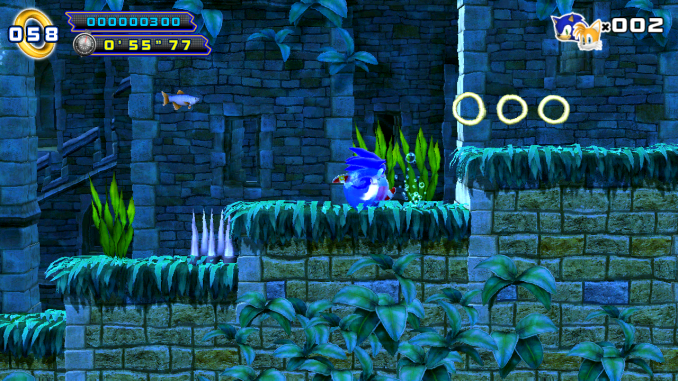 I played Sonic 4 Episode 2 which is a continual NVIDIA tech demo game that both is easy to pick up, plays well, and is decently entertaining. Performance is way better than it was on Tegra 3, it’s butter smooth like you’d reasonably expect on Tegra 4, and the control surfaces work really well. 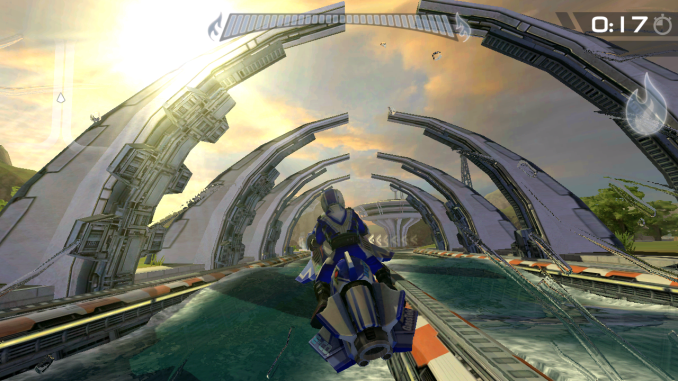 Riptide GP2 is another title that just about everyone shows off thanks to its visuals and easy gameplay. This title is fun and works really well on Shield’s controller, and obviously has some visual assets added for Tegra 4. 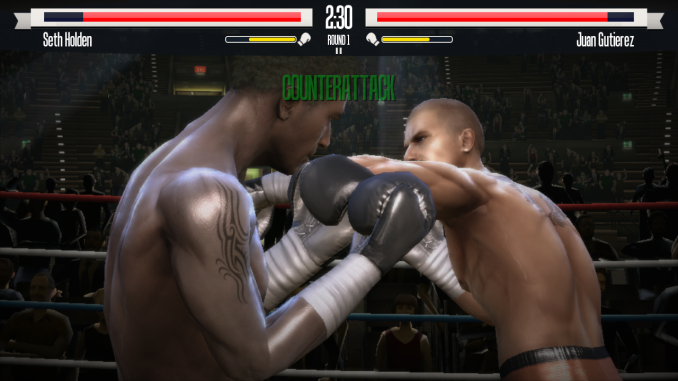 I also played both Shadowgun games, Real Boxing, and Virtua Tennis Challenge, a title which isn’t a Tegra-enhanced game but is another example of a title that works great with the controller support. 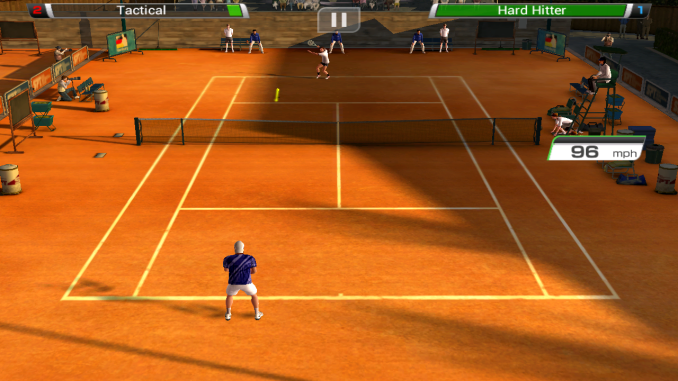 The titles that NVIDIA has worked with developers on seem to work really well, the rest of the Android gaming ecosystem with controller support likewise seems to lend itself natively to Shield. The problem is that there isn’t really a game on Android that draws me in and makes me want to keep playing for hours like there are on the desktop. Even though I spend a lot of time obsessing over Android graphics performance, I’m still looking for the kind of AAA title that Android really needs to sell itself as a gaming platform.

That brings me to NVIDIA’s second option, which involves a desktop PC. For this NVIDIA sent over a Falcon Northwest Tiki with a Core i7–3770K OCed to 4.2 GHz and GeForce GTX 760 inside. The way this second mode works is to use Shield as a portable controller and display for a game played on the desktop. The framebuffer gets grabbed, encoded on the GPU in H.264, sent over WiFi to the device, and the controller input gets piped back to the PC. 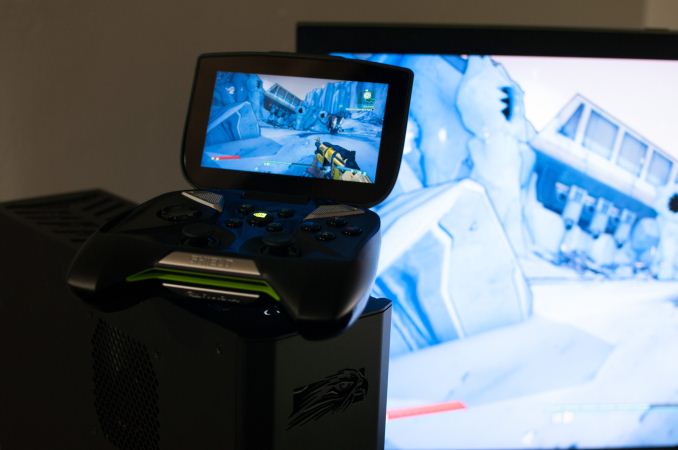 My biggest concern when hearing about this architecture initially was latency and visual quality, and the WiFi link. Since Shield includes 2x2:2 dual band WiFi, most of the wireless link concerns are taken care of – this literally is the best possible WiFi from a connection robustness perspective shipping today thanks to the two streams (and implied diversity). 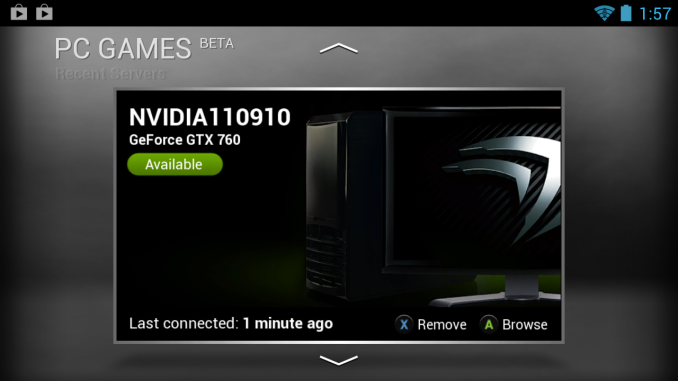 Hit the console button and you can navigate over to a menu showing enabled PCs on the network you’re attached to. Inside that is the list of supported games in the steam catalog which are Shield enabled, and you can then launch and play those. This is enabled using a beta GeForce driver and Steam release at present, and NVIDIA recommends a good dual-band wifi AP for use with it (unsurprisingly) which was an RT-N66U in this case, I used my RT-AC66U which ASUS sent over since it’s 802.11ac enabled. 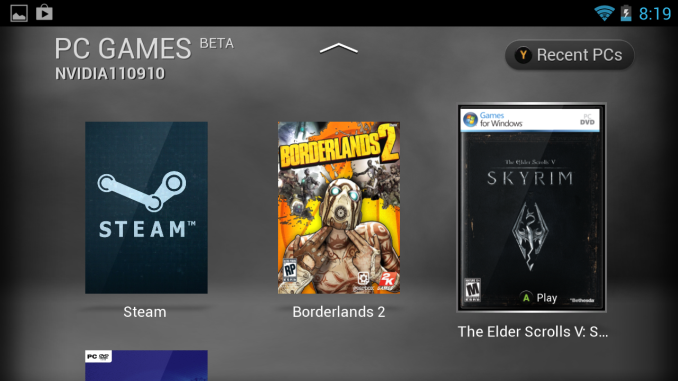 I played a lot of Borderlands 2 on Shield and didn’t really get a chance to try any other titles, but the experience with Borderlands should translate well to other games. In short, the PC games streaming component works surprisingly well. Video quality is great, with the rare stutter or two, and the stream is high quality enough that you can rarely see compression artifacts, which is especially surprising for a game like Borderlands 2 with its unique visual style. The one thing I did notice were audio hitches which happened occasionally, and that audio seemed slightly more delayed than video. 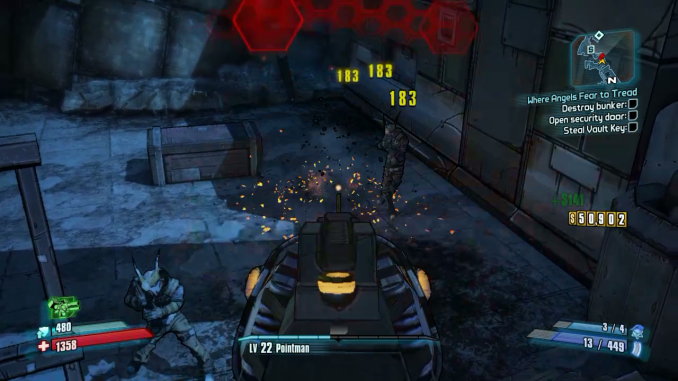 The input latency is very minimal, I had no issues playing Borderlands which can be a bit twitchy and demanding at times. It’s there, but it’s much less than other WiFi mirroring standards like Miracast or AirPlay Mirroring. 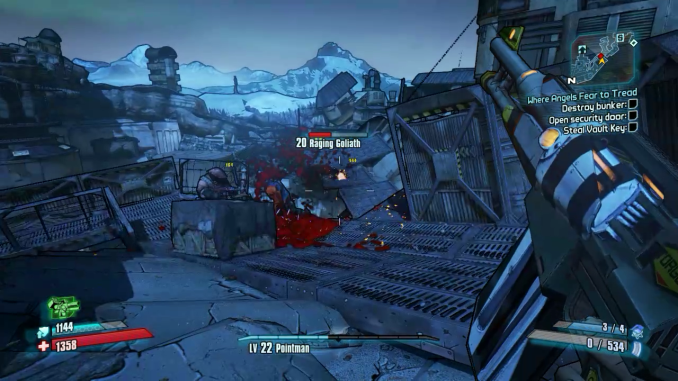 The obvious ultimate goal for NVIDIA is to stick all of the compute on a GRID and in the cloud somewhere, and get boxes spread out in major metro areas to get latency down low enough to make it viable. That’s been the promise of services like OnLive, Gaikai, and so forth for a long time.

I found playing Borderlands from the couch or in bed probably the most fun part of the experience. It’s a lot of overhead and equipment to be able to play games in a different part of the house, but not being in the loud room with all the computers where I work all day made playing Borderlands even more fun. I also had no WiFi connectivity issues throughout my house, that 2x2:2 WiFi was a good choice for sure.

NVIDIA also sent along a Parrot AR Drone 2.0 with Shield. Parrot has optimized their app for Shield, and uses the controller and buttons to control the drone. I’ve been looking at getting into flying quad and octacopter drones myself as a hobby for a while now for taking photos and video with a GoPro Hero 3 Black I purchased, specifically either a DJI Phantom or TBS Discovery and had only briefly played with the AR Drone 2.0. 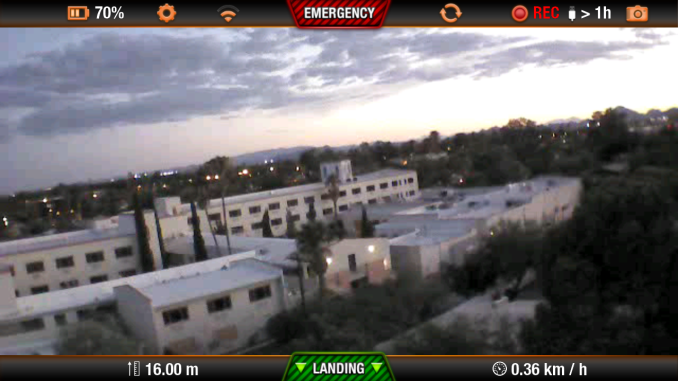 I spent a ton of time playing with the AR Drone 2.0 using Shield. Of course the drone costs another $299, but using Shield to fly it around is awesome. The controls work well, the display makes sense, it’s almost like Shield might be better suited for controlling UAVs and quadcopters than playing games, assuming they all have Android apps. 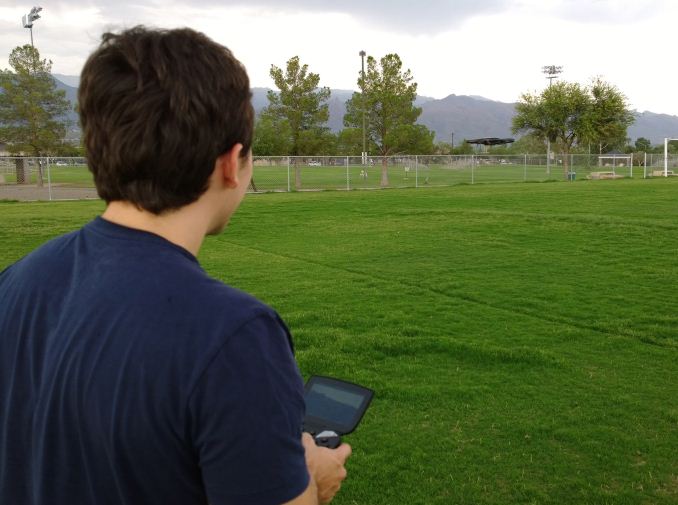 The AR Drone 2.0 Android app gives you a live preview out the front and bottom cameras you can switch between, and of course control of the drone. Video and controls get piped back over WiFi, and it’s even better since Shield has that 2x2:2 WiFi since the range is limited using 2.4 GHz ISM on the AR Drone 2.0. 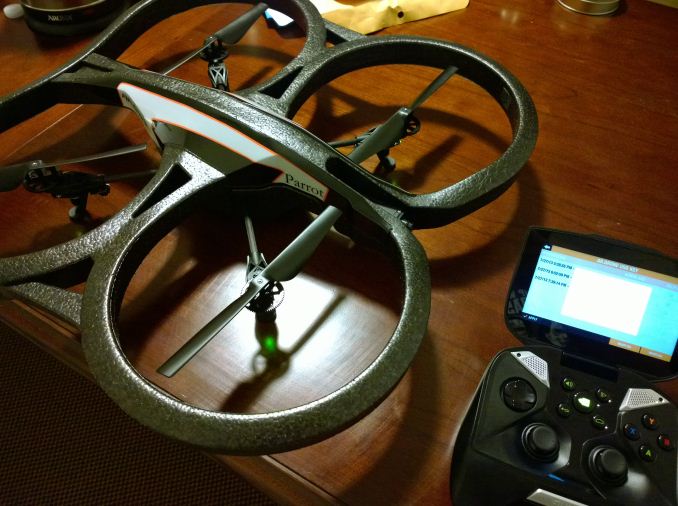 I realize it can’t carry the Shield purchase or experience entirely, but flying around the AR Drone with Shield is a ton of fun. If you have one, that’s just an added bonus I suppose.