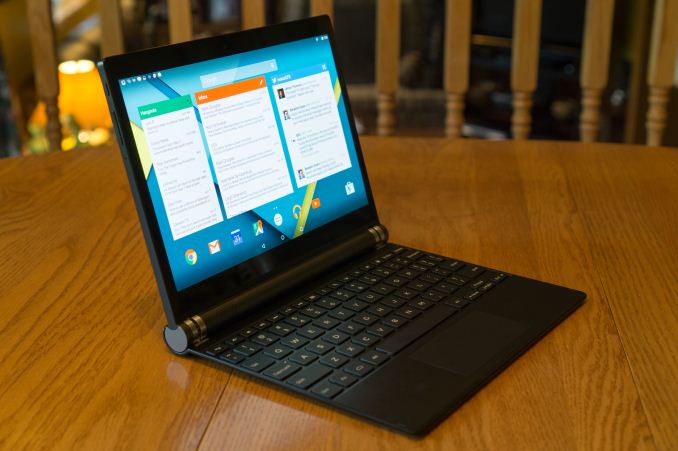 When the first modern tablets were introduced to the market they were primary focused on facilitating content consumption. During the keynote where Steve Jobs unveiled the original iPad, he stated that tablets would need to be better than both laptops and smartphones at browsing the web, reading emails and eBooks, viewing photos and videos, and playing games. These are all tasks where the user is consuming content rather than creating it. As tablets have advanced and become both more capable and more widespread they have become more suitable for content creation purposes. Software companies with long ties to the PC market like Adobe, Autodesk, and even Microsoft have made their software available for iOS and Android. However, these programs are often more limited than their traditional PC counterparts.

While one can put a great deal of work into making interfaces that work well with the touchscreen input of a tablet, there are certain tasks that really require the use of input devices like a mouse. Tablets have their own virtual keyboards, but this still presents issues with the keyboard taking up a great deal of space on the screen, and not providing the tactile feedback of a physical keyboard. These input limitations have given rise to convertible or 2-in-1 devices, where the goal is to either allow a laptop to transform into a large tablet, or to extend the capabilities of a tablet with a dock that includes a keyboard and a touchpad. This brings us to the Venue 10, with Dell choosing the latter option for pairing their tablet with a keyboard and touchpad.

The Dell Venue 10 7040, which I will now refer to simply as the Venue 10, is very similar to Dell's Venue 8 7840 as far as the specifications go. I won't spend a long time going over them, as apart from the obvious changes to size, mass, and display size, it's the same tablet as its younger brother.

Like I said earlier, the Venue 10 is essentially a larger version of the Venue 8 with the same specifications. The same Intel Atom SoC is used, along with the same WiFi chipset, the same camera array, and the same amount of RAM. For this review we've been sampled a 32GB tablet instead of the 16GB model of the Venue 8. Since the Venue 10 is a larger tablet there's a natural increase in battery capacity. We also get Android Lollipop this time around, which is a refreshing upgrade from the Android 4.4 KitKat build that shipped on the Venue 8. Naturally, there's also an increase in price when you move from the 8.4" Venue tablet to the 10.5" model. The 16GB model tablet alone moves from $399 to $499, with a bundle that includes both the tablet and the keyboard dock available for $629. Both of those prices increase by $50 to move to the 32GB model.

The design of the Dell Venue 10 is similar to that of the Dell Venue 8. The chassis is very thin, and highly rectangular with only small curves in the corners. The sides of the tablet are all very flat, and the power button and volume rocker are as well, which creates a very clean aesthetic. Much like the Venue 8, there's a strange protrusion on one edge of the screen. On the Venue 8 this was the edge with the display drivers, speaker, and front facing camera, while on the Venue 10 it's a large metal barrel. This barrel serves a number of functions, the most important of which is how it connects with Dell's keyboard accessory as a rotating hinge. It also houses the tablet's stereo speakers, and much of the battery is housed inside as well. 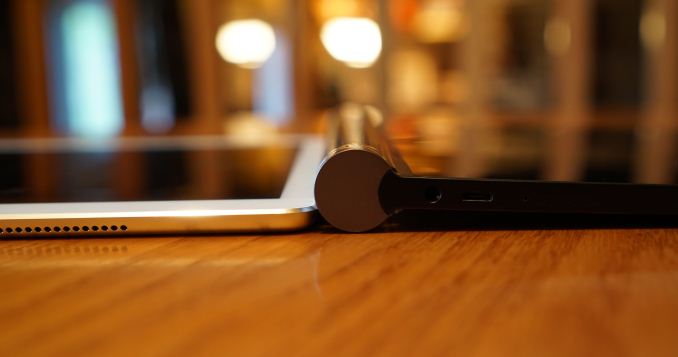 While the barrel has a functional reason for existing, it really takes away from the thinness of the tablet. Even though the chassis is 6.2mm for the most part, the tablet hardly feels thin at all because in any orientation you will inevitably be holding the barrel to some degree in order to alleviate the strain from the weight imbalance it creates. You don't feel like you're holding onto a thin device. Resting it on a table also makes it feel enormous because the barrel places the tablet on a slant. I think the barrel works great when connecting to the keyboard attachment, and I'll discuss that in greater depth later on, but if I didn't plan on using the keyboard it would already be enough to make me look elsewhere for a tablet. 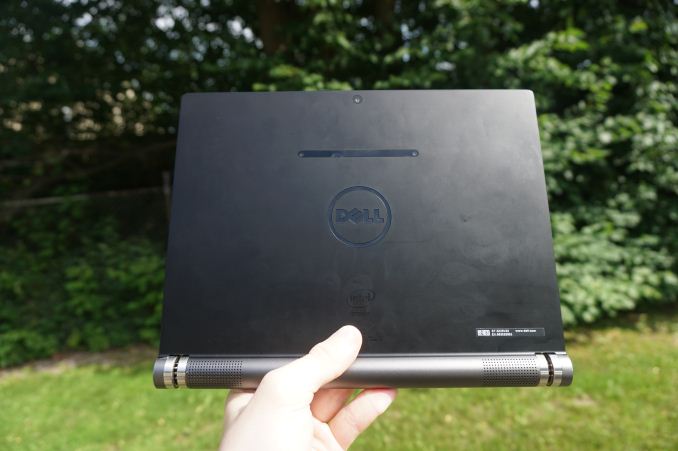 One thing that's really important to note is that the Venue 10 is primarily made of plastic. Many sources, including those that did hands on sessions, have reported that it's made of aluminum. This is not the case, and it's honestly very obvious so I don't know where the confusion arose. The color is completely different from the Venue 8, and it doesn't feel like aluminum at all. Both the keyboard dock and the tablet have the exact same feeling, and if you apply force to the dock you can cause it to bend in your hands which would never happen with an aluminum keyboard of that thickness. It also stays warm to the touch, where an aluminum device will often feel cold if you touch it after leaving it for a while. This is made even more obvious by the fact that the barrel on the end is actually made of metal, and frequently feels colder to the touch than the rest of the chassis. The back cover also picks up smudges in a way that doesn't occur with dyed anodized aluminum.

While I was disappointed that the Venue 10 wasn't made of aluminum like the Venue 8, the rigidity and sturdiness of Dell's smaller tablet has been completely maintained. Unless you press on it with a ridiculous degree of force, you'll never be able to make the back cover flex. Tapping or pushing on it also doesn't produce the sort of creaky noises that you'll get with cheaper devices. It's really important to make it clear that the Venue 10 doesn't feel like a cheap device just because it's not made of aluminum. While I'm not a big fan of the feeling that a plastic device has to the touch, when a tablet is as sturdy as the Venue 10 it still feels very premium. 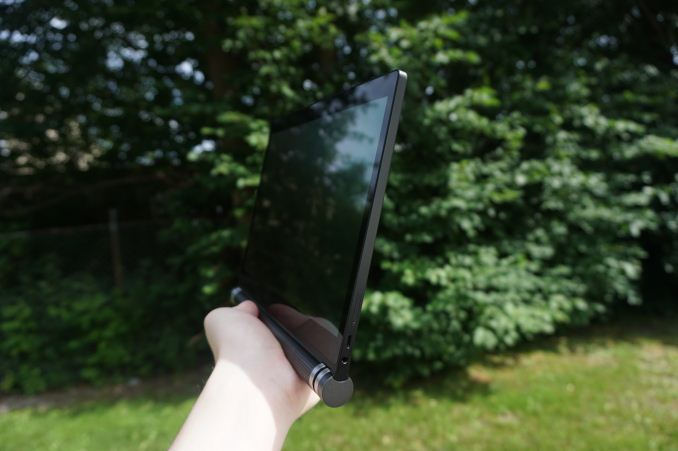 Something that really surprised me about the Venue 10 was how heavy it is for a plastic device. At 597 grams, it's only 3 grams lighter than the old iPad 2, and nearly twice as heavy as the Venue 8. The keyboard dock adds another 446 grams, which puts the full package mass at over a kilogram. What's really shocking is that just the keyboard dock alone, which has no internal battery and is made of plastic, is heavier than the iPad Air 2. It's a very big barrier to usability and portability. When you hold the Venue 10 you'll definitely notice how heavy it is, and how a lot of that weight is concentrated on the side of the chassis with the metal barrel. It's just not as comfortable to use as the Nexus 9 or the iPad Air 2, and you rarely want to bring it with you when you leave the house because it's so heavy. 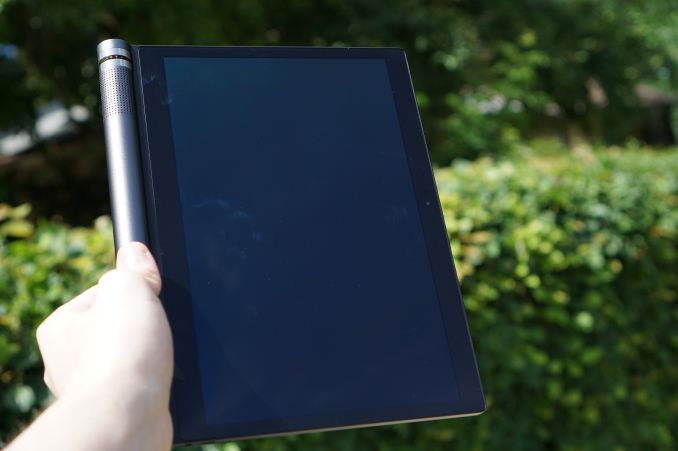 In the end I'm not as impressed by the Venue 10's design and construction as I was with the Venue 8. The move away from aluminum is strange when the Venue 10 is a more expensive device, and the barrel on the end makes it feel much thicker than the 6.2mm thickness of the chassis. I don't really subscribe to the idea that the barrel improves my ability to hold the tablet either, and if anything the high and imbalanced mass of the device actually makes it straining to hold it for long periods of time. It's a much larger hinderance than the asymmetrical bezels of the Venue 8, and I don't think that tradeoff in ergonomics is worth it just to have a nicer attachment to your keyboard dock.