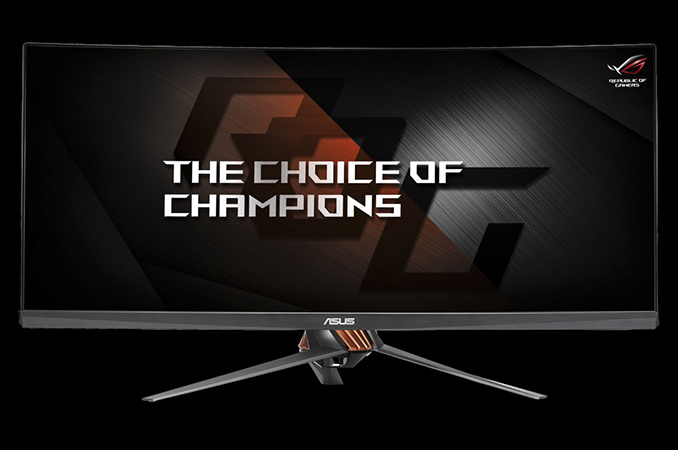 ASUS this week began to ship its first gaming curved ultra-wide display, the ROG Swift PG348Q, which the company introduced back in September and showcased at CES. The monitor, which is the largest ROG display ever, is designed primarily for gamers, features up to 100 Hz refresh rate as well as Nvidia’s G-Sync technology.

The ASUS ROG Swift PG348Q display is based on an IPS panel with 3440×1440 resolution, 1000:1 contrast ratio and 300 cd/m2 brightness. The ultra-wide 34” monitor features 21:9 aspect ratio and 3800R screen curvature, which is larger than a number of 3000R panels that are currently on the market. The monitor can reproduce 1.07 billion colors and covers 100% of sRGB color space, which is not a bad result for a gaming solution. The ROG Swift PG348Q has default refresh rate of 60 Hz and everything between that and 100 Hz should be activated using a special turbo button. ASUS claims that G-Sync variable refresh-rate technology on this display actually works at up to 100 Hz, but to ensure high framerate (as well as refresh rate), a graphics card with sufficient processing performance (e.g., GeForce GTX 980 Ti and higher) is required with demanding titles.

The ROG Swift PG348Q is equipped with one DisplayPort 1.2 and one HDMI 1.4 inputs. The latter only supports 3440×1440 resolution with 50 Hz refresh rate, according to ASUS; for everything between 50 Hz and 100 Hz the DP input must be used. The display also features a 4-port USB 3.0 hub and two 2 W speakers. 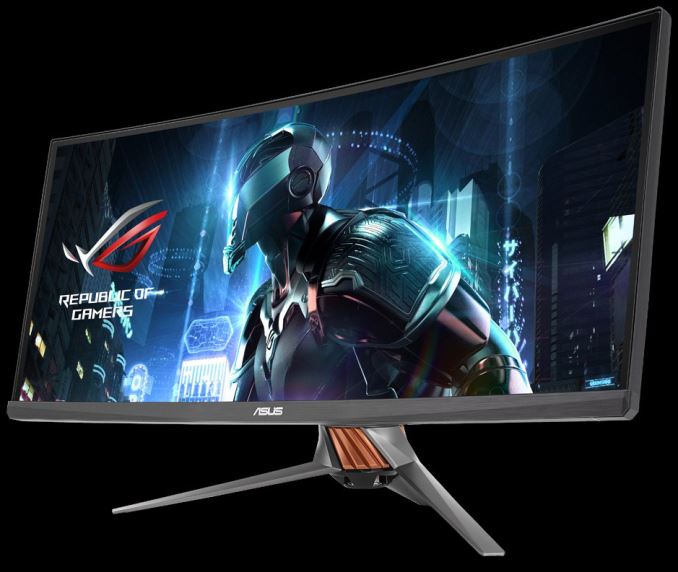 The ROG Swift PG348Q will be ASUS’s largest display ever. It will also be the company’s flagship monitor for gamers for a while. Since the company does not offer non-curved gaming displays larger than 28”, one might expect to expect ASUS to introduce one or two non-gaming models in the future. 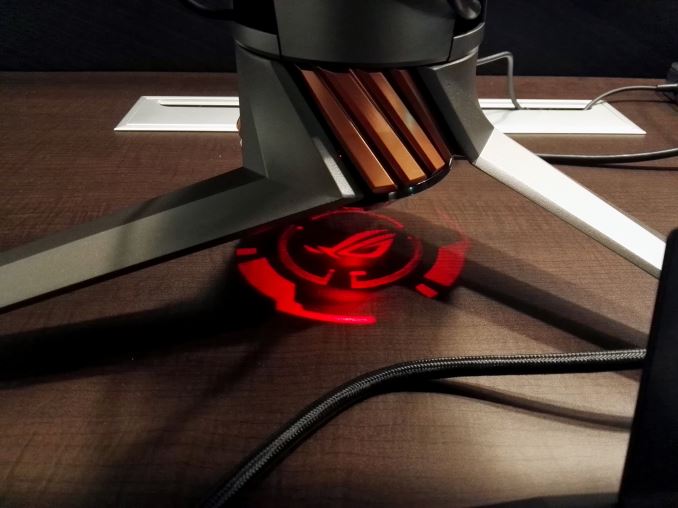 The new display uses the new ASUS ROG color scheme — plasma copper inlays on armor titanium casing as well as an LED effect on the bottom. The monitor also has an ultra-thin frame (which ASUS calls frameless design) as well as tilt, swivel, and height adjustments. Eventually, other ROG-branded displays will inherit similar design and color scheme.

ASUS did not reveal the official MSRP of its ROG Swift PG348Q display and at time to press, and the product should be available at major U.S. retail stores from May. Given the fact that the monitor is a pretty unique combination consisting of a curved IPS panel, high resolution, G-Sync technology and up to 100 Hz refresh rate, this product will be in the upper echelons of monitor pricing. TechReport caught the fact that this panel is being offered by iBuyPower as an add-on option to a prebuilt system for $1200, so we would expect the full retail price to be in that $900-$1200 region. Anyone still want VR?