As important as the Vega hardware itself is, for AMD the target market for the hardware is equally important if not more. Vega’s the first new high-end GPU from the company in two years, and it comes at a time when GPU sales are booming.

Advances in machine learning have made GPUs the hottest computational peripheral since the x87 floating point co-processor, and unfortunately for AMD, they’ve largely missed the boat on this. Competitor NVIDIA has vastly grown their datacenter business over just the last year on the back of machine learning, thanks in large part to the task-optimized capabilities of the Pascal architecture. And most importantly of all, these machine learning accelerators have been highly profitable, fetching high margins even when the cards are readily available.

For AMD then, Vega is their chance to finally break into the machine learning market in a big way. The GPU isn’t just a high-end competitor, but it offers high performance FP16 and INT8 modes that earlier AMD GPU architectures lacked, and those modes are in turn immensely beneficial to machine learning performance. As a result, for the Vega Frontier Edition launch, AMD is taking a page from the NVIDIA playbook: rather than starting off the Vega generation with consumer cards, they’re going to launch with professional cards for the workstation market. 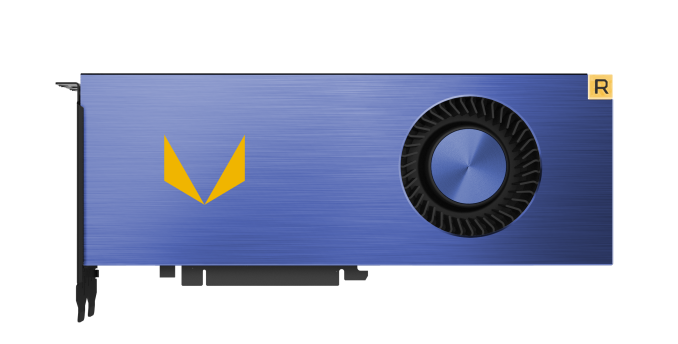 To be sure, the Radeon Vega Frontier Edition is not officially branded as a Pro or WX series card. But in terms of AMD’s target market, it’s unambiguously a professional card. The product page is hosted on the pro graphics section of AMD’s website, the marketing material is all about professional uses, and AMD even goes so far as to tell gamers to hold off for cheaper gaming cards later on in their official blog post. Consequently the Vega FE is about the closest analogue AMD has to NVIDIA’s Titan series cards, which although are gaming capable, in the last generation they have become almost exclusively professional focused.

AMD launching a new GPU architecture in the professional space first is a very big deal. Simply put, the company has never done it before. Fiji, Hawaii, Tahiti, Cayman, Cypress, and more all launched in consumer cards first. The traditional wisdom here is that launching in the consumer space first allows consumers to get their hands on the cards now, while professional products undergo further validation and refinement to meet the higher standards of professional users. Put another way, consumers serve as the final layer of debugging a new GPU, offering mass testing unlike anything else. So for AMD to launch in the pro market first indicates that they have an extensive amount of faith in the product.

As for why AMD would want to do this, the following AMD slide says it all. 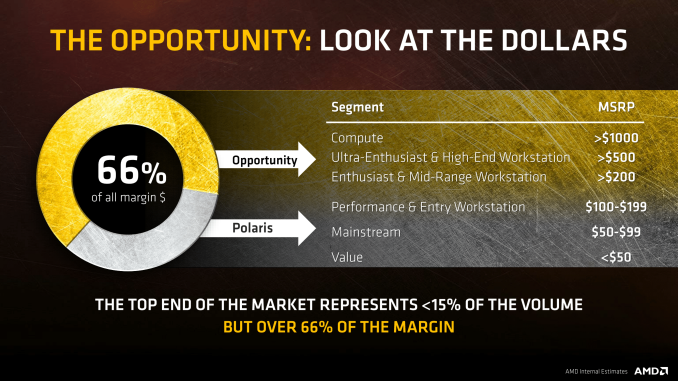 Simply put, professional cards sell for higher prices than consumer gaming cards, sometimes significantly higher. As a result it makes all the sense in the world to sell their first Vega cards to professional users who are willing to pay $1000+ for a compute card, as opposed to consumers who would like to pay half that. More than anything else, AMD’s overall lack of profitability has come from a lack of high-margin parts to help offset their ongoing operational costs, and launching Vega as a pro card is one of the steps AMD is taking to correct that.

For pro users then with sufficiently deep pockets, they’ll be the first to get a crack at AMD’s latest high-end video card/accelerator. AMD calls this line of cards the Frontier Edition, and while the name is clearly AMD being cheeky towards NVIDIA’s Founder’s Edition line, the analogy isn’t completely off-base.  AMD’s target market is going to be machine learning developers, game developers, and others who AMD believes need early access to the cards for future development. The advantage of this route is that, particularly in the case of machine learning, this allows developers to get a jump on testing a new architecture ahead of placing a large order for server cards. So in a sense, one of the roles of the Vega FE is to prime the pump for selling Radeon Instinct MI25 cards later in the year. 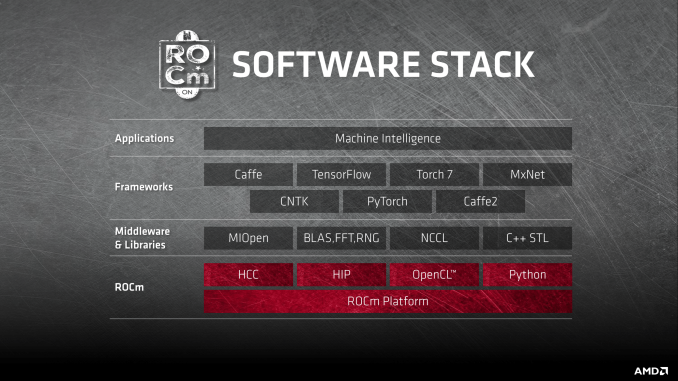 As for consumers, while this is as big a change for them as it is for AMD, it’s likely a hallmark of what to expect in the future for new high-end GPU launches. For AMD gamers who have been holding out for Vega, it’s clear that they’ll have to hold out a bit longer. AMD is developing traditional consumer gaming cards as well, but by asking gamers to hold off a little while longer when the Vega FE already isn’t launching until late June, AMD is signaling that we shouldn’t be expecting consumer cards until the second half of the year.

Wrapping things up, it’ll be very interesting to see how this strategy goes for AMD. NVIDIA has been very successful in the machine learning market over the last year, and if AMD can replicate NVIDIA’s success, not only will they make the machine learning market far more competitive for everyone, but they also stand a very good chance of finally turning the corner on both profitability and their overall share of the HPC market.