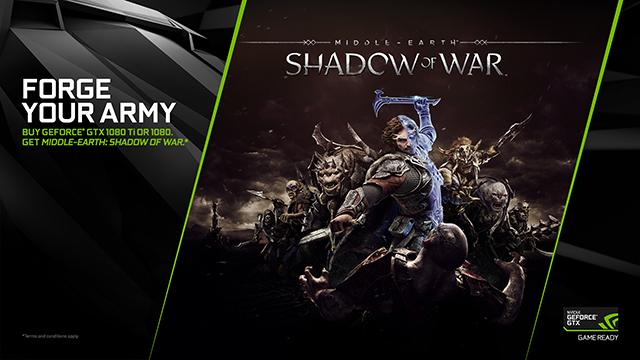 From today until October 16th (or while supplies last), NVIDIA is offering a Middle-Earth: Shadow of War bundle for GeForce GTX 1080 and 1080 Ti graphics cards, systems, and laptops. Branded as “Forge Your Army,” the bundle comes with a free Steam copy of Shadow of War that must be initially redeemed through GeForce Experience.

The much-anticipated sequel to Shadow of Mordor launches on October 10th. Its predecessor was known for punishingly intensive graphics, particularly with respect to VRAM consumption, and found itself in several of our benchmark suites. On that note, Shadow of War will come with an Ultra High Definition texture pack, much like Shadow of Mordor did.

Last month at GamesCom, NVIDIA and Shadow of War developer Monolith Productions also disclosed that Shadow of War will support Ansel at launch, and are working on HDR and SLI support as well. 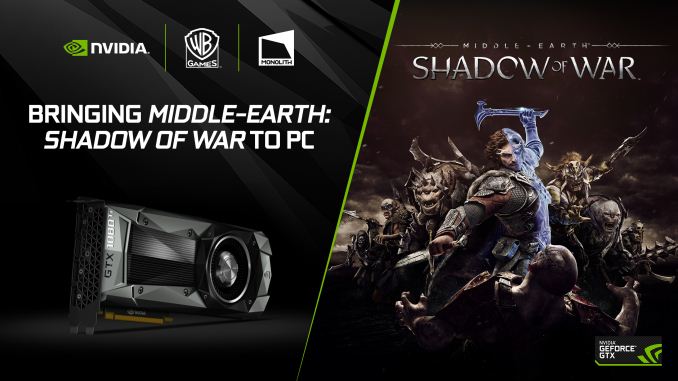 The previous bundle (Destiny 2 for 1080 and 1080 Ti) ended September 5th, and so this is the only active NVIDIA promotional bundle. More details can be found at the main bundle page.

Codes must be redeemed through GeForce Experience (3.2.2 or higher), utilizing driver 373.06 or higher, on a desktop or notebook PC with the qualifying graphics card installed. Additional information about code redemption can be found on NVIDIA’s FAQ site. Be sure to verify the participation of any vendors purchased from as NVIDIA will not give codes for purchases made from non-participating sellers.