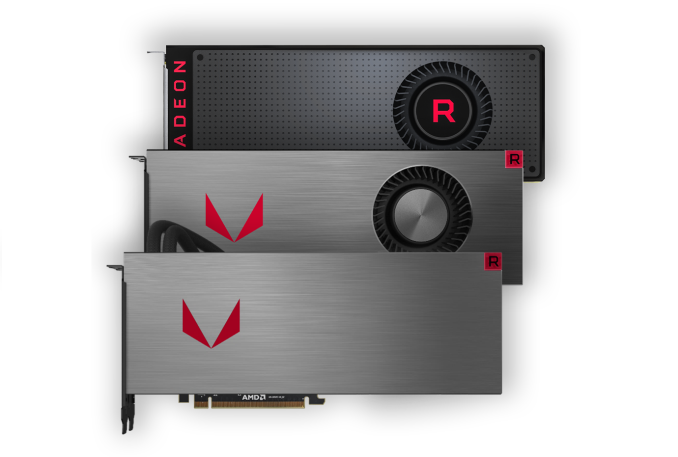 Overall, the research firm is reporting a 4.6% decrease in graphics add-in board (AIB) shipments from last quarter. According to JPR, this is in line with their seasonal ten-year Q3-to-Q4 average of -4.4%; and yet despite this, Q4 was hardly a normal quarter in the industry. As many long-time readers are already well aware, Q4 is when GPU cyrptocurrency mining came back with a vengeance, and indeed without mincing words, the report attributed Q4 2017’s figures to a combination of cryptocurrency mining demand inflating average selling prices, as well as seasonality.

Interestingly it's arguably the latter point that's the more salient. While cryptocurrency prices have affected prices, the long ramp-up/ramp-down cycle for beginning-to-end video card production means that the industry can't radically alter volumes inside a single quarter. In other words, GPU manufacturers and their partners have to plan for the quarter in advance, and a typical Q4 plan would involve tapering back on production a bit to match the traditional seasonal demand.

In total, JPR estimates that over three million graphics cards were sold to cryptocurrency miners, adding up to $776 million in sales. Of these sales, AMD benefitted the most - as one might expect from their early performance advantage in cryptocurrency mining performance. As a result, AMD’s discrete desktop graphics market share is up 6.5 percentage points from Q3 2017, increasing to 33.7%, while NVIDIA’s stands at 66.3%. 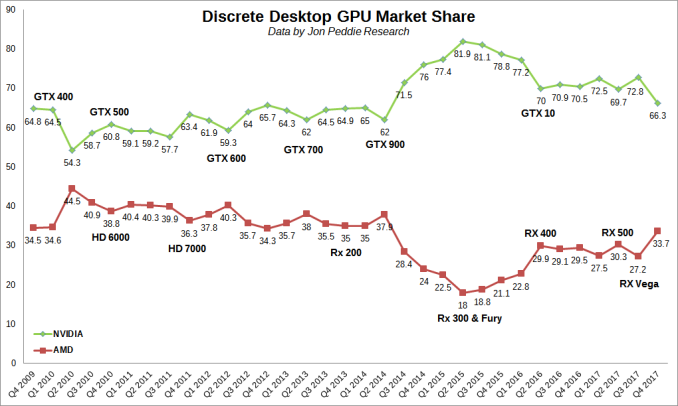 In the public report, it was not specified how much of the market share change was attributable to disproportionate mining sales. Nevertheless, this brings AMD’s share to the highest it has been since Q2 2014. Including all desktop and notebook GPUs, market share remains fairly similar to last quarter, with AMD picking up 1.2%, Intel down 0.4%, and NVIDIA down 0.9%. AMD’s overall GPU shipments were up 8.08% from last quarter, while Intel’s total shipments were down 1.98% and NVIDIA’s down 6%.

JPR did note that the high-end ($250+) and mid-range ($150 – 249) segments continue to expand, while the lower-end mainstream ($90 – 149) stagnates. Though not part of the report itself, this trend is consistent with higher-end cards being favored for mining due to better performance per watt and per dollar. At the same time there's some natural pressure as well: as integrated graphics capabilities improve, this trend is likely to persist. Just last month AMD released their new generation of APUs, with graphics performance of the Ryzen 5 2400G on par with the entry-level discrete graphics. 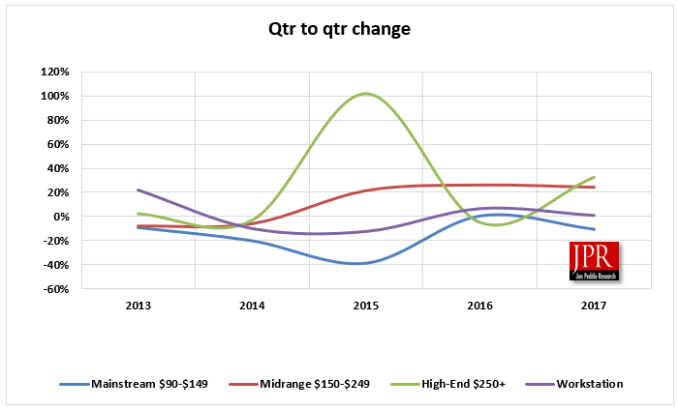 As far as cryptomining demand goes, JPR expects the tapering off to continue, and otherwise remain volatile, an outlook similar to those of both NVIDIA and AMD. However, JPR warns that “[inflated AIB] prices will not drop in the near future.” The decline has not been straightforward, and NVIDIA stated for their recent quarterly report that cryptomining contributed more to revenue than last quarter on a percentage basis; in context, NVIDIA had accounted cryptomining board sales to total to around $70 million for fiscal Q3 2018 and $150 million for fiscal Q2. Compounding matters is the ongoing GDDR5/HBM2 memory shortage, which is further bottlenecking video card production.

In their respective quarterly financial calls, both GPU vendors reiterated their focus on consumer gaming over cryptocurrency mining. Though ultimately neither vendor has the ability to completely restrict sales to a single group due to the nature of the open market.