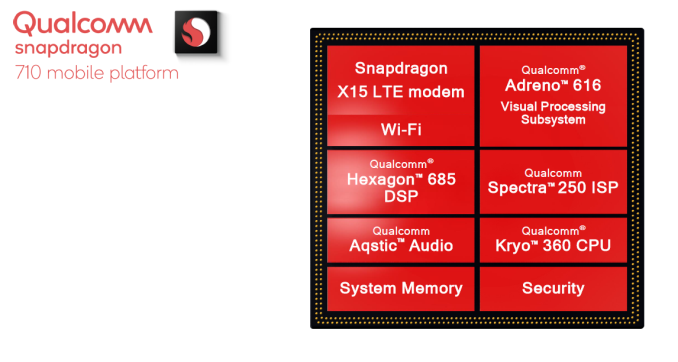 While we haven’t seen that many design wins with the Snapdragon 650/660’s, they are increasingly becoming popular among Chinese vendors for example. The Snapdragon 710 fixes this branding issue of having quite capable SoCs with large CPU cores grouped together as the 700 series, while the lower tiered SoCs such as the Snapdragon 625 or 635 remain in the 600 series .

The big IP blocks found on the Snapdragon 710 are very much derivatives of what’s found on the flagship Snapdragon 845. On the CPU side we see the same 2.2GHz maximum clock on the big cores, but the Kryo 360 Cortex-A75 based CPUs are microarchitectural upgrade over last year’s A73 based Kryo 260. The little cores are also based on the newer Cortex-A55’s and are clocked at up to 1.7GHz. The performance improvements are quoted as an overall 20% uplift in SPECint2000 and 25% faster performance in Octane and Kraken versus the SD660.

The SoC now also uses the new system cache first introduced in the Snapdragon 845 – although I’m expecting a smaller, yet unconfirmed 1MB size in the SD710. 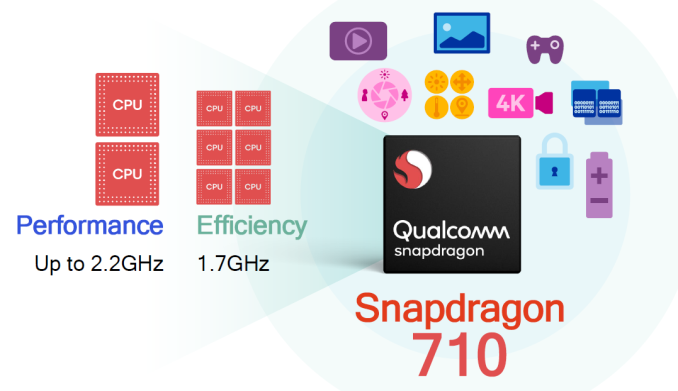 GPU-wise, this is also Qualcomm’s first mid-range SoC sporting the new 600 series Adreno. As usual we don’t have too much information about the Adreno 616 other than an expected frequency of around 750MHz. The performance benefits on the GPU are quoted at up to 35% higher performance versus the Adreno 512 in the SD660.

In terms of connectivity the new SoC implements an X15 modem which is capable of UE Category 15 in the downstream with up to 800Mbps in 3x carrier aggregation and up to UE Category 7 in the upload with up to 2x CA. The new chipset now also offers 2x2 802.11ac digital backend for WiFi – however it’ll still need an external discrete analog RF frontend. 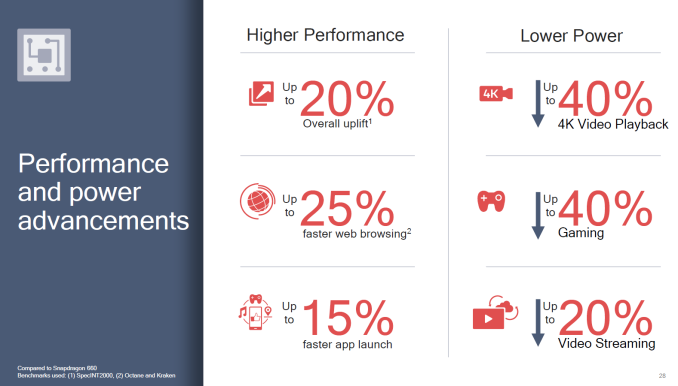 Where the Snapdragon 710 is claimed to shine though is power efficiency. The chipset is manufactured on the Samsung's leading edge 10nm LPP node – same as the Snapdragon 845. The fact that Qualcomm is targeting a leading edge node might be a sign of the where 700-series is headed and what it’s aiming for.

It’s not only on the CPU and on the manufacturing node where the 710 borrows features from the 845- the Hexagon DSP is of the same generation and the Spectra 250 ISP also inherits most of the new features found in the flagship SoC which should greatly improve image processing for mid-range devices. The camera and display pipelines are fully 10-bit capable so it can handle HDR capture and display.

Overall the Snapdragon 710 really does seem like a toned down 845 variant which actually balances out some important aspects. It’s especially good to see the mid-range being pushed into the 10nm manufacturing node as that will give a generation power efficiency jump for the relevant devices.

The Snapdragon 710 platform is available today and Qualcomm expects consumer devices to be launched in this second quarter – meaning we’ll likely to see some vendor announcements around Computex.