The Snapdragon 855 Performance Preview: Setting the Stage for Flagship Android 2019 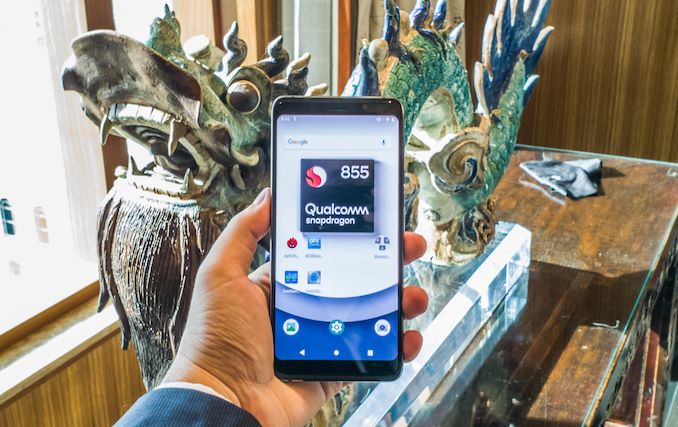 As we get ever closer to the releases of various Android vendor’s newest generation devices, Qualcomm continues its tradition of showcasing the performance of its newest generation SoC ahead of time, giving us a preview and a glimpse of what to expect of the upcoming commercial devices. This year, the company has shuffled the schedule around a bit, and instead of hosting the event at their San Diego headquarters, and we were able to get a hands-on with the Snapdragon 855 at CES before the show had started. Today we’re be looking in quite extensive detail on how exactly the new Snapdragon chipset performs, as well as shedding some light on some important unanswered technical questions on some aspects of the SoC.

It’s been roughly a little over a month now since Qualcomm officially announced the Snapdragon 855 in Hawaii, and we had posted extensive coverage on the event and the various announcements that took place:

For anyone who might have missed it, if there’s any one specific article that I would recommend reading before heading in directly to the results of the benchmarking session, then it’s our in-depth piece summarising the disclosed specifications of the new Snapdragon 855.

Summarising the Snapdragon 855 quickly, at the heart of the new 7nm chipset we find four new Kryo 485 CPUs based on Arm’s new Cortex A76 cores. The new CPU cores are derivatives of the designs Arm makes available by default: Here Qualcomm takes advantage of the “Built on Arm Cortex Technology” license which allows vendors to demand changes to the IP based on a set of microarchitectural tuneables that Arm makes available. Even though the Snapdragon 855’s Kryo 485 is the third generation of such a derivative core from Qualcomm, it represents the first instance of the company actually talking about what kind of microarchitectural changes have been made to the CPUs.  The Kryo 485 Cortex A76 derivatives increase the re-order buffer from Arm’s default 128 entries to a higher, undisclosed figure. Qualcomm has also revealed that the prefetchers have been optimised for better efficiency, although again we don’t have any details on how exactly this has been achieved. Finally, as I’ve understood it, the branch data structures have also seen an improvement over the default A76 configuration. 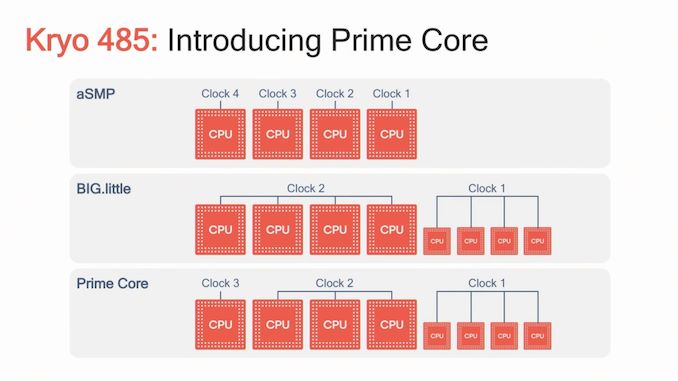 Although the SoC still comes in a “4+4” big.LITTLE high-level core configuration, the big cores in the S855 aren’t actually all equal: Here Qualcomm has gone for a rather exotic 1+3+4 configuration, in which one of the big cores is implemented with a higher frequency physical design reaching 2857MHz, all while also employing a larger L2 cache of 512KB. The remaining three big cores max out at 2439MHz and are only equipped with 256KB L2 caches. Qualcomm does clock this 1+3 configuration differently with asynchronous clock planes, however the cores still share the same voltage plane. Here the company explains that this is a compromise between power efficiency benefits, and cost of implementation complexity as well as supporting power delivery components (Adding an extra voltage plane adds another PMIC rail with inductors & capacitors). 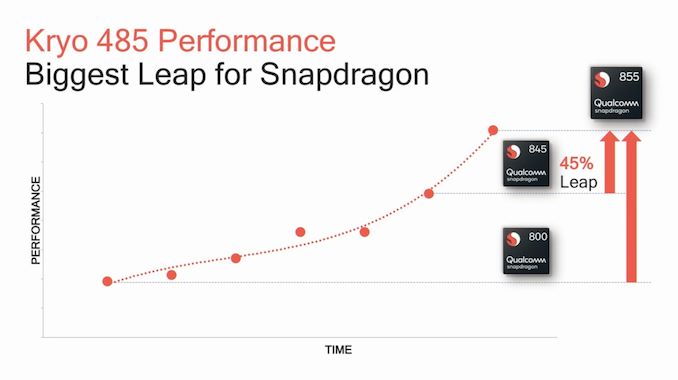 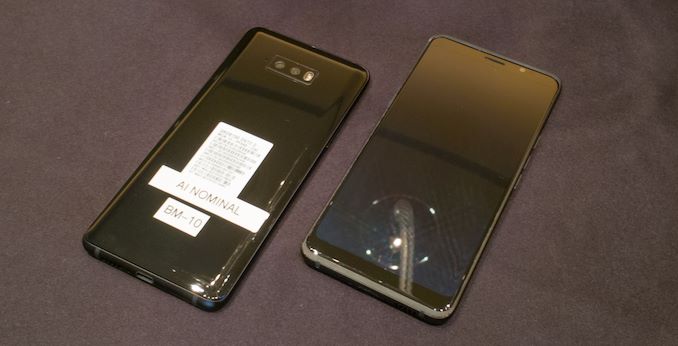 Today’s testing platform is Qualcomm’s new Snapdragon 855 QRD (Qualcomm Reference Design). This year’s QRD design is probably Qualcomm’s most “commercial-device-like” ever as other than the more robustly built bezels, you would have a hard time noticing that this a reference platform – at least on the hardware side. The company stated that the QRD as tested should be a near representation of what to expect of commercial device – but of course vendors might still diverge from this as they may change the underlying software.

We’ve had a limited hands-on time with the devices, and although we managed to do a lot with them, some of the more time-intensive testing such as GPU sustained performance testing were out of the scope of today’s session.

The Big Question For The Snapdragon 855 : Memory Latency

One of the more odd developments that Qualcomm introduced with the Snapdragon 845 last year was the addition of a new 3MB system level cache that sits in front of the memory controllers as a new cache hierarchy. This new block is meant to serve as a SoC-wide buffer for the various IP blocks, reducing the amount of expensive DRAM memory accesses and thus improving power efficiency of the system. As well as improving power efficiency, it could in theory also serve as a booster for performance. The most famous use of such a system cache is Apple’s own A-series chips where we’ve seen this kind of IP block used ever since the A7.

Qualcomm’s introduction of such an IP block in the Snapdragon 845 was exciting to see, however this came as a double-edged sword as it had also introduced a 30% regression (In comparison to the Snapdragon 835) in DRAM memory latency, which may have limited some of the performance aspects of the A75-based CPU last year.

The new Snapdragon 855 unfortunately doesn’t seem to have made any major improvements in this regard as Qualcomm had confirmed that the IP block is the same as the one used in the Snapdragon 845. 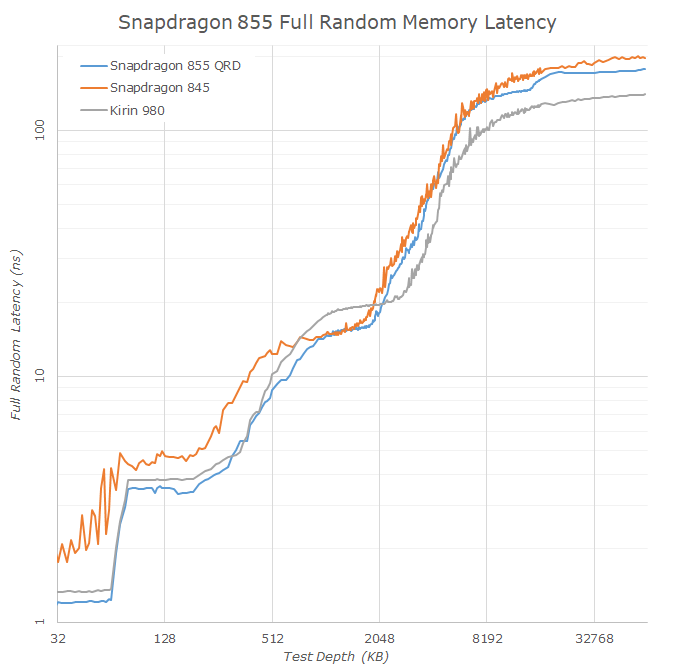 To investigate the differences between the Snapdragon 845, 855 and also the Kirin 980, we make use of latency test. First off, let’s view the memory hierarchy in a logarithmic latency graph, better visualising the various latency jumps between hierarchies:

Between the Snapdragon 845 and the new 855, we now see the increased L2 cache of the Kryo 485 Prime core at 512KB, an increase over the 256KB size on the previous generation performance core. What is also visible is that the L2 latency has improved, even though both chipsets are clocked near to each other at ~2.8GHz.

The DSU L3 cache on both the Snapdragon 845 and 855 are identical at 2MB in size: Again what’s interesting here to see is that the latency on this part of the cache hierarchy seems to be identical between both SoCs. This is in contrast to the 4MB L3 of the Kirin 980 which, albeit bigger, seems to be 20% slower. 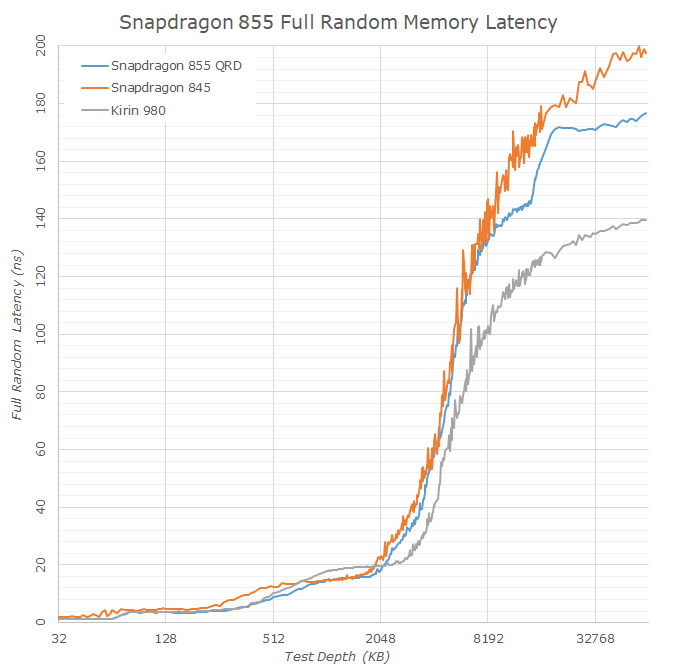 Moving onto the linear graph, here we can see the difference in DRAM latency in a clearer fashion. The Snapdragon 855 does seem to slightly improve memory latency over the 845, however this might just be an effect of the newer 2133MHz LPDDR4X memory that represents a 14% speed boost over the 1866MHz memory of last year’s devices.

Critically though, is the comparison to the Kirin 980 which employs the same CPU microarchitecture, and the same 2133MHz memory as the Snapdragon 855. Here Qualcomm still shows a notable latency regression in memory latency over the competition, whose effects will be interesting to analyse in the following pages.