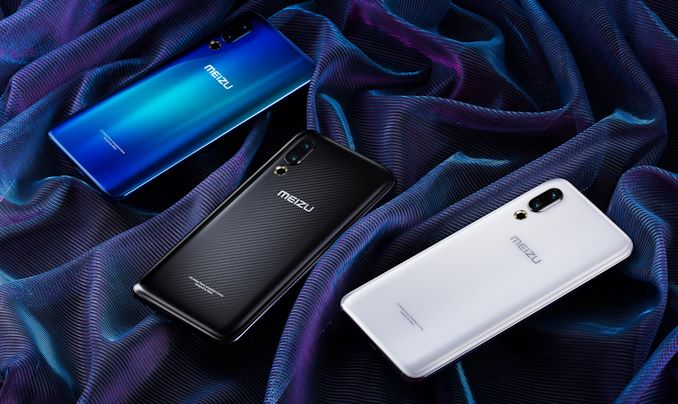 Meizu is one of the Chinese vendors that we had covered early on over the last few years. One of the early issues with the company’s flagships is that they most often lacked the proper frequency bands for western networks, particularly the lack of B20 for European carriers, even though the company's mid- and low-range products are very much prevalent in some European markets such as France. The company last year looked to  address this issue, in coincidence with the switch from Samsung’s Exynos SoCs to Qualcomm’s newest Snapdragons, and introduced the Meizu 16 and 16th with the Snapdragon 710 and Snapdragon 845 with dedicated overseas models.

Today’s announcement is about the new Meizu 16s – a full hardware refresh of last year’s models including the brand-new Snapdragon 855 and a new camera sensor, as well as an internal redesign to accommodate a notably bigger battery.

Powered by the new Snapdragon 855 SoC, the new Meizu 16s allows the company to be among the first to employ the new generation SoC in this year’s products. Qualcomm’s new SoC this year impressed a lot and will certainly be a solid foundation for the 16s.

The phone comes with either 6 or 8GB of LPDDR4X with 128GB or 256GB of storage, however the 8+256GB combination won’t be available outside of China.

Although the new 16s seems like a hardware upgrade to the 16th, it’s also very much a design upgrade, if you look closely enough. Meizu still maintains a 1080 OLED display, however the screen has grown bigger to 6.2”. This increase however didn’t come at a cost of a bigger phone though, as the 16s retains the largely the same form-factor as its predecessor. Instead Meizu was able to further reduce the top and bottom bezels of the design and elongate the screen aspect-ratio.

The screen continues to be AMOLED and the panel is supplied by Samsung. Meizu advertises that it calibrated the screen of the 16s down to an accuracy of 1.5 JNCD and says it’s ahead of the competition in this regard.

Also introduced in the 16 and now upgraded in the 16s, is the new under-screen fingerprint sensor which is said to have doubled its unlocking speed.

A key part of achieving this new design was the new front-camera which is a new 20MP Samsung 3T2 sensor module which is said to be the first of its kind employed in a phone and distinguishes itself by being extremely small, in order to fit into the small top bezel.

Further design changes are obvious when flipping the phone around, here we see that the cameras have shifted over from the middle of the phone to the side. I’m not too big fan of this new setup as it’s quite too common among other vendors, however this is just my subjective opinion.

Among the hardware changes is the main camera sensor: Here Meizu has swapped in the 12MP unit of the 16s in favour of a new 48MP sensor: The new IMX586. The sensor actually isn’t new and we already had the chance to test it out in the Honor View20 review back in January and found it to be an excellent performer. The Meizu 16s however improves on what we saw in the View20 as the phone has a wider f/1.7 aperture lens, as well as includes OIS which is incredibly important for video recording.

The secondary rear camera module is a 20MP IMX350 sensor with a f/2.6 aperture and a 3x optical zoom for telephoto shots as well as bokeh mode shots.

What the new shifted camera design does allow for, is a rearrangement of the internal motherboard layout to accommodate a much bigger battery: The 16s increases the battery capacity from 3010mAh to 3600mAh, again without changing the dimensions of the phone. One thing that had to give however was the weight, which increases from 152g to 165g.

An interesting aspect of the motherboard redesign is that Meizu discloses that it uses a “POP” or PCB on PCB design, meaning it uses the same “sandwitched” PCB designs as Apple’s iPhone X/XS and the new Huawei P30 Pro. What is surprising here is just the fact that Meizu was able to introduce this technology in a phone in the price-range of the 16s – something I had thought we wouldn’t see for several years to come.

It’s to be noted that in the design change, Meizu dropped the 3.5mm headphone jack. This is very odd as Meizu has a long history of delivering quality audio solutions. While seemingly Meizu couldn’t resist the urge to drop the headphone jack, the company did however make efforts for providing a good alternative in the form of the new 3.5mm headphone dongle: The new unit employs a new Cirrus Logic CS43131 32bit/384KHz DAC which promises to have outstanding SNR and THD values, something almost all other Android vendors have failed to provide in existing 3.5mm dongles.

The Meizu 16s orders start on April 28th in China with the 6+128GB variant coming in at ¥3198 (415€+VAT), the 8GB+128GB at ¥3498 (454€+VAT) and finally the 8+256GB being China-exclusive at ¥3998. As a reminder, the Chinese versions of the phone lack the proper European LTE bands and it’s recommended to wait for availability for the overseas variant which comes with the relevant Google Play services and correct frequency band support.