The GN-BR404W comes packaged with the router itself, AC power adapter, user guide, a cross-over and straight-through CAT5 Ethernet cable, and cradle that doubles as a wall mount.

The design of the BR404W is simple and for the most part, user friendly. Yellow LEDs correspond to each of the four LAN ports, WAN, wireless WAN, and power. It would have been nice if there were different colored LEDs to correspond to connection speeds and the yellow LEDs be a little brighter. There is no power button to power cycle the router to prevent accidental power cycling of the router. A pin hole button is available to set the router to factory defaults.

One downside to standing up the router is the layout of the Ethernet ports. We had the router tip over on several occasions when the LAN ports were connected. The design of the router differs from some of the other VPN routers in that there is no antenna. This seems especially odd since the GN-BR404W and GN-B49G have exactly the same physical housing. Looking at the picture below, you can even see the circular molding where the antenna would go. 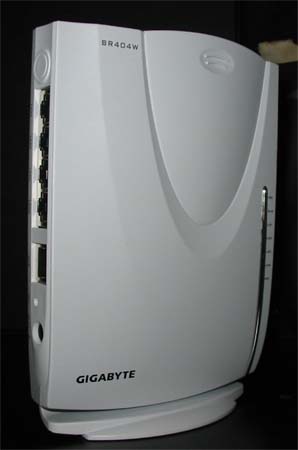 
However, looking at the router carefully reveals a tab that one can slide off. After doing this, we see why there was no antenna in the router. The router uses Gigabyte's own GN-WMAG wireless LAN card for its wireless communications. 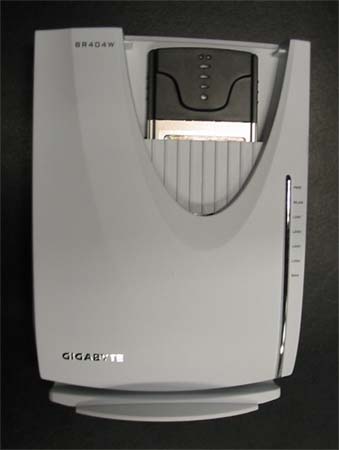 
Here is a closer look at the wireless card itself. 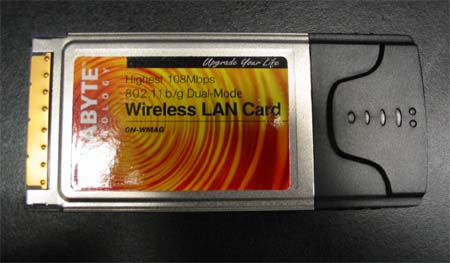