Device gaming performance, or better said, SoC GPU performance, is dictated by a trifecta of characteristics: First of all, the actual GPU microarchitecture and how performant and efficient it is, in this case the Adreno 640 of the Snapdragon 855 should fare very well. Secondly, the device vendor needs to employ a good physical design of the phone, able to dissipate heat away from the SoC to the body of the phone, enabling the GPU to operate at higher frequencies without throttling. Lastly, it’s a question of how the vendor actually tunes the software and the throttling levels of the phone, choosing target limit skin or silicon temperatures.

As a prelude to the test results, I’ll outright say that the Oppo Reno 10x behaves near identical to the OnePlus 7 Pro which we tested earlier this summer, meaning it has nearly no thermal throttling at all on the GPU.

Whilst the OnePlus 7 Pro was able to maintain peak performance metrics for long durations, at a cost of quite high device body temperatures, the Oppo’s long-term performance came with the gigantic caveat that it hit device thermal limits and shut down the tests.

I’ve become increasingly wary of this behaviour as I’ve encountered it in the past with several devices, Huawei in the past ended up in this situation by disabling their thermal throttling mechanisms when detecting benchmark applications, essentially cheating the behaviour and score. I’ve also encountered it early on last year on the Galaxy S9+, although Samsung claimed this was a bug and the behaviour disappeared with subsequent firmware updates.

The problem for me is that I can’t accurately determine if this is just a lack of oversight and software optimisations on the part of Oppo, or rather something that’s more malicious. I’m using benchmark suites with altered application IDs in order to avoid the more common benchmark detection by vendors, but that’s not to say they haven’t found more sophisticated ways to detect the tests.

Whatever the reason might be, the scores for the Reno 10x come with a big asterisk – being that they might not accurately depict the real performance of the device, and if they indeed are valid, then the device might simply shut down the app on you at some point if you overstress it too much or are in a very hot environment. 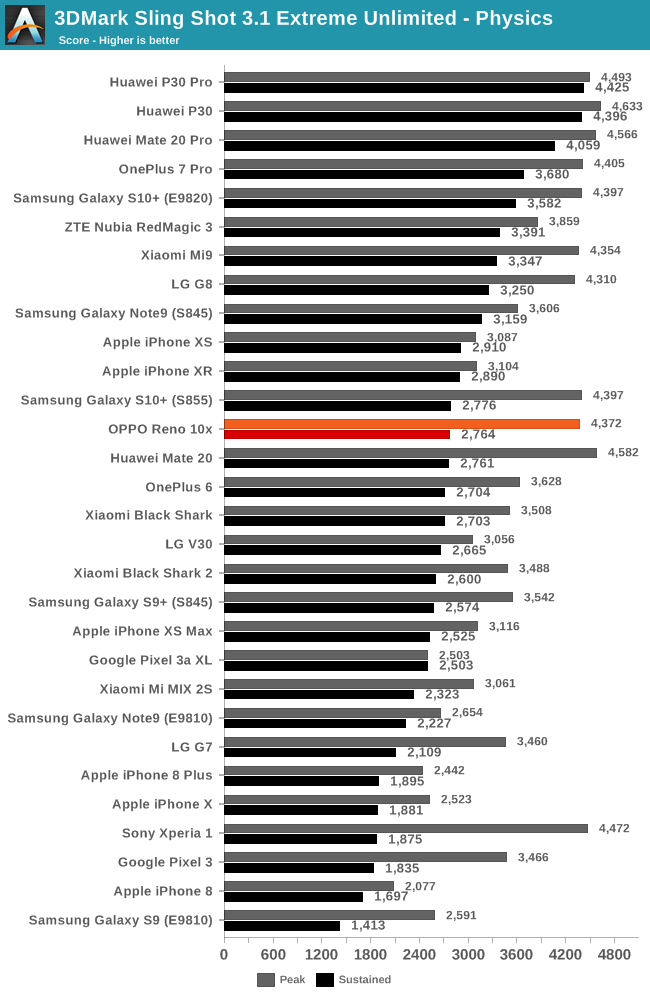 The one test where we don’t see any issues is in the 3DMark Physics test, here the phone and CPU do actually throttle correctly. The Reno 10x’s result isn’t too fantastic here in terms of performance compared to other devices, but we have to keep in mind that the device allowed itself to reach much higher temperatures than other phones, and that might be the reason as to why the CPU is throttling more. 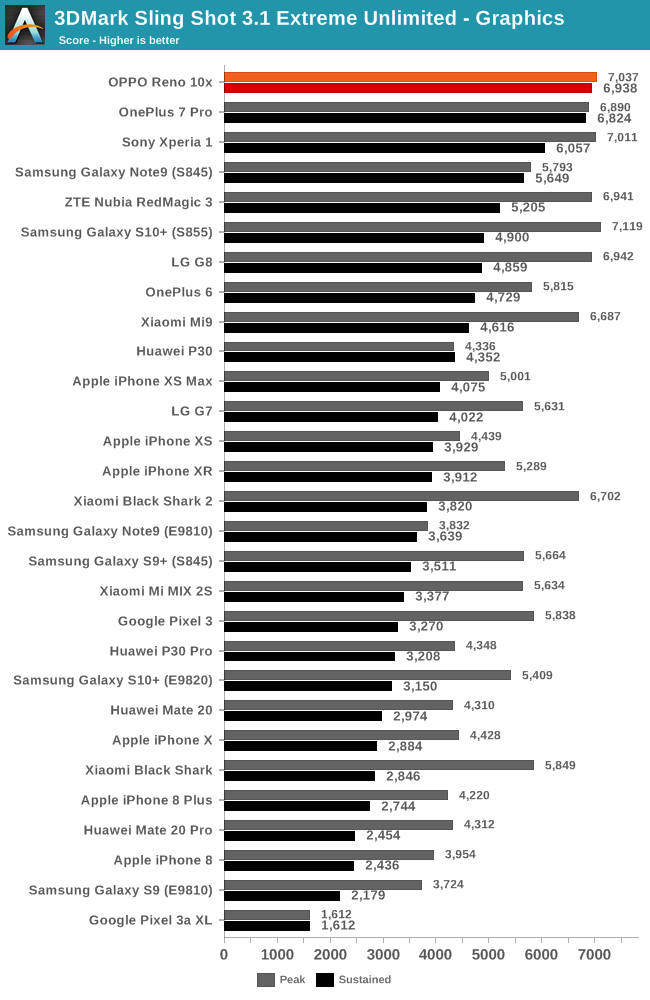 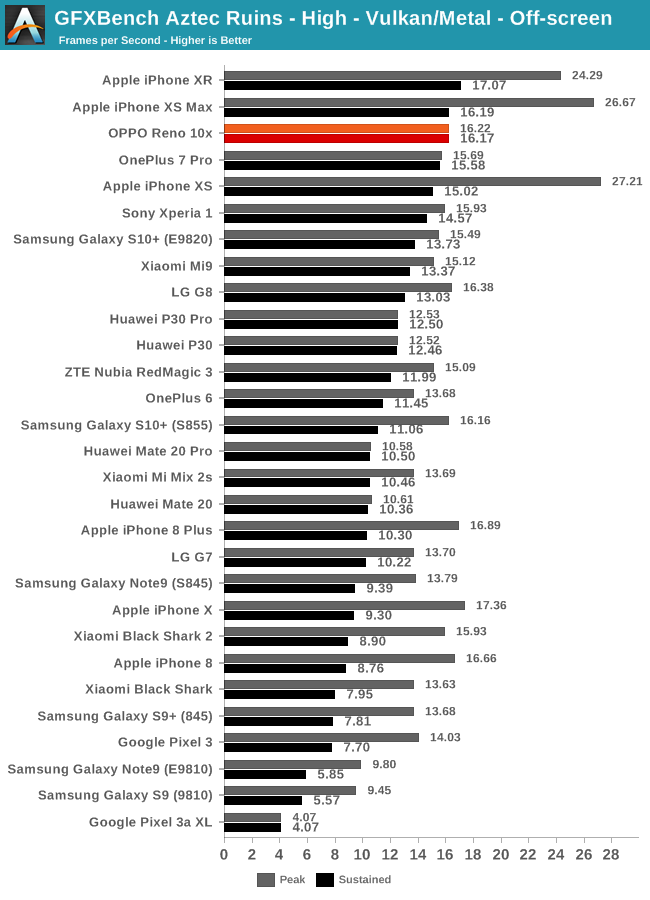 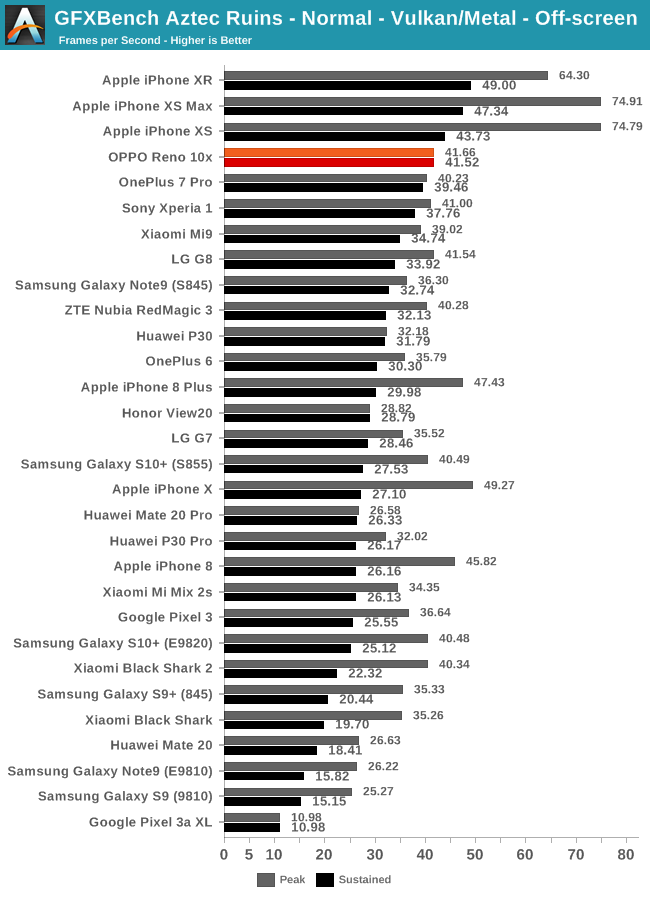 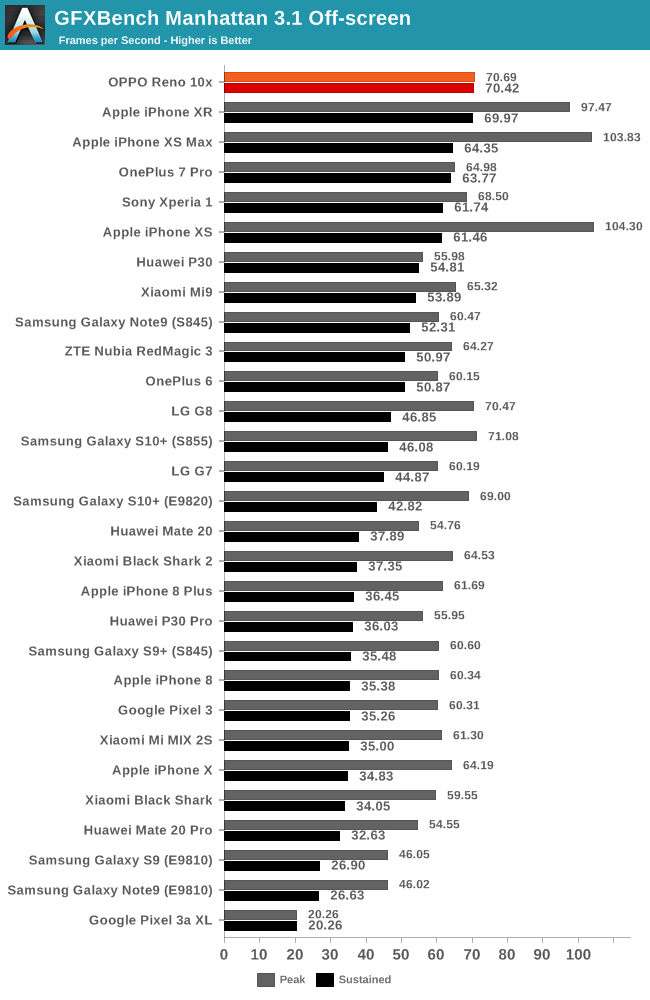 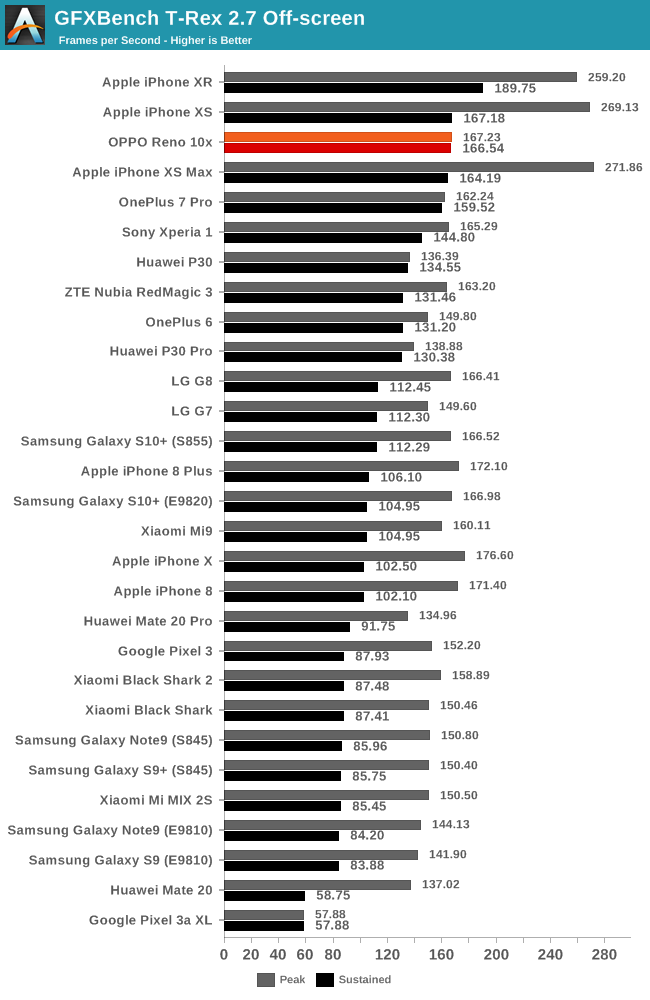 In the GPU-centric workloads, we see that things are quite straightforward for the Reno 10x. It just doesn’t throttle, and the phone is able to maintain the best peak and sustained performances of any other Snapdragon 855 device. Again, this come at a cost of very high device temperatures and the risk that it’ll simply overheat and close your app if you do end up overstressing it in a real scenario.