How to Manage 5.0 GHz Turbo

Intel lists the Core i9-9900KS processor as having a 127W TDP. As we’ve discussed at length [1,2] regarding what TDP means, as well as interviewing Intel Fellows about it, this means that the Core i9-9900KS is rated to require a cooling power of 127W when running at its base frequency, 4.0 GHz. Above this frequency, for example at its turbo frequency of 5.0 GHz, we are likely to see higher than 127W.

Now, I started saying in this review that the length of time that the processor will spend at 5.0 GHz will be motherboard dependent. This is true: Intel does not strictly define how long turbo should be enabled on any processor. It allows the motherboard manufacturer to ‘over-engineer’ the motherboard in order to help push the power behind the turbo higher and enable turbo for longer. The specific values that matter here are called PL2 (Power Limit 2, or peak turbo power limit), and Tau (a time for turbo). 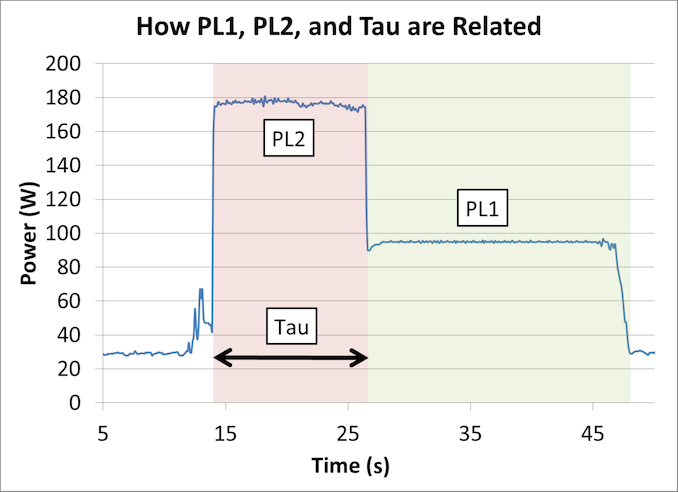 Motherboard manufacturers can set PL1, PL2, and Tau as they wish – they have to engineer the motherboard in order to cope with high numbers, but it means that every motherboard can have different long turbo performance. Intel even suggests testing processors on high-end and low-end motherboards to see the difference. Users can also manually adjust PL1, PL2, and Tau, based on the cooling they are providing.

Despite giving us these numbers for PL1, PL2, and Tau, Intel also stated to us that they recommend that motherboard manufacturers determine the best values based on the hardware capabilities. The values of 127 W, 159 W, and 28 seconds are merely guidelines – most motherboards should be able to go beyond this, and Intel encourages its partners to adjust these values by default as required.

We tested Intel’s guidelines with a 10 minute run of Cinebench R20. 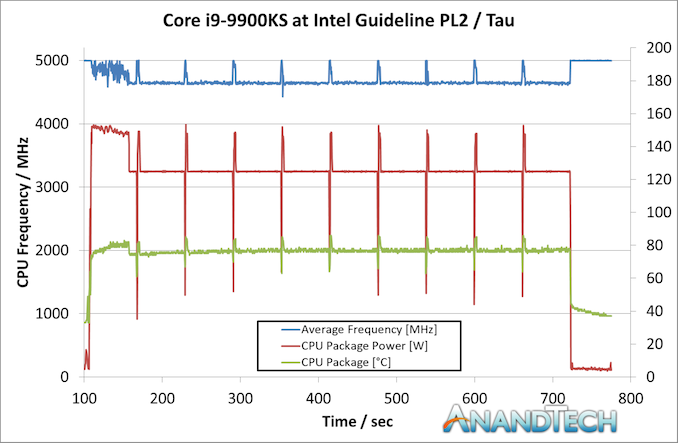 He we can see that at idle, the CPU sits at 5.0 GHz. But immediately when the workload comes on, it has to reduce the average CPU frequency because it goes straight up to the 159W limit – simply put, 159W isn’t enough to hit 5.0 GHz. We see the temperature slowly rise to 92C, but because the power isn’t enough the frequency keeps fluctuating.

By the end of the first Cinebench R20 section, it seems that the majority of it occurred during the turbo period. This means that this run scored almost the same as a pure 5.0 GHz run. However the subsequent runs were not as performant.

Because the turbo budget had been used up, the processor had to sit at 127 W, its PL1 value. At this power, the processor kept bouncing between 4.6 GHz and 4.7 GHz to find the balance. The temperatures in this mode kept stable, nearer 80C, but the performance of Cinebench R20 dropped around 8-10% because the CPU was now limited by its PL1/TDP value, as per Intel’s base configuration recommendation.

Because motherboard manufactuers can do what they want with these values, we set the task on the motherboard we tested, the MSI Z390 Gaming Edge AC. By default, MSI has set the BIOS for the Core i9-9900KS with a simple equation. PL1 = PL2 = 255 W. When PL1 and PL2 are equal to each other, then Tau doesn’t matter. But what this setting does is state that MSI will allow the processor to consume as much power as it needs to up to 255 W. If it can hit 5.0 GHz before this value (hint, it does), then the user can turbo at 5.0 GHz forever. The only way that this processor will reduce in frequency is either at idle or due to thermal issues.

Here’s the same run but done with MSI’s own settings: 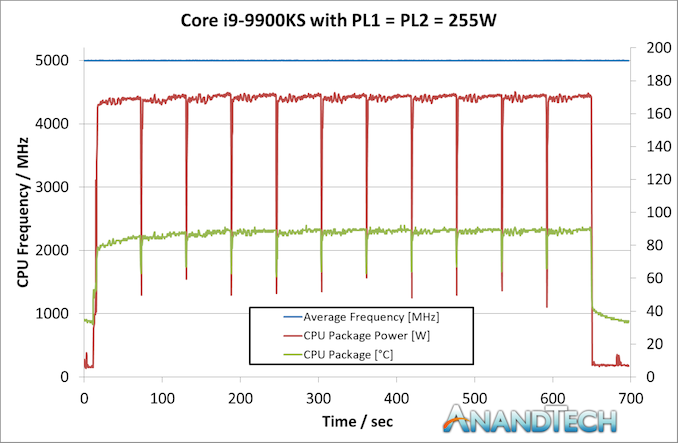 The processor stayed at a constant 5.0 GHz through the whole run. The CPU started pulling around 172W on average during the test, fluctuating a little bit based on exactly which 1s and 0s were going through. The CPU temperature is obviously higher, as we used the same cooling setup as before, and peaked at 92C, but the system was fully table the entire time. 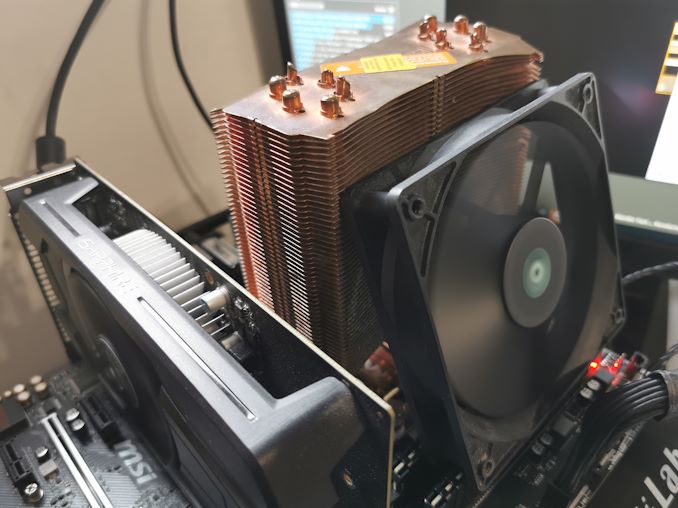 Here was our system setup – a 2kg TRUE Copper air cooler powered by an average fan running at full speed in an open test bed.

But what this means is that users are going to have to be wary of exactly what settings the motherboard manufacturers are using. For those of you reading this review on the day it goes live, you’ll likely see more than a dozen other reviews testing this chip – each one is likely using a different motherboard, and each one might be using different PL2 and Tau values. What you’ve got here are the two extremes: Intel’s recommendation and MSI’s ‘going to the max’. Be prepared for a range of results. Where time has permitted, we’ve tested both extremes.