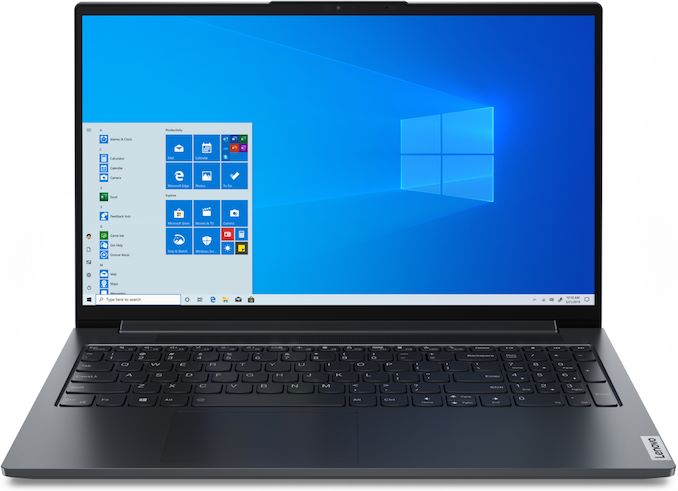 As part of their CES 2020 offerings, Lenovo has introduced its new ultra-slim 15.6-inch-class laptop aimed at a wide range of performance levels. When equipped with entry-level hardware, the multi-purpose Yoga Slim 7 15 notebook can be used for office and other applications that do not need a lot of horsepower, whereas beefier models can be used for gaming, thanks to the inclusion of NVIDIA’s GeForce GTX GPUs.

The Lenovo Yoga Slim 7 15 laptop is equipped with a 15.6-inch Full-HD IPS display and is based on Intel’s 10th Generation Core ‘Ice Lake’ processor. This is paired with 8 GB or 16 GB of LPDDR4X memory as well as a 256GB/512GB/1TB PCIe SSD. All versions of the Yoga Slim 7 15 come with the usual connectivity and multimedia capabilities for higher-end notebooks, including Wi-Fi 6, Bluetooth, Thunderbolt 3, HDMI, a SD card reader, a Windows Hello-compliant webcam, and a 3.5-mm combo audio jack.

Meanwhile, all versions of the Lenovo Yoga Slim 7 15 laptops will come in Slate Grey CNC-machined aluminum chassis. So they will look and feel rather similar (yet not the same!). However, they will be very different under the hood.

Lower-end versions of the laptop will rely on Intel’s integrated graphics, which as we're talking about Ice Lake, is more than enough for productivity and video playback applications, as well as entry-level gaming with the higher-end Iris Plus CPUs. More advanced Yoga Slim 7 15 notebooks step up to NVIDIA’s GeForce MX graphics processor, while the beefiest configurations feature NVIDIA’s GeForce GTX GPUs to offer solid laptop gaming performance.

With all of that said, there are some form factor differences depending on the GPU used. Higher-end discrete GPU requires better cooling, so while the typical Yoga Slim 7 15 SKUs with integrated graphics or a GeForce MX GPU are 15.9 mm thick, the versions of the Slim with a GeForce GTX are 17.9 mm thick. Furthermore, while ‘default’ machines weigh 1.6 kg – 1.7 kg, those with a high-performance GPU weigh 1.8 kg – 1.9 kg, a notable difference in size and weight. 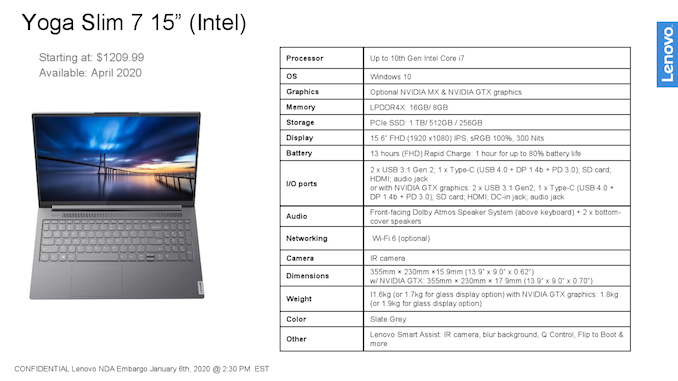