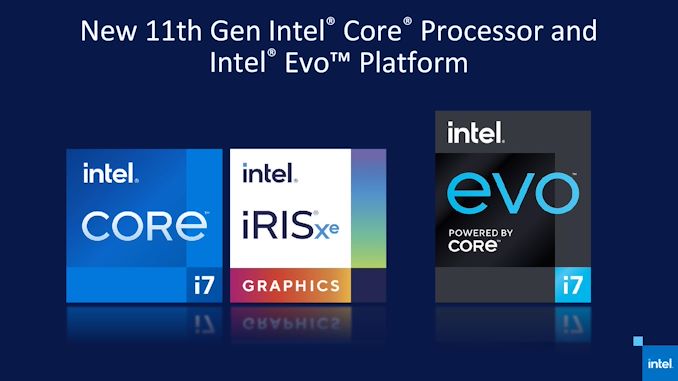 In August, Intel ran one of its rare Architecture Days where the company went into some detail about its upcoming Tiger Lake processor. This included target markets, core counts, graphics counts, a look into some of the new acceleration features, and a promise of a product launch later in the year. That product launch is now here, and Intel is providing Tiger Lake with speeds and feeds, providing detail and expected benchmark performance for Intel’s next generation of notebook-class devices.

What We Already Know

Recapping what we learned at Intel’s Architecture Day 2020, the standard form of Tiger Lake is a quad core processor with an updated graphics architecture built on Intel’s latest manufacturing process.

These new 11th Generation Core processors use four of Intel’s latest cores built with the Willow Cove microarchitecture – a slightly modified version of the Sunny Cove microarchitecture found in Intel’s 10th Generation Ice Lake processors. These new cores offer more performance than before, peaking at 4.8 GHz compared to the 4.0 GHz seen in the previous generation, a 20% improvement. However the underlying clock-for-clock performance improvements are minimal, with Intel instead focusing on that frequency gain. 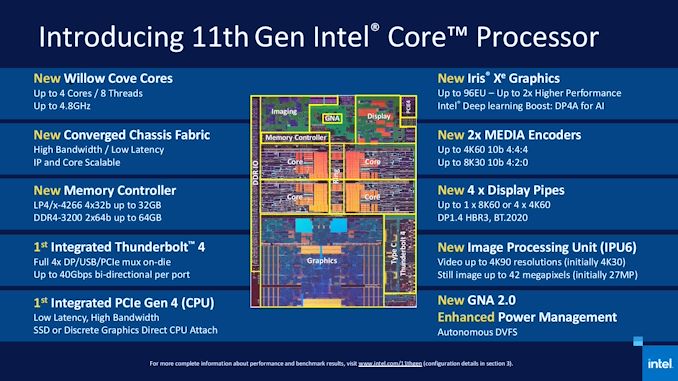 The reason for the frequency gain comes from the manufacturing process – formerly Intel’s 10++ process, renamed once to 10+ and then again during Architecture Day to its new name: Intel’s 10nm SuperFin technology. The goal with this manufacturing process was two-fold: firstly to increase efficiency and scalability to enable higher frequencies, but also to improve yields. As a result, we will see Intel claiming higher frequencies, that lead to higher performance, at similar power levels to the previous generation. These cores support AVX-512, as well as Intel’s DL-Boost acceleration libraries. 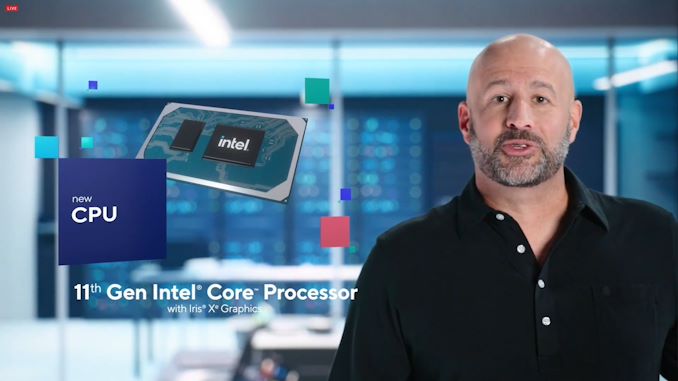 On the graphics side, Tiger Lake uses Intel’s new Xe-LP graphics architecture, which the company also detailed at Architecture Day – we have a separate article explaining the differences. Simply put, Xe-LP increases the raw thread count and compute count per execution unit (EU), as well as the cache hierarchy and some acceleration features. For Ice Lake we saw 64 EUs running at 1100 MHz, whereas for Tiger Lake we will see 96 EUs (+50%) running at 1350 MHz (+22%). Add in some of the other benefits and we should supposedly see a 2x improvement in graphics performance compared to the previous generation on paper. For AI compute, the graphics also supports DP4A instructions for INT8 inference workloads. 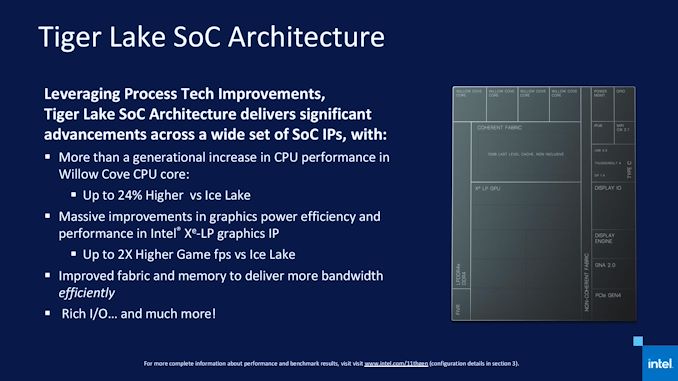 The graphics display pipeline has been improved, with support for AV1 decode, as well as display pipes for up to four 4K60 displays or a single 8K60 display. There is a direct display port to memory to improve latency – memory support on Tiger Lake includes LPDDR4X-4267 (up to 32 GB), DDR4-3200 (up to 64 GB), and when available, we will see LPDDR5-5400 devices in 2021. For accelerators, Intel has also boosted its Gaussian Neural Accelerator to version 2.0, to help with offloading simpler AI inference workloads such as noise cancellation.

Other improvements to Tiger Lake include native Thunderbolt 4 support, with the controller embedded into the CPU allowing for up to four TB4 ports per device. Wi-Fi 6 support is also enabled through a CNVi interface. Intel’s power/frequency algorithms are also updated, allowing for separate scaled power and clocks on the CPU, GPU, and memory fabric. Intel stated that it has doubled the internal fabric bandwidth allowing all these parts to communicate with each other with more data.

The difference between the previous Architecture Day and today’s Tiger Lake launch is that today is more about the end-user performance: the speeds and benchmark numbers that end users are going use to compare it against other products in the market. Not only this, but Intel’s partners are now free to start announcing future Tiger Lake based products.

The details we should start with right away are the processors. Intel has two categories of Tiger Lake parts, ranging from 7 W up to 28 W. Intel this time around is presenting them a little differently. The top 12-25 W processors are technically known as ‘UP3’ processors, or what we used to call the U-series hardware. These processors used to have a nominal TDP of 15 W, but can be pushed up or down in power by laptop companies depending on how they build their systems.

For Tiger Lake, Intel has removed the concept of a 'nominal TDP', instead stating that 'TDP is not useful' for its partners or its customers for this product line. This is something we at AnandTech disagree with - the Thermal Design Point of a processor enables partners, customers, and press to enable design decisions or enable at-a-glance performance metrics. By not providing that nominal TDP, and instead insisting that OEM partners 'can choose from 12W to 28W', purposefully obfuscates the end-user performance away.

To that end, as Intel is not providing a nominal TDP, how it reports the base frequencies has to change. Intel's own specification tables listed very high base frequencies compared to the previous generation, and it was not until much later that we discovered (note, we weren't told) that the base frequencies presented related to the 28 W mode of operation. Thus any comparison to the previous generation using these numbers in that table provided becomes null and void, and it means at AnandTech we have to present our data in a different way - we have to add in another column to complicate things a lot further.

Ultimately, it is the 12 W number that should be most applicable to end users if they want to compare to the previous generation. It is likely that this will be the number we use moving forward when talking about these processors.

Intel splits its processors by core count, graphics, and frequencies. Anything listed ‘G7’ is meant to signify the highest class of graphics, although it is worth noting that this means 96 EUs for Core i7 parts but only 80 EUs for Core i5 (which also has less L3 cache). Below this is G4 graphics, with only 48 execution units enabled. Only the top Core i7-1165G7 gets the highest graphics frequency, too. The Core i3 processors have a reduction in memory support, and that bottom Core i3-1115G4 only has two cores.

The 7-15 W processors are the former ‘Y-series’ processors, now known as UP4.

There is only a single Core i7 in this rage, with the Core i5 part having fewer EUs and lower frequencies, before the Core i3 parts get split into quad-core and dual core with only 48 EUs a piece. 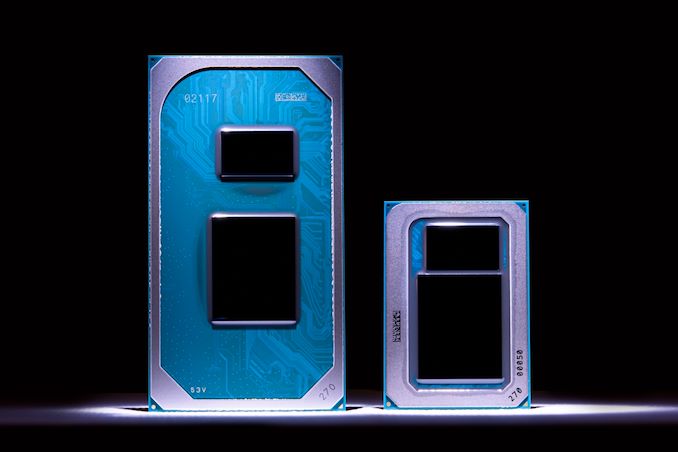 These processors fit into the UP4 power envelope mostly due to the base frequency being so low, a trait of Intel’s low-power processors over the years. 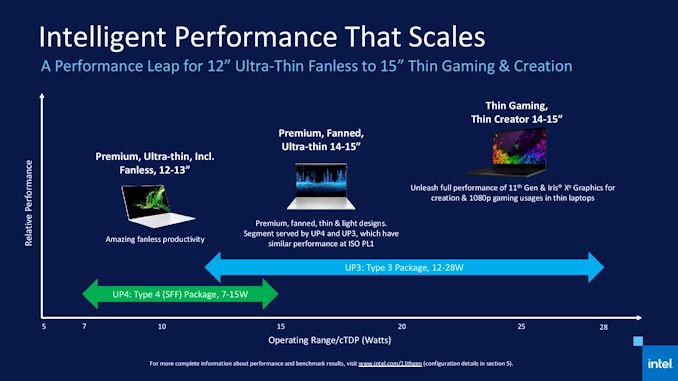 The goal of these parts is to spread from Fanless designs around 9 W with the UP4, and then up to 28 W perhaps with a discrete GPU at 28 W. As with the previous generation of notebooks on Intel’s 10th Generation, we expect to see some Tiger Lake designs that take the highest performing processors and enable higher power modes, in that 25-28W range. This will enable these products to offer better sustained performance after the turbo period has ended, such as for rendering and video encoding.

Intel’s turbo boost technology has come under a lot of scrutiny of late, primarily for seeing some impressively high power numbers within that turbo period. Intel states that the Turbo mechanisms are there to take advantage of improvements in system design until the system has other factors that take priority, such as thermals and or power. This time around, Intel explains that Tiger Lake has better turbo algorithms, allowing for the system to turbo CPU/GPU/fabric as required within the turbo window. The whole system is a feedback loop which takes in inputs such as the workload, on-system sensors, power limits, and a balancer to find the right frequencies. 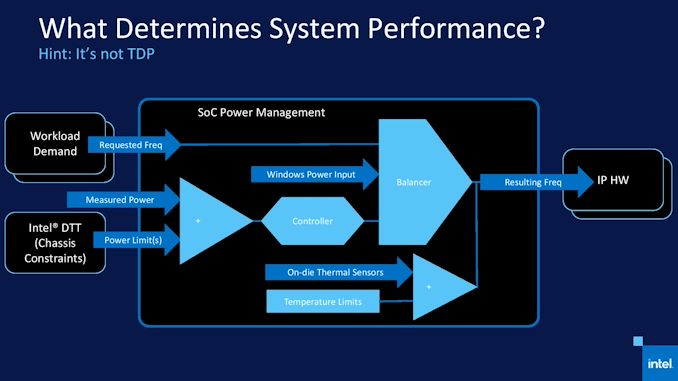 So while Intel’s ‘TDP’ value, also known as Power Limit 1, is anywhere from 7 W to 28 W depending on the system it is installed to, the power level when in turbo modes can be a lot higher. We’ve seen this secondary power level, PL2, increase over the years to +4 W over TDP to +20 W over TDP. In the previous generation of Ice Lake, we saw 15 W processors peaking at 44 W in turbo mode. Intel even provides a handy diagram: 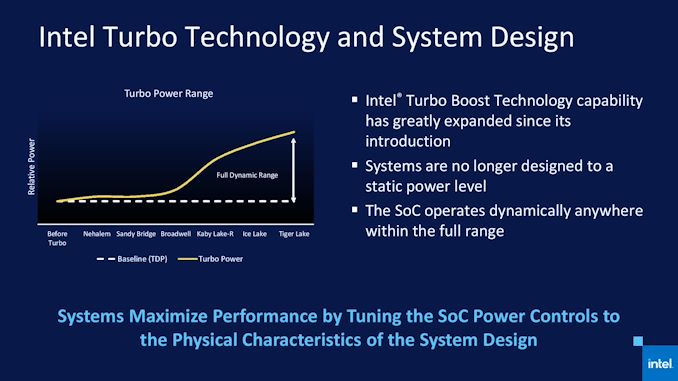 What does this mean for Tiger Lake? Based on Intel’s own numbers, peak turbo power is around 50 W, either when plugged in or off the power. Intel is keen to point out that it manages its turbo algorithms to ensure a consistent experience for its customers whether the system has access to wall-power, or is relying on the battery. 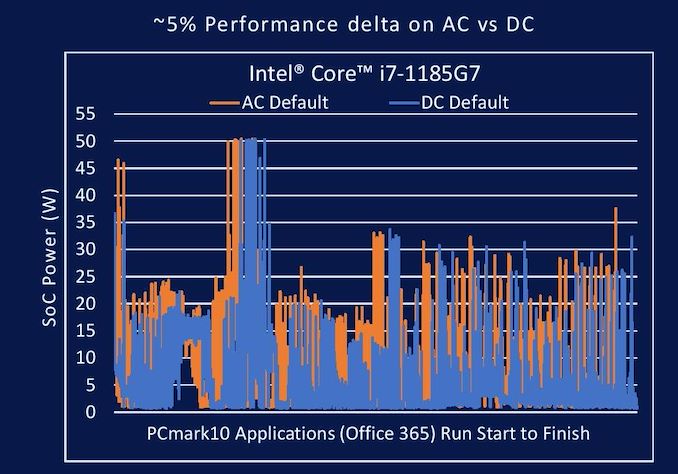 Unlike the last generation, where we were able to test Intel’s own mobile development platforms ahead of a launch, we’re unsure exactly what Tiger Lake product will be the first in our labs for testing. It will be interesting to see what we are sent, and how that system performs by comparison.

Over the page, read about Intel's new branding, Intel Evo, Tiger Lake performance, and the future announcements from Intel.