ASRock Rack has unveiled its latest small form factor motherboard designed for AMD's EYPC processors, the ROMED4ID-2T. It is based on a new proprietary form factor similar to Mini-ITX, affectionally colloquialized as 'Deep' Mini-ITX, which is slightly larger than standard mini-ITX. The board supports for EPYC Rome 7002 processors up to 64 cores.

Being able to amalgamate up to 64 cores with a mini-ITX motherboard isn't a small feat; the ROMED4ID-2T does it for users looking to build a server with a small overall footprint. This model opts for a new wider proprietary design, the 'deep mini-ITX' form factor with dimensions of 6.7 x 8.2 inches, rather than 6.7-inch square for regular mini-ITX.

The main obvious limitation with such a small motherboard size and a large socket is that not all of the features of the processor is made available - there are some sacrifices to put it all in. That starts with the memory support, with this model only having four memory slots, and therefore four memory channels, rather than the standard eight channels that EPYC Rome can provide. The other is PCIe 4.0 support - there is one PCIe 4.0 x16 full length slot, and six Slimline PCIe 4.0 x8 ports, but that is still far fewer than the 128 lanes this CPU can provide. 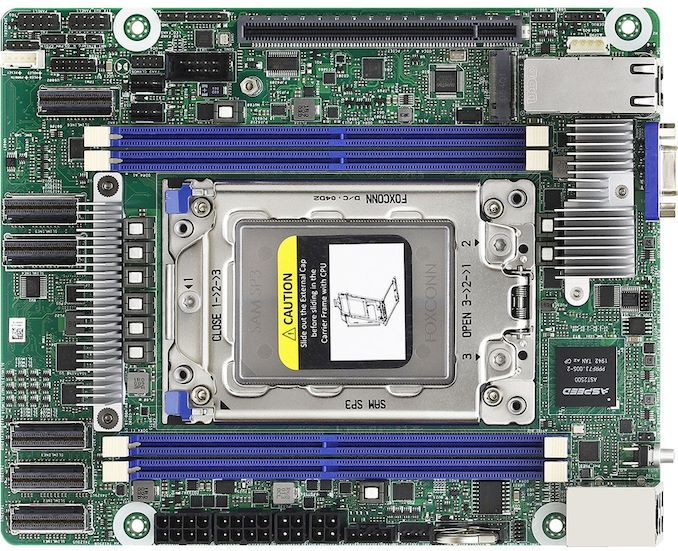 For storage devices, other than the single M.2 2280 PCIe 4.0 x4 slot, there is plenty to accommodate multiple drives, despite the size limitations, with up to sixteen SATA ports support from two of the Slimline ports, which ASRock states can be configured within the BIOS. This also includes support for bulk U.2 storage, with two Slimline ports operating at PCIe 4.0 x8 or eight SATA ports, and the other four Slimline simply listed as being PCIe 4.0 x8 only.

Being primarily marketed as a server-focused model, it includes many of the usual suspects regarding internal headers, including one for IPMB, PMBus, and a 13-pin LPC TPM header. There are also three 4-pin fan headers, each with its own fan fail LED.

Regarding connectivity, the ASRock Rack ROMED4ID-2T includes an Intel X550-AT2 10 Gb controller, which adds two 10 GbE ports on the rear panel, as well as a dedicated Realtek RTL8211E Ethernet port for the board's IPMI. A single DB15 D-Sub video output is present for users looking to access the system physically over the IPMI, with a UID LED button and a pair of USB 3.2 G1 Type-A ports.

At present, ASRock hasn't given any information regarding pricing or availability, but we expect to hear something shortly.