How can you take advantage of the improvements found in the new CXT core?  Unfortunately it isn't as simple as popping in a new chip, you will have to make an update to your BIOS to recognize the processor as well as to enable the enhanced WHCR and the Write Merge Buffer.  As you'll be able to see from the tests AnandTech conducted, the K6-2 400 using the CXT core exhibited a 7% increase in overall performance in comparison to a K6-2 400 without the modifications enabled in the WHCR and with the Write Merge Buffer.  As far as gaming performance goes, the K6-2 400 doesn't really benefit all that much from the Write Merge Buffer, although you may see a few fps increase in performance in a few of your games, nothing too major.

The Socket-7/Super7 Test System Configuration was as follows:

The Pentium II comparison system differed only in terms of the processor and motherboard in which case the following components were used:

The Pentium II Xeon comparison system differed only in terms of the processor and motherboard in which case the following components were used:

The following drivers were common to both test systems: 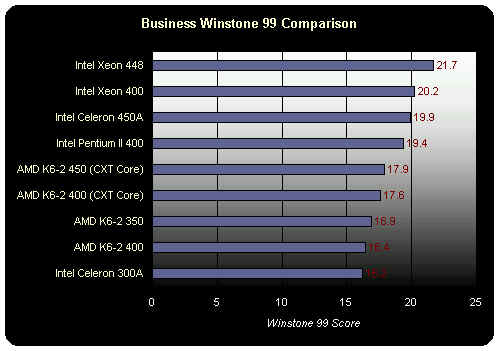 If you'll notice, without BIOS support, the K6-2 400 CXT is actually slower than a K6-2 350 without the core improvements.   However, once you enable the Write Merge Buffer and allow the WHCR modifications to take place, the picture does change considerably.  One interesting thing to note is that under Winstone 99, Intel processors score considerably higher than their Super7 counterparts.  This is primarily because Winstone 99 centers itself around multitasking performance, where the Pentium II, Celeron, and Xeon processors excel.   Since their L2 cache runs at a much higher speed than that of the K6-2, they allow the multiple applications, which fit almost entirely in the L2 cache, to perform much better than those that run on Super7 platforms where the L2 cache is limited to run at 100MHz (without overclocking that is).

Speaking of overclocking, the K6-2 400 engineering sample AnandTech received wasn't the world's most stable overclocker, however you can realistically expect to be able to overclock the 400MHz parts to at least 450MHz, unfortunately it seems as if 500MHz may be pushing it unless you get a chip from a very good batch.