Shuttle pioneered the SFF market back in 2001 with their first XPC, and they've continued to refine and improve their design over the years. There were many fans of the G2 series in particular, and more recently, the G5 has turned a lot of heads. The G5 is their smallest design yet, and while it does not include all of the options that some would like, it does work very well as a standard computer. The front is attractive and conservative, and performance - both in speed as well as in noise levels - is very good.


Taking a look at their latest P series, Shuttle has departed somewhat from the "smaller is better" philosophy of the G5 and is catering more towards the performance and enthusiast crowd. Externally, the front of the case is a silver/gray/blue finish with fold-down doors obscuring the 3.5" and optical drive bays. The SB81P and SB95P have a similar front panel, although in different colors. Starting at the top, we have the slots for flash memory, then the door for the optical drive; next is the floppy/3.5" door, and at the very bottom is a door for the front ports. The region containing the power and reset buttons is fixed, if you were wondering.


For those interested in a minimalist design as far as lighting goes, the SN25P is great. The power button lights up with a faint blue glow, and above it is the HDD activity LED. There are no other lights or indicators to distract you. Some people might like more pizzazz from their computer, but most of us are fans of a more conservative approach. The SN25P is an attractive case that would work very well in a home or office environment.

There are a couple of small items that we would like to see addressed. First is the lack of a cover on the 3.5". If you use it for a hard drive or leave it empty, even though the door obscures it from view, we would like to have a cover in place. (Shuttle may include such a cover once the units start shipping to retail, but one was not present with our review unit.) The second may be a make-or-break deal for potential buyers, and that's the color of the front panel. We like it more than the shiny black of the SB81P, but others might prefer some other color scheme. At present, we are not aware of any alternative panels for the P series, so if you would like something other than the grayish-blue coating, you'll either have to do that on your own or you'll have to wait. These are admittedly very minor points, but for a case such as this, we expect everything to be "perfect". 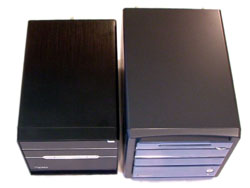 One last item that we have already hinted at is the size of the SN25P. It's larger than many of the older XPC cases, so if you truly want the smallest case possible, this is not it. You can see in our comparison photo how it measures up to the G5 chassis. It is larger in all three dimensions. You'll see in the features section why Shuttle has increased the size, and we really don't mind, considering all that has been added, but some might prefer a more minimalist approach, and for them, we would have to recommend sticking with the "tried and true" G5 chassis.