Intel Launches Rocket Lake 11th Gen Core i9, Core i7, and Core i5

All of these new processors are LGA1200 processors, and a result they will be enabled in 500-series motherboards. There is also some 400-series support, however it depends on the platform. Here’s the trusty AnandTech Guide for support:

The reason why Rocket Lake will not work in H410 or B460 motherboards is because these chipsets are built on Intel’s older 22nm process. There is something in the design of those chipsets, likely to be related to signal integrity, which means they cannot be supported, at least at the PCIe 3.0 speeds required. Given previous motherboard firmware, we might see unofficial support later down the line, even if only in PCIe 2.0 mode. 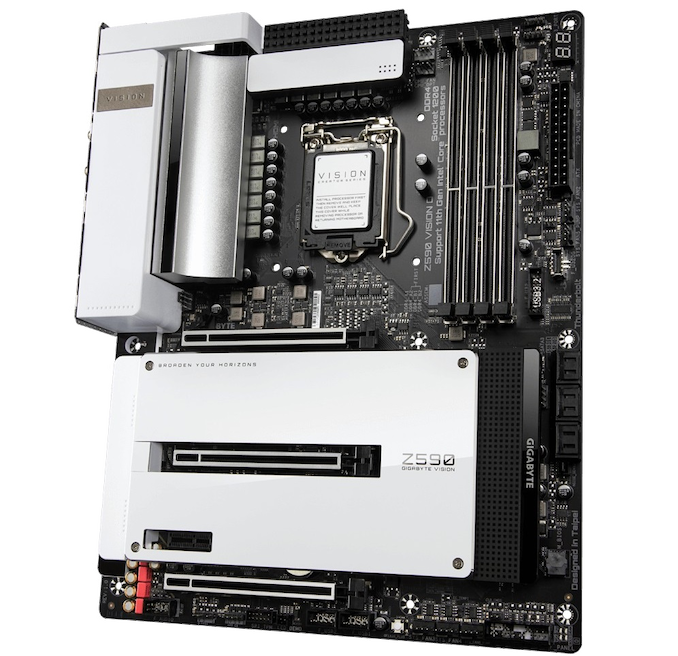 However, the lead platform for Rocket Lake will be the Z590 platform. We’ve already published a large overview of the 50+ motherboards on the market, but the new features boil down to:

Here's the comparison of Z590 compared to the two previous generations of Intel high-end motherboards:

The new H570 and B560 motherboards reintroduce memory overclocking, a feature that was removed from the 400-series budget motherboards.

Here is the slide Intel provided for 500-series, though it is worth mentioning some of the caveats: 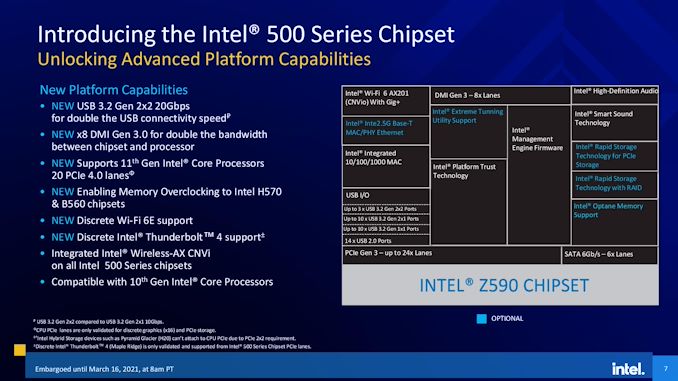 In this slide, it states that discrete Wi-Fi, 2.5 gigabit Ethernet, and Thunderbolt 4 are supported on 500 series. These are optional upgrades for the motherboard vendors, so not all motherboards will have them, and in each case they also require additional hardware costs for the motherboard manufacturer, such as an RF module for Wi-Fi, a PHY for Ethernet, or a PHY for Thunderbolt. These could all be added to any other motherboard, AMD or Intel, with discrete controllers which are slightly more expensive – those controllers don’t have to be Intel either. But to be clear, they are not unique to offerings to Z590, nor are they natively offered by default on all systems.

All of the 10th Generation Comet Lake processors will work in all 500-series motherboards, and get all the features, except the double CPU-to-Chipset bandwidth, as that specifically requires Z590 + 11th Gen Core CPU.

It should be noted that anyone already with a 400-series or 500-series motherboard, or those looking to purchase one, will need a BIOS update in order to enable the latest performance enhancements. In our testing, we found that the BIOS on our boards when they arrived in our offices were quite old (from January), and the latest microcode from Intel should help increase performance and cache latency. Some may be updated to February microcode, which does get most of the way there to peak performance, but the latest should always give the best results.

For users looking for performance data, we have already reviewed a retail unit of the Core i7-11700K, and we thoroughly encourage you to check out that review. Intel’s own numbers for today’s launch use a variety of best-case scenario workloads that emphasize Intel’s internal accelerators rather than raw core performance – it should also be noted that Intel now considers MLPerf a ‘representative workload’, which is a far cry from the real world workload messaging we received only two generations ago. 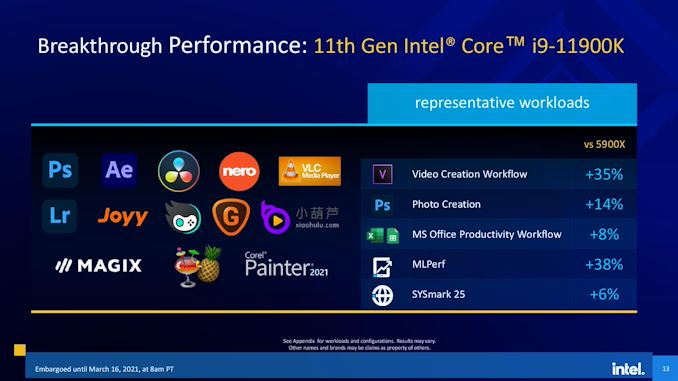 On the Overclocking Enhancement side of things, this is perhaps where it gets a bit nuanced. For a while now Intel has been binning its K processors to within an inch of their maximum supported frequencies, and turbo boost techniques like favored core and Thermal Velocity Boost also push the margins on the cores that support it. So what can Intel focus on for overclocking this time round?

With Rocket Lake, Intel is leaning into the memory side of things. These new Rocket Lake processors now support geared ratios between the memory controller and the DRAM data rates. Traditionally on Intel these have operated on a 1:1 ratio, and in order to push that DDR4-5000 memory, like we did in our review of that premium Corsair kit, it required a processor with a good memory controller. With the 2:1 ratio, the memory controller will now operate at half speed, in a more comfortable zone, allowing memory overclockers to go beyond traditional limits – DDR4-5000 means that the memory controller is now only operating at 1250 MHz, rather than 2500 MHz (because DDR4 is measured in transfers per second, and there are two transfers per clock in Double Data Rate DDR memory). This also means that in order to match the internal clocks on DDR4-3200, users will have to start pushing the memory itself to DDR4-6400 to get the memory controller back on a level footing when in that 2:1 ratio. Nevertheless, this feature does allow the memory to be tested to its limits without the bottleneck of the CPU.

As mentioned in the previous page, Intel is going to use default gearing as a factor in product differentiation. The Core i9-K and i9-KF processors will officially support DDR4-3200 at 1:1, while all other CPUs support DDR4-3200 at 2:1. All CPUs will also support DDR4-2933 at 1:1. It should be noted however that motherboard manufacturers seem to be ignoring this - all the motherboards we have tested to date run at DDR4-3200 at Gear 1:1 regardless of the CPU. This is likely because the motherboard vendors feel confident in the ability of their products to enable 1:1 in all situations.

Also on memory overclocking, users that have tried this will note that in order to change the memory ratio, it requires a restart. With the new Z590 system, Intel has devised a system that will let a user select two different memory ratios, and it will enable both at boot time. Then, once in the operating system, a user can switch between them for different benchmarking modes. What this does is allow extreme overclockers, particularly those going for world records with sub-zero coolants, to boot at the lower memory speed, then run the test at a higher memory speed, then instantly revert back to the slow speed. Currently they have to run at the high speed all the time, which can be liable to instability. It’s more one for the extreme overclockers, but Intel has added it here.

Other new features in the overclocking toolkit include AVX-512 offsets and voltage guard bands, enabling users to overclock the processors without overclocking AVX-512 and incurring a heavy power consumption penalty. Intel has also put in an option to disable AVX altogether, which means that users who don’t want to worry about AVX-512 draining almost 300 W from an errantly loaded program, it can be disabled directly in the firmware. 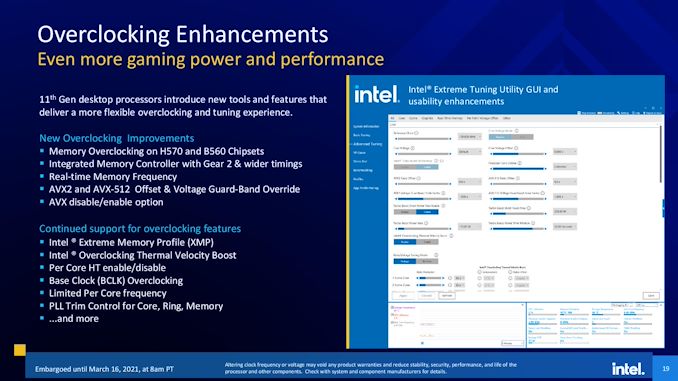 Intel is also continuing support for a number of overclock-related features, such as per-core HyperThreading, per-core frequency adjustment, and fine-grained PLL controls. Intel has stated that with Rocket Lake, it has opened up some of the features to enable proper BCLK overclocking again, however we wait to see if there is a good range for overclockers to play with.

All these new features are enabled when a 500-series motherboard and a new Rocket Lake 11th Generation Core processor. Support with Comet Lake will be limited.

Intel has officially confirmed to other press outlets on the record that retail of these processors will start on March 30th. Expect to see reviews of the top processors go live around the same time, or you can read our Core i7-11700K review today (because a retailer sold some early, and we got one to test).