Note: PC-Club has started offering an alternative case for the Silencer since we received our initial unit for testing. The new case is a CoolerMaster ATC-620, and it is black in color. The internals remain the same, and given our comments on the LCD, we think that the CoolerMaster case is an acceptable alternative. This review, however, is using the Athenatech case and so we cannot comment on the actual build, aesthetics, etc. of the CoolerMaster. Also, the images in this article are rather grainy, and for this, I apologize. Unfortunately, it is a limitation of my current camera (which I will hopefully replace in the near future). The case and other components should not have the speckled look seen in the images, if that's any help. Here's a quick digital camera mini-review: do not purchase a Fuji S5000 - the ISO speeds are limited to 200 and 400, which results in grainy or grainier images. 10X optical zoom is nice, but it doesn't make up for the low quality sensor.


The exterior of the Silencer is relatively interesting. It's a thinner design and it could blend in quite well as a HTPC (Home Theater PC) system. As configured, that is not the intended market; but with the addition of a TV-tuner card, that is definitely one potential use. The case is made of silver plastic and steel with blue highlights. Opinions will differ, but we find it to be just different enough from the standard case to be attractive, without going into the realm of the gaudy. The top of the case (or side, depending on how you set it up) has a ventilation area that is above the CPU region at the rear of the case. It should help a bit in getting cool air into the case, allowing for the use of fewer fans.

The front panel has silver doors covering the optical drive and front ports, with a sliding blue door hiding the floppy drive. Power and reset buttons are located in the center blue area of the case, and in the lower right are three buttons for adjusting the front LCD. The remaining sections in the top-left, top-right, and middle right are simple covers that are fixed in place. What was that about an LCD? That's right, there's a small LCD located at the bottom of the blue stripe. Information on the temperatures of the CPU, HDD, and system is displayed, as well as the time and hard drive activity. The LCD is back-lit by a moderately bright blue light. If you want a dark case, you probably won't care for the LCD, but enterprising users can probably figure out how to disable the light. Also shown in the LCD is the current time and date, and you can set an alarm as well. (Who puts an alarm on a computer case? Am I alone in thinking this is just a little odd? It's something that I would expect from a $5 digital watch, not a moderately expensive computer case.) 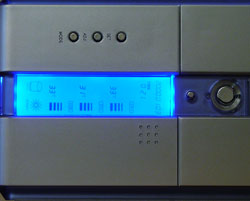 We like the concept of the LCD, but there are a few problems with it. First, the light as we already mentioned might be too bright for some tastes. A simple on/off button for the light would have been a great addition. The more important problem with the LCD is that it loses its settings whenever the system is turned off. So, unless you run the system 24/7, the clock and calendar will be of little use. An even bigger gripe is that the alarm defaults to "on" whenever the system is booted. If you leave it running, 11 hours after powering on, the alarm will go off. It's not the end of the world, but it shows lack of attention to detail on the part of Athenatech. If we owned this case, we would seriously consider unplugging the LCD/alarm in the present configuration, mainly due to the alarm going off at random times. It's unfortunate, as the case is very attractive otherwise.

One item to be aware of is that while the case appears to be designed with the ability to function in either a tower setup or lying flat, it really doesn't do either perfectly. In a vertical orientation, you'll need to worry about the DVD drive and take care when inserting and removing CD/DVD discs. Using it in the desktop orientation seems to be a good idea, but the temptation to block the vents on the top of the case with papers or - heaven forbid! - a monitor might be too much for some people. An LCD would probably be fine sitting up there, but we definitely wouldn't recommend placing a CRT on top of the case. The other problem with laying the case flat on its side is that the LCD on the front is made for the vertical orientation, so the text would be sideways. This doesn't prevent the use of the case in such a configuration, but again, it is a small concern that will affect certain users.