SPEC2017 and SPEC2006 is a series of standardized tests used to probe the overall performance between different systems, different architectures, different microarchitectures, and setups. The code has to be compiled, and then the results can be submitted to an online database for comparison. It covers a range of integer and floating point workloads, and can be very optimized for each CPU, so it is important to check how the benchmarks are being compiled and run.

We run the tests in a harness built through Windows Subsystem for Linux, developed by our own Andrei Frumusanu. WSL has some odd quirks, with one test not running due to a WSL fixed stack size, but for like-for-like testing is good enough. SPEC2006 is deprecated in favor of 2017, but remains an interesting comparison point in our data. Because our scores aren’t official submissions, as per SPEC guidelines we have to declare them as internal estimates from our part.

For compilers, we use LLVM both for C/C++ and Fortan tests, and for Fortran we’re using the Flang compiler. The rationale of using LLVM over GCC is better cross-platform comparisons to platforms that have only have LLVM support and future articles where we’ll investigate this aspect more. We’re not considering closed-sourced compilers such as MSVC or ICC.

Our compiler flags are straightforward, with basic –Ofast and relevant ISA switches to allow for AVX2 instructions. We decided to build our SPEC binaries on AVX2, which puts a limit on Haswell as how old we can go before the testing will fall over. This also means we don’t have AVX512 binaries, primarily because in order to get the best performance, the AVX-512 intrinsic should be packed by a proper expert, as with our AVX-512 benchmark.

To note, the requirements for the SPEC licence state that any benchmark results from SPEC have to be labelled ‘estimated’ until they are verified on the SPEC website as a meaningful representation of the expected performance. This is most often done by the big companies and OEMs to showcase performance to customers, however is quite over the top for what we do as reviewers.

Single-threaded performance of TGL-H shouldn’t be drastically different from that of TGL-U, however there’s a few factors which can come into play and affect the results: The i9-11980HK TGL-H system has a 200MHz higher boost frequency compared to the i7-1185G7, and a single core now has access to up to 24MB of L3 instead of just 12MB. 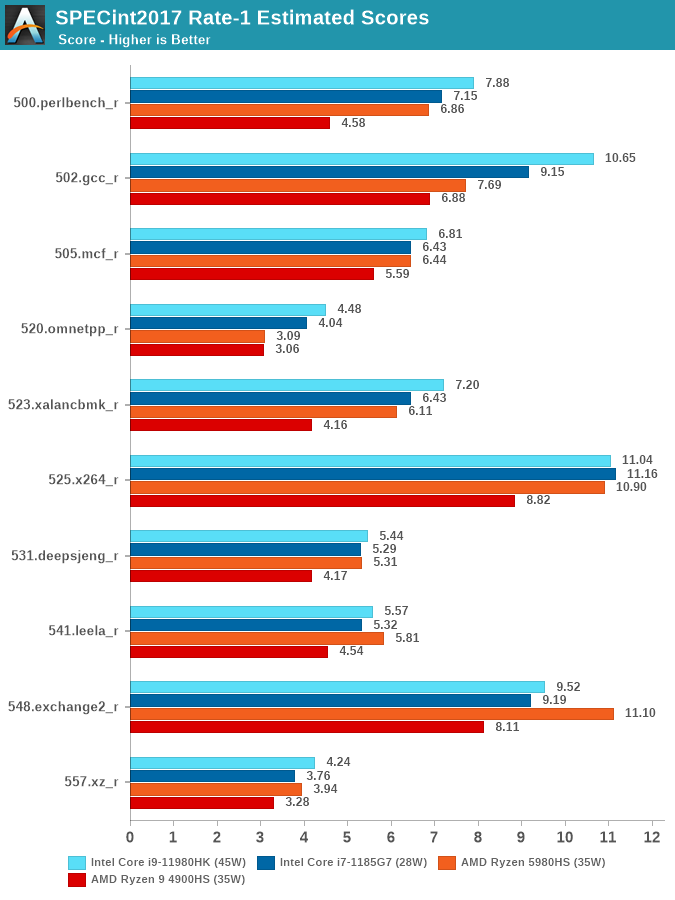 In SPECint2017, the one results which stands out the most if 502.gcc_r where the TGL-H processor lands in at +16% ahead of TGL-U, undoubtedly due to the increased L3 size of the new chip.

Generally speaking, the new TGL-H chip outperforms its brethren and AMD competitors in almost all tests. 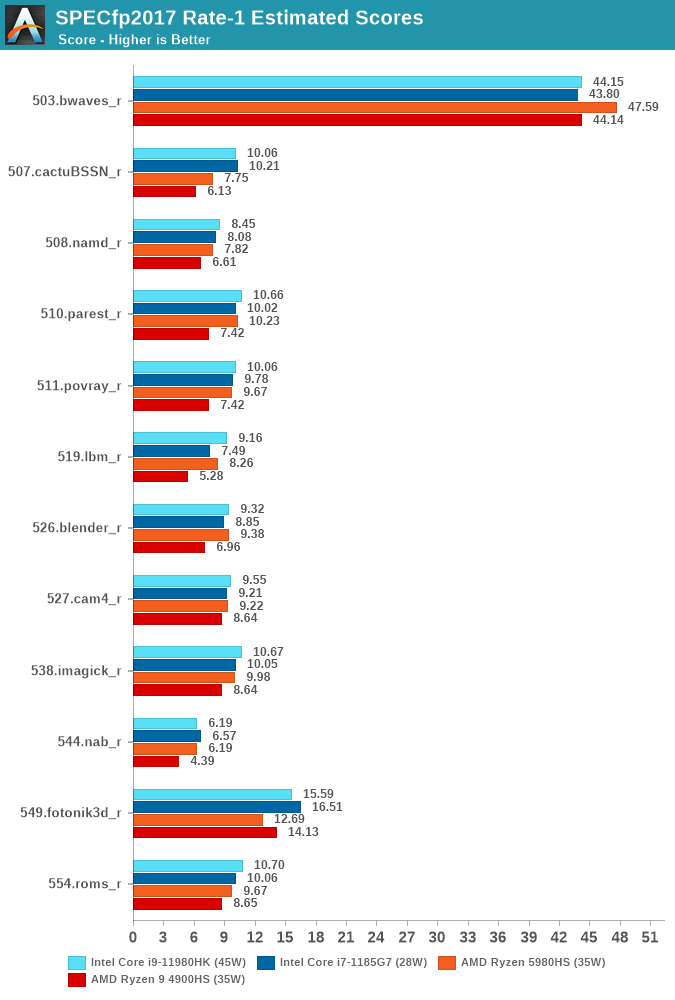 In the SPECfp2017 suite, we also see general small improvements across the board. The 549.fotonik3d_r test sees a regression which is a bit odd, but I think is related to the LPDDR4 vs DDR4 discrepancy in the systems which I’ll get back to in the next page where we’ll see more multi-threaded results related to this. 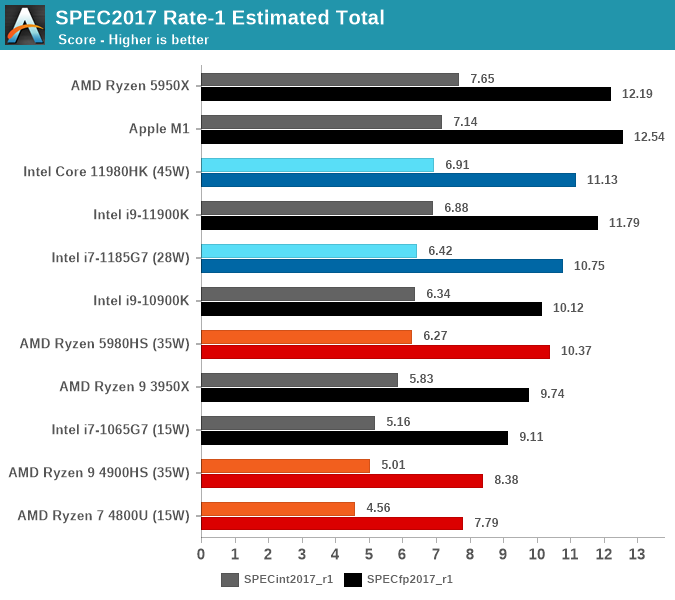 From an overall single-threaded performance standpoint, the TGL-H i9-11980HK adds in around +3.5-7% on top of what we saw on the i7-1185G7, which lands it amongst the best performing systems – not only amongst laptop CPUs, but all CPUs. The performance lead against AMD’s strongest mobile CPU, the 5980HS is even a little higher than against the i7-1185G7, but loses out against AMD’s best desktop CPU, and of course Apple M1 CPU and SoC used in the latest Macbooks. This latter comparison is apples-to-apples in terms of compiler settings, and is impressive given it does it at around 1/3rd of the package power under single-threaded scenarios.