We covered the major differences between all of the currently shipping processor cores recently, and if you're not familiar with the various models, we would suggest that you give that a read. AMD arguably provides the best computing experience, both at the low end, the high end, and everything in between. However, their processor naming scheme can get a bit confusing, and especially the less experienced shoppers could end up with the wrong processor if they simply went by model numbers. There are no less than six currently shipping Athlon 64 3200+ chips, but we're only recommending one or two of those at present. Make sure that you get the right one! 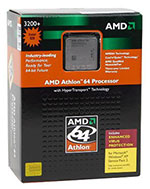 The 3200+ remains to be the best option for socket 939, if you're trying to cut costs, yet still maintain a reasonable performance level. 2.0 GHz makes it 11% faster than the 3000+ and 9% slower than the 3500+. Although, the Winchester/Venice cores actually outperform Newcastle slightly clock for clock, so the 3500+ Newcastle may only be a few percent faster in certain applications (games, mostly). The 3000+ costs $146, and overclockers may be tempted to go that route rather than spend the extra $44. If you get a good motherboard and RAM for overclocking, the 3000+ may actually reach 2.5+ GHz, but it will require a 280+ MHz CPU bus speed compared to 250+ MHz for the 3200+. Depending on your overclocking skill, the 3200+ will probably get you farther than the 3000+. If you want to add SSE3 support, the Venice [RTPE: ADA3200BPBOX] cores cost an additional $20 relative to their Winchester [RTPE: ADA3200BIBOX] counterparts. SSE3 might help in certain encoding applications, and $20 isn't a major price difference, so it's definitely worth a thought. For now, we'll save the money for use elsewhere. 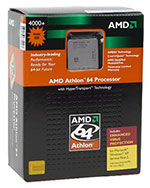 While the FX-55 remains the top-performing 939 part, we expect the new 90nm 4000+ [RTPE: ADA4000BNBOX] to give it a run for the money, particularly with overclocking. You may not be able to find the retail chips on sale right now, in which case, an OEM CPU is an option - overclockers are probably going to add a high-end HSF like the Zalman 7000 or Thermalright XP90 anyway. Some people feel that the retail chips are still a better choice for the improved warranty, and anecdotes of better overclocking with retail parts can be found on many forums. We're not sure if retail parts are actually better overclockers, but it's difficult to pass up on the 3-year warranty for a mere $18 increase. As a less expensive alternative that will still offer more performance than the 3200+ and 3500+, the new 3700+ [RTPE: ADA3700BNBOX] is definitely worth considering. The maximum overclocked speed is likely to be very similar to the 4000+, and it's quite a bit cheaper at $339. If you don't intend to overclock, of course, go with the fastest CPU that you can reasonably afford.

If this were a budget guide, there would be many other options that we would consider, including boards using the VIA K8T890 and ATI Radeon Xpress 200 chipsets. For Mid-Range and above, nForce 3 and 4 are still our preferred choice. nForce 3 is on the way out, along with AGP, but if you have a good quality AGP card that you want to keep, it's a reasonable upgrade choice. For new systems, however, we recommend nForce 4 boards. The main difference between our Mid-Range and High End boards is the support (or lack thereof) for NVIDIA's SLI technology. 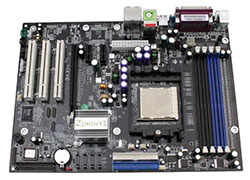 Considering the price difference (almost $20), we can't justify the additional cost for most of the competing nForce 4 Ultra motherboards. The Chaintech board lacks Firewire support, and the documentation and manual may not be the greatest, but it's still a high-performing board at a budget price. The Ultra model adds support for RAID and SATA2 as well as 1000 MHz HyperTransport, so we feel that it's worth the extra $2 relative to the nForce 4X model. Biostar, ECS, and Foxconn offer similarly equipped motherboards at a slightly higher price, but there's little reason to recommend their boards over the Chaintech - features and quality are very similar between these manufacturers in our experience, so we'll go with whatever's cheapest.

If you want additional features, ASUS, DFI, Gigabyte, MSI, and a few others make more expensive boards, and they certainly aren't a bad choice. DFI's Ultra board in particular is interesting, as it includes two physical PCIe X16 slots. While DFI doesn't ship an SLI connector and it may or may not be possible to mod the Ultra chip into an SLI chip, the board can still run dual graphics cards for multi-monitor support. DFI's boards also offer improved voltage ranges, which can help the overclockers, especially with RAM like the OCZ VX. Higher voltages mean more heat, which generally means more noise, so it's not something that everyone will appreciate. Still, most of these boards are at least $40 more than the Chaintech, so unless you really want the additional features, it's not worth the money. The nicer boards are also very close in price to some of the SLI boards, so at that point, you may as well go all the way to our High-End recommendation. 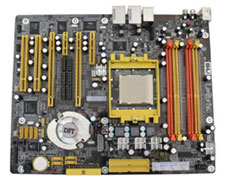 For the high-performance enthusiast, SLI is the current crème de la crème, so an SLI motherboard is a must. The DFI Platinum board was co-winner of our Gold Editor's Choice award, and the differences between the UT and the "full version" are relatively minor. The UT doesn't include quite as many accessories, and the main omission is the front panel box and 5.1 audio instead of 7.1 audio; it also costs about $20 less. We don't feel that either of those features is really necessary, so we stuck with the standard model. The included Karajan sound module actually does quite well, so we don't see much need to purchase an add-in sound card for most users. The one issue worth mentioning on the DFI boards is that running with ultra-high voltages (using the 3.5V jumper) seems to cause some problems. That's only a concern for OCZ VX and Mushkin Redline users, really, and if you keep the voltage at stock you should be fine.

Honestly, all four SLI motherboards that we tested in our SLI Roundup (ASUS A8N Deluxe, Gigabyte GA-K8NXP-SLI, DFI LanParty SLI-DR, and MSI K8N Neo 4 Platinum SLI) are decent. The MSI board offers some great features, including the Sound Blaster 24-bit Live onboard audio. Unfortunately, we have recently discovered some performance issues when using the board with 90nm processors, so until MSI can release a BIOS update that addresses the issue, we would avoid the board. ASUS separates the two X16 slots by a larger margin, which should offer slightly better cooling for the top slot. However, it's a non-standard layout, and that could present problems in the future. We've already covered DFI, and Gigabyte has their "everything plus the kitchen sink" design. All four manufacturers are now offering "lite" versions of their SLI boards with reduced feature sets and prices, and in many cases, the missing features won't be missed. You can see the full list of SLI motherboards in our Pricing Engine. EPoX and Biostar also make SLI boards now, but we have not tested them, so we really can't comment on them other than to say they exist.

Update: After this Guide was initially written, it came to light that the MSI boards are having problems with 90nm parts. The MSI Neo4 SLI was our original high-end pick, but we changed that out after the new information. Sorry for the confusion!