Following on from AMD's official announcement during Computex 2022 that its highly anticipated Ryzen 7000 series of processors will land sometime in Q4 2022, ASUS has lifted the lid on its flagship AM5 motherboard. Based on AMD's 'Extreme' X670 chipset variant, the ASUS ROG Crosshair X670E Extreme motherboard is fully loaded with many features, including PCIe 5.0, support for DDR5 memory, and large 22-phase power delivery for enthusiasts.

Designed to offer leading-edge performance for AMD's Ryzen 7000 processors, the ASUS ROG Crosshair X670E Extreme, ASUS has gone all out with a premium controller set and a wide array of features for users to get the most out of the new AM5 socket. This includes a typical ASUS ROG design with plenty of RGB LED lighting and its latest Q-Design features designed to make installation as easy as possible. It also benefits from an AniMe Matrix 2 LED display and ASUS's LiveDash OLED for maximum customizability.

Q-Design includes new release buttons for the PCIe slots and right-angled connectors on the right-hand side of the board for better cable management. 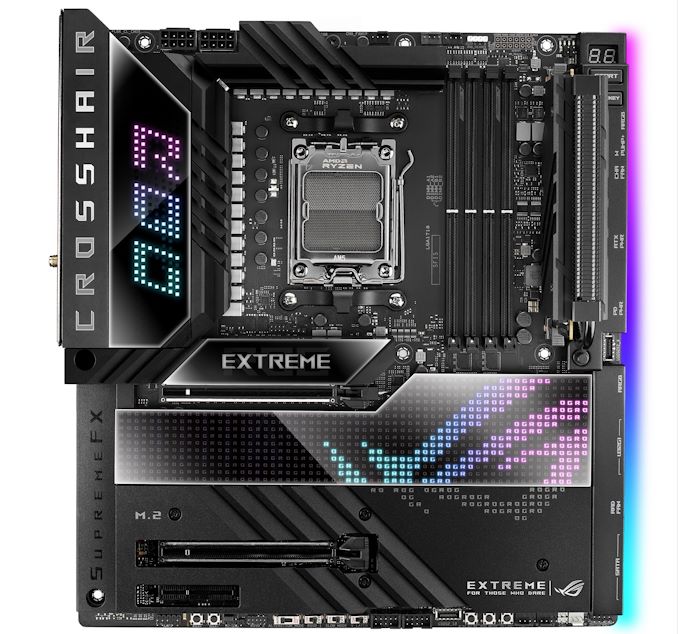 Although ASUS hasn't revealed a complete list of specifications, we know the X670E Extreme will feature two full-length PCIe 5.0 slots operating at x16/x0 or x8/x8, with a smaller PCIe slot at the bottom. It also benefits from five M.2 slots, with two of these conforming to the latest PCIe 5.0 specification and adding USB4 ports and a USB 3.2 G2x2 Type-C front panel header for connectivity. ASUS also includes a ROG M.2 add-in card next to the four DDR5 memory slots, although we don't know what type of drives these will support at the time of writing.

As we previously mentioned, ASUS hasn't unveiled the full specifications list of the ROG Crosshair X670E Extreme motherboard, nor how much it will cost. We expect ASUS to reveal more details as we head closer to AMD's Ryzen 7000 launch, expected sometime in the fall of 2022.