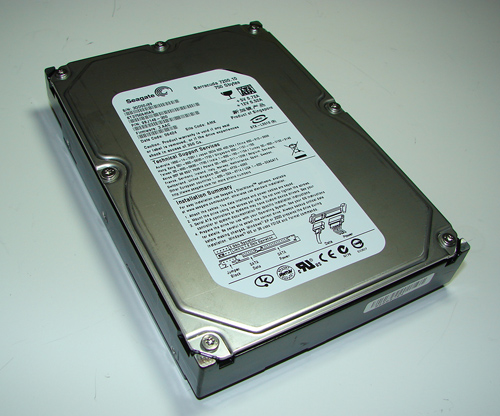 The external casing design of the Seagate Barracuda 7200.10 series is basically unchanged from the previous generation 7200.9 series. The drive is based on the industry standard 3.5" form factor platform with pertinent part number and warranty information embossed on a white sticker on the top of the casing. However boring the exterior design maybe, lurking under the plain casing is an impressive 750 GB storage capacity that did not require a new form factor or additional platters. Based upon the potential of perpendicular technology, this same casing could be holding two terabytes of capacity in a relatively short time. 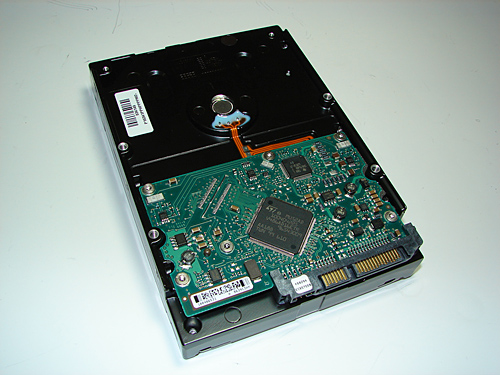 The 7200.10 SATA family ships with the Serial ATA data and power connectors only. There is no longer support for the 4-pin Molex power connector designed for use with older ATX power supplies. To the left of the data and power connectors is a four pin jumper block. This jumper block will determine whether the drive operates in Serial ATA/150 or Serial ATAII/300 mode. Two pins are enabled by default, meaning the Seagate Barracuda 7200.10 ships and will operate in SATA/150 mode. In order for the drive to operate in Serial ATAII/300 mode, the jumper must be removed. Enabling SATAII/300 is recommended if you have a compatible motherboard that fully supports SATA II/300 operations. While this feature was advantageous for burst transfer rates in our synthetic benchmarks, overall we did not see any real improvement in our real world benchmarks. 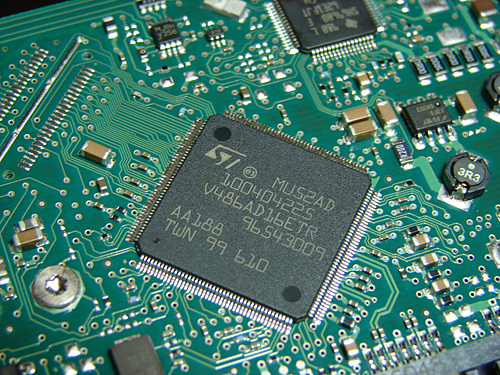 The PCB is openly visible on the bottom of the drive as in previous series and now contains an ST Micro controller chip. The ST Micro Serial ATA controller chipset is a departure for Seagate as they have previously used an Agere chipset. Our recently delivered Seagate 7200.9 500GB test unit is also employing the ST Micro chipset, so it appears this is a change for both drive series at this time. The 16 MB of cache memory is located on the opposite side of the PCB.


Seagate currently has 14 variations of the 7200.10 product series planned for release over the next few weeks, with select drives also being offered in the external Pushbutton Back-up Hard Drive line in late May or early June. The entire lineup features perpendicular recording technology with our review unit being the new high capacity model at 750GB. This is the industry's highest offered capacity in a single disk drive and is made possible by four 188GB platters spinning at 7200 RPM with a 16-megabyte buffer size.

Seagate is also introducing two new technologies in the 7200.10 products. The first is Adaptive Fly Height, and it maximizes the consistency of read/write performance across the entire disc by adjusting the fly height (distance between the disc head and platter) according to changes in environmental operating conditions. The second is Clean Sweep that assists in maintaining media integrity and drive reliability by passing the drive head over the entire platter during power-on to smooth out any irregularities in the disc surface.

A complete price list has not been published; however, Seagate says the 200GB model will retail at US $105 with the 750GB model currently offered for around US $500. Product launch has already occurred with the 750GB being widely available at online retailers, and the balance of the product line is expected within the next couple of weeks and at the brick and mortar outlets in late June.