I suppose that’s as good a segue as any into the Sensation’s display. It’s a 4.3” qHD (960x540) “Super LCD” display. As the displays editor in addition to smartphone editor here at AT, I have to admit that I’m granted an interesting perspective. On one hand, you have the traditional desktop LCD market, which is currently mid-stroke in a frenzied race to the bottom, and on the other, the new and emerging world of sub 10” mobile displays. Well, anything tablet sized and below.

I find myself more excited and concerned with mobile displays at any given time than desktop LCDs because that’s where everything exciting is going on. Further, it’s mobile displays where all the new innovation and competition is happening - Super LCD, AMOLED, Super AMOLED with and without Plus, qHD LCD, and qHD LCD with PenTile, all in just the last year! On the desktop side, it seems everyone wants to outdo each other at shaving another $20 off mediocre 1080P TN panels.

In the mobile game right now, you need to have some sort of non garden variety display on a flagship device, and more and more that means one of three things. Either you have to have a display that’s inordinately huge, has extremely high DPI, or is one of three AMOLED varieties.

If you remember, about a year ago HTC started marching down the AMOLED path. The Nexus One, then the Incredible, and Desire had first generation 3.7” AMOLED displays with PenTile. As things went on, availability constraints made the Incredible supplies scarce, and forced HTC to switch to Super LCD with the Desire. Depending on the content you spent most time looking at, the Super LCD Desire variant also got better battery life. I suspect that things are a bit more balanced with Android 2.3’s black-heavy theme, but back in the 2.1 days the Incredible and other AMOLED-topped displays ate battery. Since then, HTC has stuck to its guns with exclusively Super LCD displays, although they don’t underscore the Super part of that descriptor as much anymore. 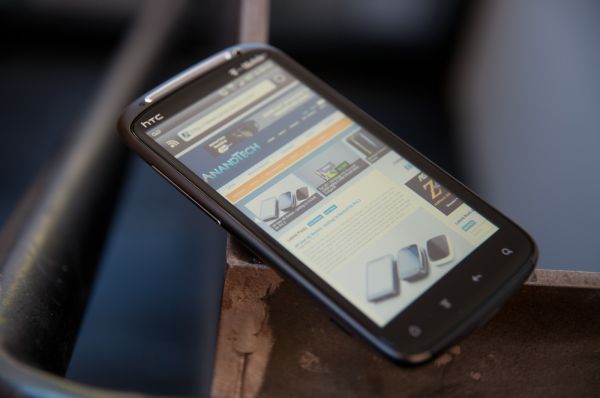 So what is Super LCD? Earlier I mistakenly stated that it was IPS - it’s actually a PVA derivative. So why PVA? Well, remember AMOLED’s strengths - excellent (completely off) blacks, extremely fast response times, and good viewing angles. It’s easy to nail the first and last with IPS, but I wager that HTC also wanted to eliminate any chance of smear, and went for S-LCD which (thanks to its PVA heritage) offers a nice balance of the three. In addition, the S-LCD panels use a traditional RGB (3 subpixel per pixel) stripe rendering layout, making it even better in some ways than the original AMOLED for things like web browsing and sharp-edged or one pixel thick UI elements. Panel types aside, S-LCD is good enough that it’s hard to tell apart from IPS. Right now the options are either to get WVGA with SAMOLED+ sans pentile, or qHD with an LCD. Soon we'll have a third option, Super AMOLED qHD but with pentile. I wonder what that'll be called - at this rate, perhaps Super AMOLED Extreme HD MAX?

So how does the Sensation’s qHD 4.3-incher stack up? I’d argue that it performs very well. First off are our usual charts where we report brightness (white and black) and resulting contrast measured using an i1 Pro at maximum brightness. 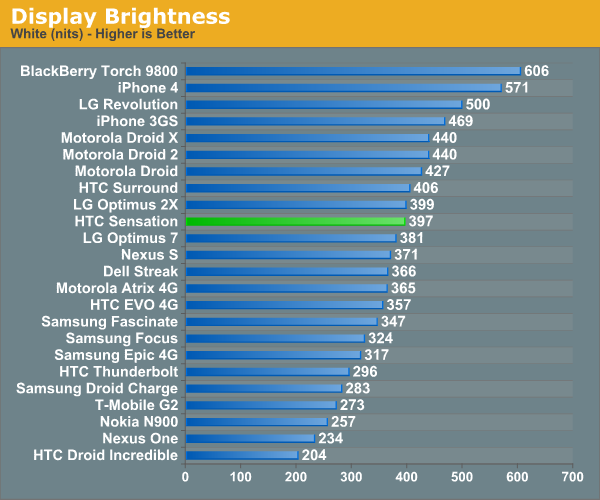 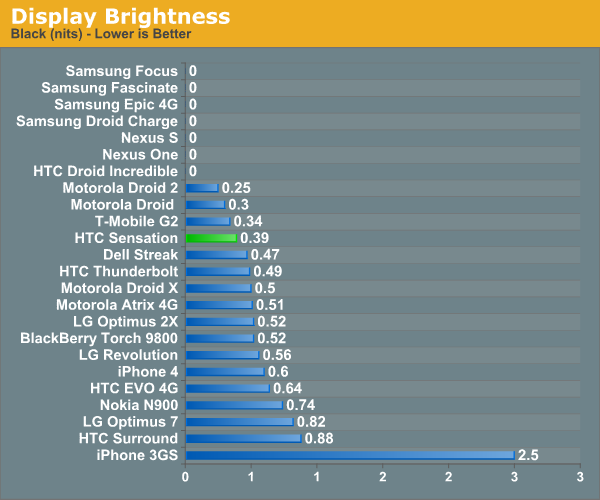 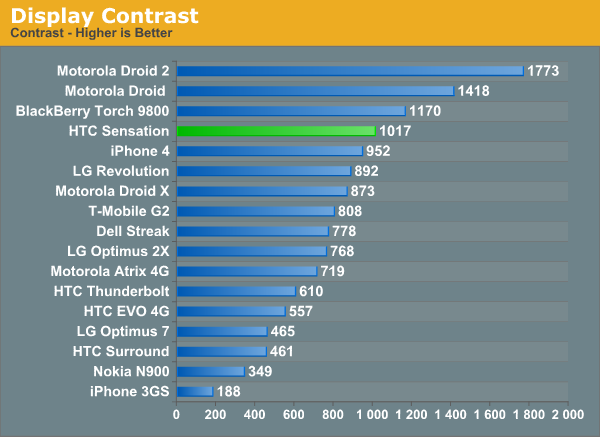 Here the Sensation is actually almost top of the charts when it comes to contrast and its blacks. It isn’t the brightest display at just short of 400 nits, but does very well in the tests. I suspect the Sensation could benefit from more brightness in general, but it isn’t a huge thing.

The previous charts are at maximum brightness, I also want to continue looking at how whites, blacks, and white point change across the brightness scale. To do this, we measure all three at steps of 25% on the brightness slider and create some graphs. 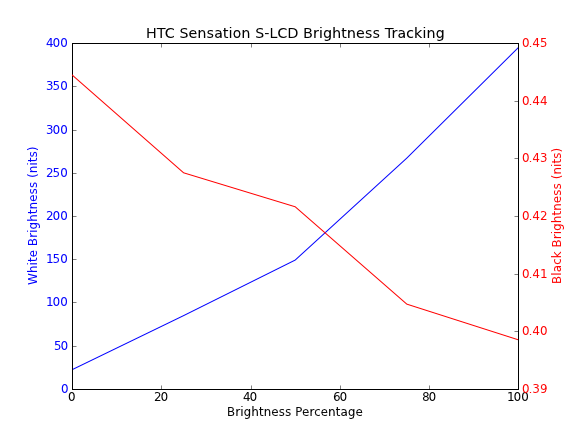 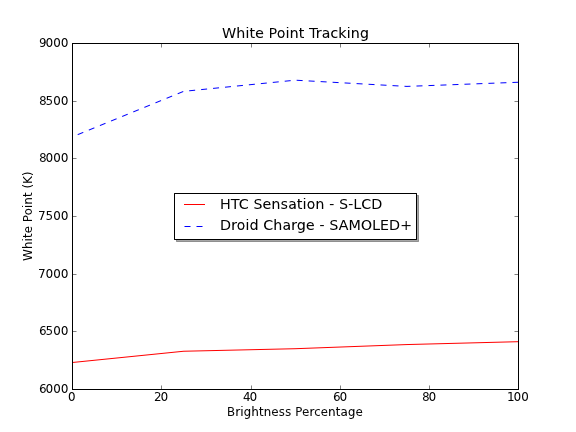 We’ve just started doing this, beginning with the Droid Charge, so we’re also learning here, but the HTC Sensation has some interesting behavior. Blacks strangely enough get better at maximum brightness by a small margin, and again we see that brightness for white is pretty close to linear. Where I’m very impressed with the Sensation is its white point, which is nearly 6500K at maximum brightness. Contrast that to Super AMOLED Plus, which we showed was up past 8000K (blue). 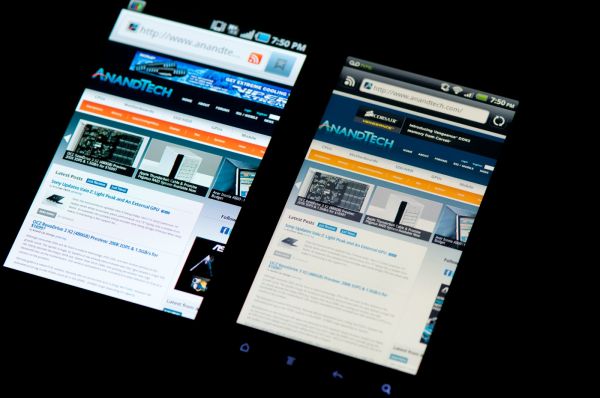 I’d say that mirrors my experience and what I see, especially because I end up pulling down tons of screenshots over ddms on my own calibrated display, and can simply compare side-by-side to the handset. When it comes to faithful color rendering, S-LCD is a clear winner. 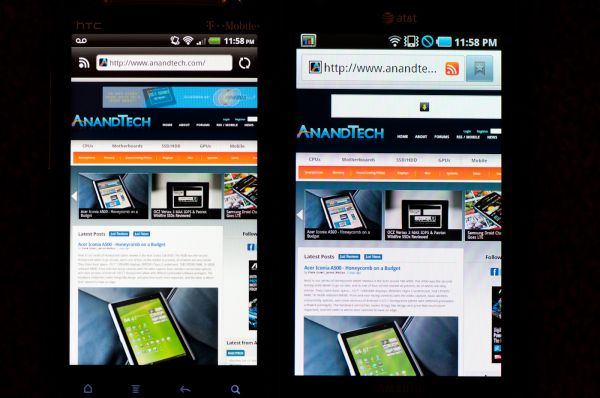 Side by side with another Super AMOLED Plus packing smartphone, the AT&T Infuse 4G (which we’re still working on), this is readily apparent. This is essentially a 0.2” bigger but completely comparable version of the Charge / Galaxy S 2 display. Here you can see that the Super AMOLED Plus panel looks bluer, and by comparison the Sensation a bit warmer. In addition, colors are more saturated on the Infuse.