OCZ's exclusive on the SF-2281 has finally lifted and now we're beginning to see an influx of second generation SandForce drives from other vendors. Make no mistake, although these drives may look different, have creative new names and different PCBs - they should all perform the same if you know what you're comparing.

Other companies are following suit. Asynchronous NAND is more readily available and cheaper, so don't be surprised to find it on drives. So far everyone seems to be following OCZ's footsteps and creating separate lines for the synchronous vs. asynchronous stuff.

The table below should break it down for you:

The four drives we're looking at today are a mixture of synchronous and asynchronous. The newly announced Patriot Pyro uses async NAND while everything else uses some form of synchronous Flash memory. OWC recently switched to using 32nm Toggle NAND in an effort to boost performance to OCZ MAX IOPS levels.

SandForce delivers firmware to all of its partners, however the schedules don't always match up. OCZ gets first dibs and renames its firmware to avoid direct comparisons to other drives. There are cases where OCZ may have some unique features in its firmwares but I don't believe that's the case with its latest revision.

Corsair and MemoRight do the same renaming, while the rest of the players stick to the default SandForce firmware version numbers. Everyone that shipped us drives seems to be sticking to either the latest firmware revision (3.20) or the one prior to it (3.19). Performance hasn't changed too much between all of these revisions, the majority of the modifications are there to squash this BSOD issue. 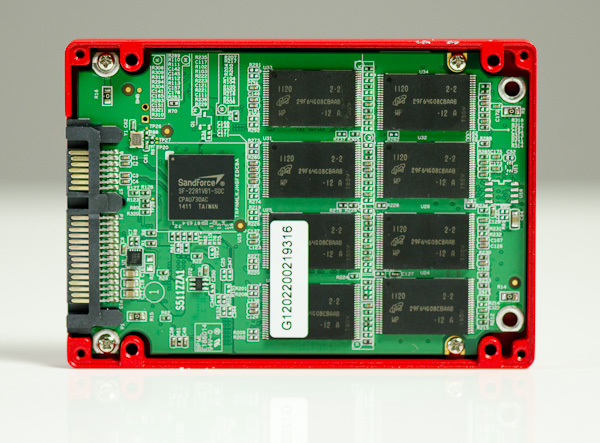 The Force GT is Corsair's answer to OCZ's Vertex 3. The GT ships with a custom PCB design and is outfitted with IMFT (Micron branded) NAND running in synchronous mode. The 120GB sample we were sent for review has 16 NAND packages each with one 8GB MLC NAND die. Corsair just released its first firmware update for the Force GT, bringing it up to version 1.3 in Corsair-speak. Given the timing of the release, I'm going to assume this is Corsair's rebrand of the SandForce 3.20 firmware.

The Force GT is the cheapest 120GB SF-2281 based drive with synchronous NAND in the roundup. The drive comes with a 3 year warranty from Corsair. 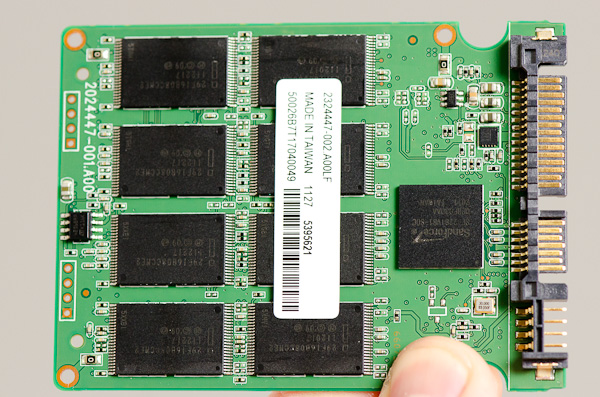 As Kingston's first SandForce SSD, the HyperX looks great. Although it doesn't really matter once you get it in the system, the HyperX enclosure has the most heft to it out of all of the SF-2281 drives we've reviewed. Part of the added weight comes from the two thermal pads that line the top and bottom of the case: 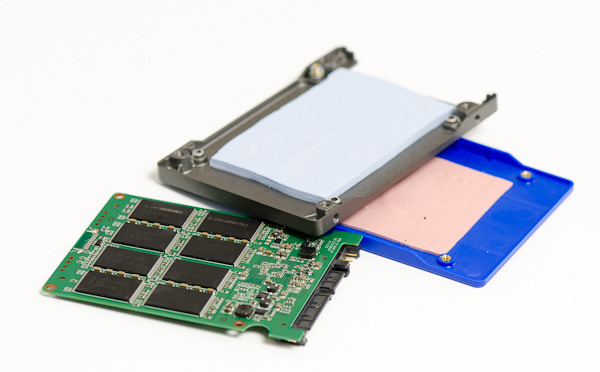 Kingston annoyingly uses 1.5mm hollow hex screws to keep the drive together, our biggest complaint from a physical standpoint. As a standalone drive the HyperX is our second most expensive here at $269.99 for 120GB.

The drive ships with a custom PCB and the latest SandForce firmware (3.20). Kingston sent along the upgrade kit which includes a 3.5" drive sled, USB enclosure, SATA cable and Kingston screwdriver: 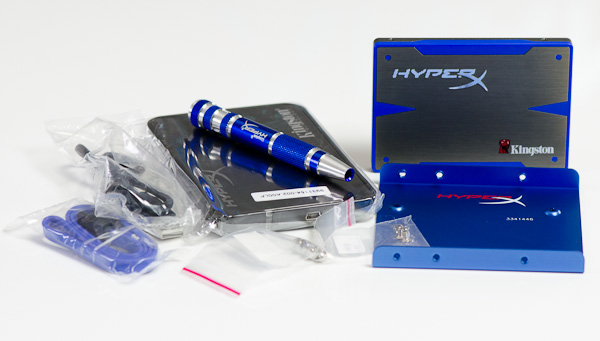 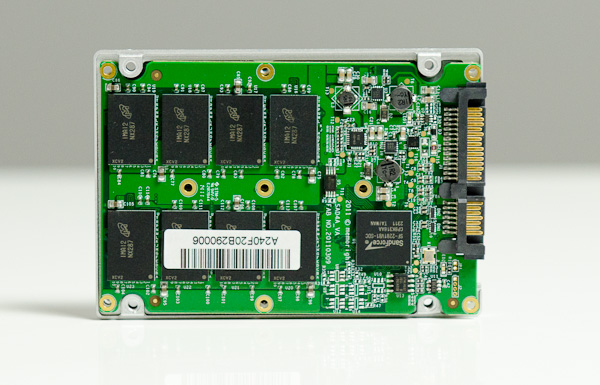 We haven't had a MemoRight drive in for review since the early days of SSDs on AnandTech. The FTM Plus is a vanilla SF-2281 drive with SandForce's 3.19 firmware. The PCB design is custom although the NAND configuration is pretty standard. We got a 240GB drive in for review with 16 NAND devices and two 8GB 25nm IMFT die per chip. 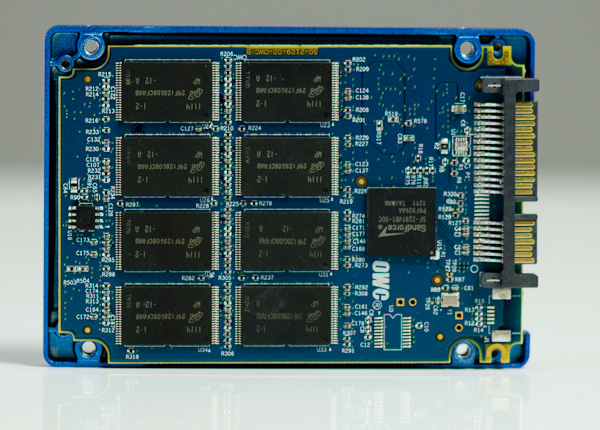 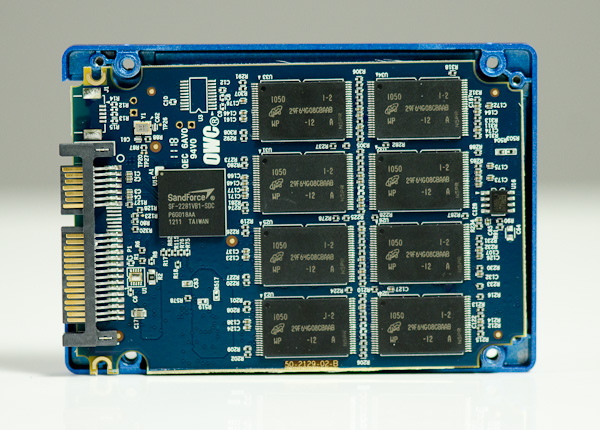 The last time we reviewed OWC's Mercury Extreme Pro 6G we were a bit surprised by the presence of a rework on a shipping SSD. Since then a couple of things have changed. For starters, the rework is gone as you can see from the images above. While these drives use standard 25nm IMFT synchronous NAND, OWC has recently switched over to 32nm Toggle NAND - giving the Mercury Extreme Pro 6G the same performance as the MAX IOPS drives from OCZ or the Patriot Wildfire. We don't have the Toggle NAND drives in yet but I'd expect performance similar to the MAX IOPS for the updated drives. The branding and pricing haven't changed, just the performance. 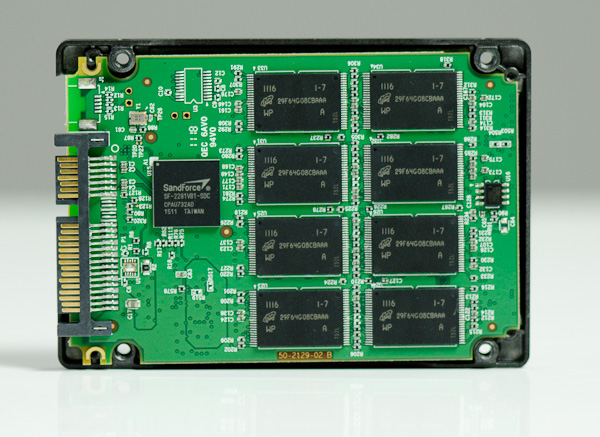 While the Wildfire is Patriot's high-end SF-2281 offering, the Pyro is its more cost effective solution. The Pyro's savings come courtesy of its asynchronous NAND, putting it on par with an Agility 3. The Wildfire by comparison is akin to OCZ's MAX IOPS drives. Patriot uses the same PCB layout as OWC. The drive ships with firmware revision 3.19 and a 3-year warranty.