One week ago, we wrote about HTC's launch of HTC Dev, its intent to release more components of its OpenSense SDK, and some of its plans for unlocking bootloaders on already released devices. True to its claims, HTC has released the bootloader unlocking tool for the international HTC Sensation today. 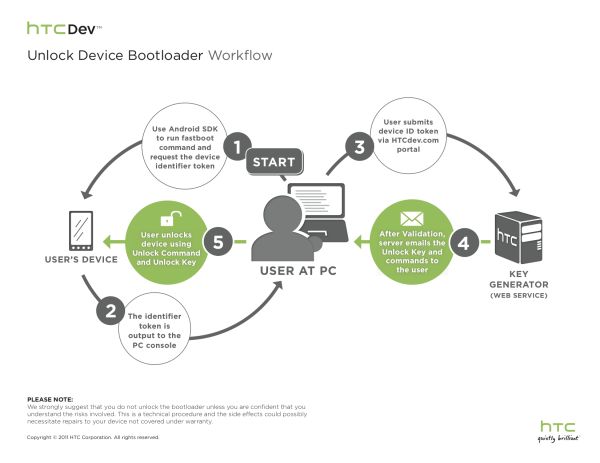 The workflow might seem a bit daunting at first given the diagram above, but it boils down to getting a token off of the individual device, then shipping that off to HTC so they can track unlocked devices when warranty status comes into question later. The token is no doubt some hash of identifiers unique to the phone being unlocked - possibly a hash of IMEI, serial, or others. HTC's servers then generate a key based on the device token, which the bootloader accepts and unlocks itself with. HTC has more details about the process at its website.

Currently the tool only works with the international version of the HTC Sensation, though the EVO 3D on Sprint and T-Mobile US HTC Sensation are listed alongside as devices which will get official unlocks as well.