The Motorola Droid Bionic, like the Droid 3, uses a TI WL1285 wireless combo for WLAN, Bluetooth, and an FM radio, were the Bionic to have an application for it. WiFi range on the Bionic is totally adequate, I can find nothing to fault with this, and we’ve pointed out where the WLAN antenna is on the device. Things are pretty standard here, the Bionic does a good job hopping on and off of my 2.4 GHz 802.11n network, and with my 20 MHz channels I see a link speed of 65 Mbps, which indicates long guard intervals. 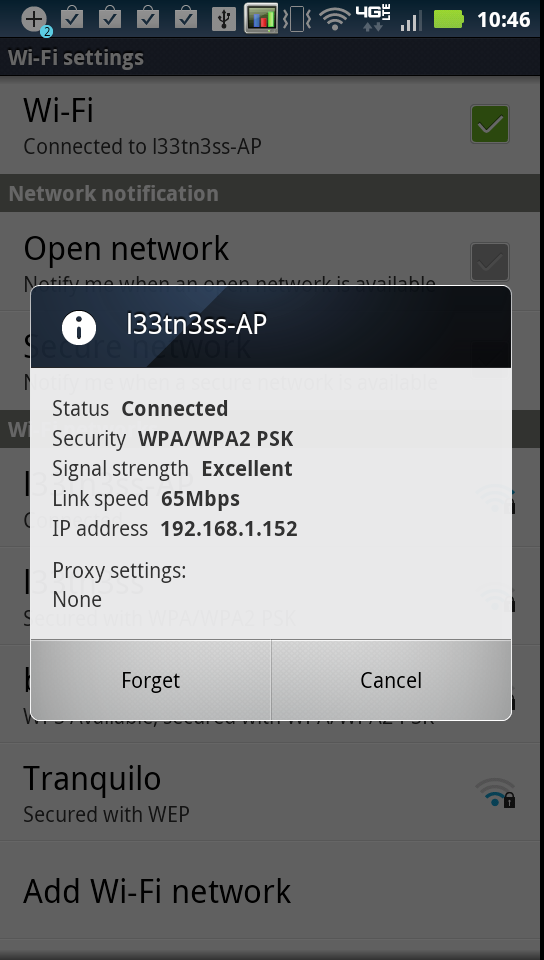 I did the usual thing and ran our local WLAN test which consists of downloading a locally-stored 100+ MB PDF and measuring throughput. 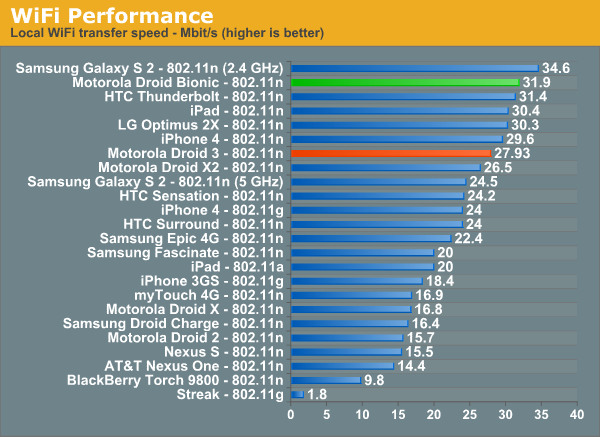 Performance here is on par with and slightly better than the Droid 3.

The Bionic also includes the requisite WiFi hotspot functionality you’d expect from a top tier smartphone. There are a maximum of five allowed wireless clients that can attach at a time. The software configuration thankfully also allows users to choose what wireless channel the hotspot sits on, and the DHCP server pool’s starting address. You can use WPA2 PSK or no encryption at all. 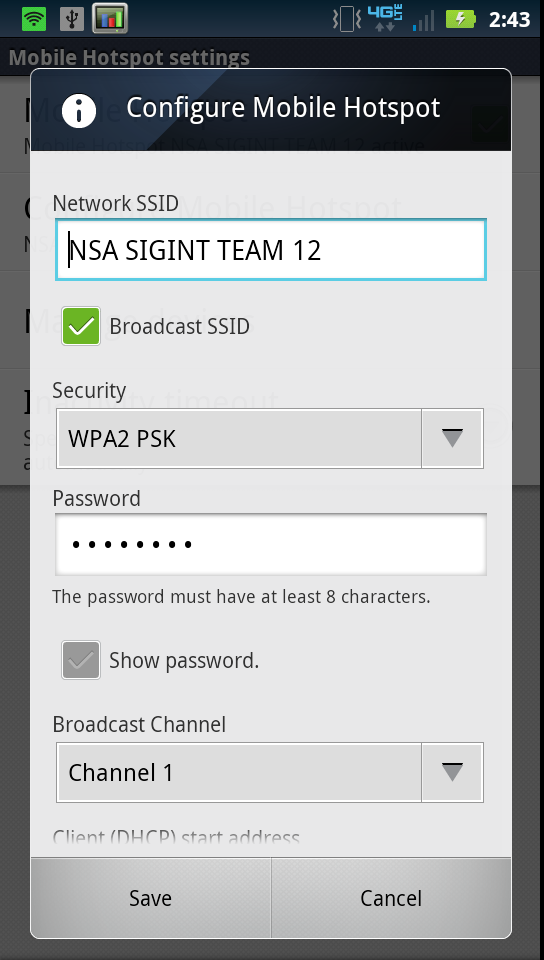 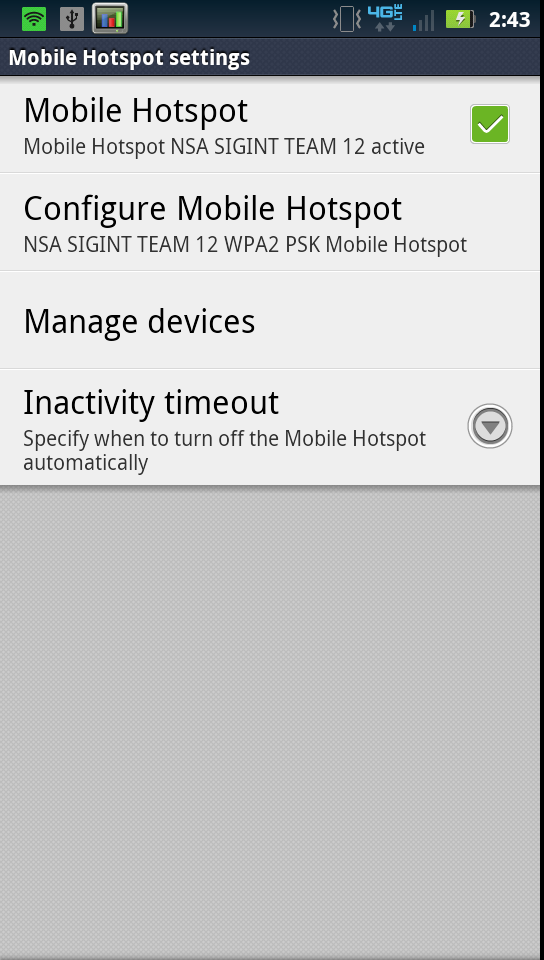 Clients attach and negotiate an 802.11g 54 Mbps link rate at maximum. I did have some initial stability problems with the Bionic when running our WiFi hotspot test, which I eventually tracked again to data saver during those night hours. Other than that, the hotspot works decently well. Just keep in mind that even connected to the charger, heavy WiFi hotspot use can discharge the phone slowly.

The Bionic uses Qualcomm’s GPSOne onboard MDM6600 and locks very fast and accurately, even indoors. Since Qualcomm’s GPS seems to be somewhat further abstracted away than most, I have a feeling every fix is warm rather than cold which helps speed things along considerably. 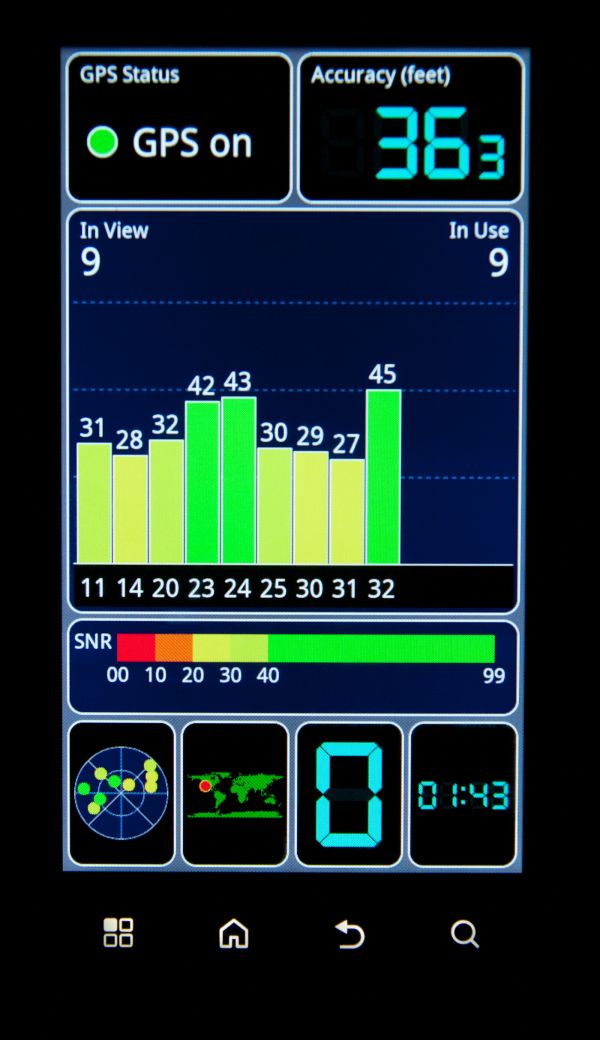 I’m impressed with the speed and robustness of the GPS on the Bionic it’s largely the same that I saw on the Droid 3.

The Bionic, just like the Droid 3, has a total of three microphones. Two on the back of the device, one at the top, one at the bottom, and on the front, the primary microphone at the bottom. The Bionic, like the Droid 3, does some common mode noise rejection to reduce ambient noise when on calls, the result is that the other party in theory hears less background noise even if you’re in a noisy environment.

The Bionic performs about as well as the Droid 3, doing a good job filtering out background music when in close proximity to a speaker. I’ve recorded a sample showing this behavior the same way we’ve done before - I increase the volume, then decrease it, while talking, and record on another phone connected to line-in. I subjectively remember the Droid 3 doing a bit of a better job, but I have little doubt the Bionic uses the same solution, though I’m not sure whose IP this is.

Actual in-call audio is the same as well, I found the Bionic handset pleasing and decently loud. The Bionic does a good job making EVRC voice (which is what Verizon uses by default) sound actually pretty decent, and the earpiece doesn’t saturate or crackle at maximum volume. I’ve also recorded another sample with the Bionic calling the local ASOS.

The Bionic’s weak point is audio quality for listening to music. I’m still working with Francois to build out our audio testing suite. Unfortunately the Bionic’s main problem is blatant enough to be audible without doing objective testing. Just like the Galaxy S 2, the Bionic exhibits background hiss and whine that seems to be reflective of CPU frequency and current power draw. I’ve recorded a sample of this background whine that happens whenever the audio codec is on. You can hear the frequency of that background hiss change as I run a speedtest and keep the LTE radio active. It’s unfortunate because this is one of those - once you notice it, you can’t un-notice it - annoyances that really makes listening with sensitive in-ear monitors annoying.

The Bionic, just like the Droid 3, uses ST-E’s 3.1 CPCAP which is a combination PMIC, audio codec, and really an integrated solution for system management. I don’t have much hope for this being remedied with an external headset amplifier, as just like SGS2 you end up amplifying noise that exists even at 1/10 or 2/10 volume settings.

Speakerphone on the Bionic is supplied courtesy of what’s under that grille on the back in the lower left. The Bionic doesn’t saturate at maximum volume, but doesn’t go particularly loud either. Volume is very close to the Droid 3. 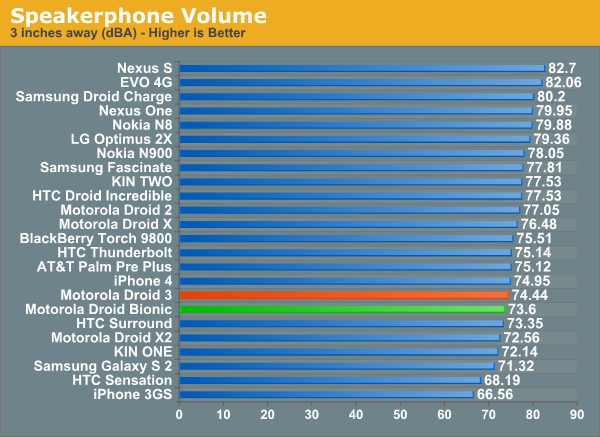