In and Around the Lian Li PC-A05FN

From reading the comments on past reviews, it seems like the overwhelming majority of you vastly prefer enclosures that look more classy and austere than flashier designs. While there's certainly a place for some of those (and I adored the gaudy fire engine red NZXT Phantom 410 we recently reviewed), the overarching theme is that people want an enclosure that reminds them of the monolith from 2001: A Space Odyssey. Lian Li seems to have delivered for the most part on that front with the PC-A05FN; you can get it in silver or black, but it's always going to have the head-to-toe brushed aluminum finish. 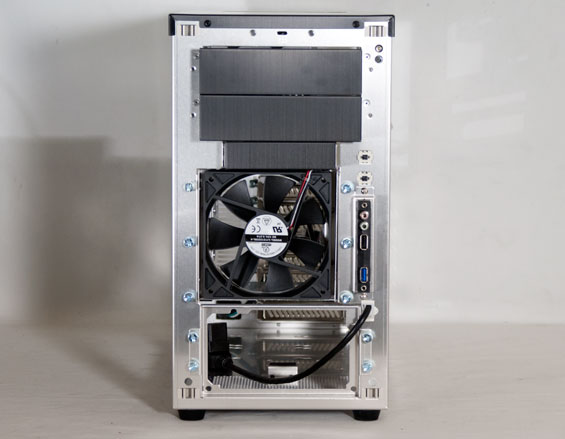 It's definitely an attractive piece of kit, but be warned: the black brushed aluminum is going to pick up fingerprints and smudges. That said, the front of the enclosure is pretty much where all the action happens: there's a pair of 5.25" external bays, a single 3.5" external bay, power and reset buttons, audio jacks, and then singles of USB 2.0 and USB 3.0 ports. These last two are unusual, since there's only one internal connector serving both ports, and that connector is USB 3.0.

The top of the PC-A05FN features a sealed off mount for a 140mm fan; you can remove the aluminum plate and install one internally (and there's space for it), or leave it in and enjoy a remarkably seamless top finish that gives Fractal Design's Define R3 a run for its money. When you swing around to the back is when things are going to start to seem strange: there's no power supply mount, just the I/O cluster, eight expansion slots, and then an AC adaptor plug. 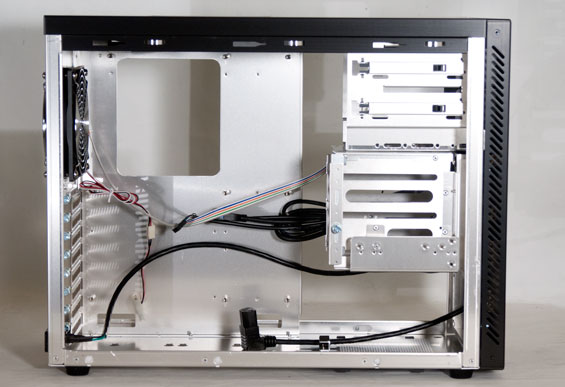 Opening up the enclosure reveals the answer to these mysteries: Lian Li opts to mount the power supply at the front of the case and then route the cable to the front. You can also see how the cooling is fundamentally designed: the rear fan is an intake instead of an exhaust, while the front fan is the exhaust. This looks potentially better for keeping the CPU cool, but at the cost of getting fresh air to the video card(s). For that, we're pretty much hoping the air coming in from the back vents will be enough, but it stands to reason a multi-GPU configuration inside of the PC-A05FN is probably ill-advised.

Overall I found the design of the PC-A05FN interesting, but with some reservations. Much like the last Lian Li case we reviewed, the PC-TU200, I'm left feeling more of that "just because you can doesn't mean you should" kind of vibe in relation to the design decisions. Lian Li has added some allowances for tool-less assembly (like the snapping clips for the 5.25" drive bays), so hopefully assembly will at least go a little more smoothly than the previous Lian Li cases we've tested.