Virtualized or Not? We've Got Numbers

We have had epic discussions with quite a few readers about the importance of virtualization in our reviews. In our six-core Opteron review we wrote:

"Let there be no misunderstanding: how well a new Server CPU handles virtualization determines whether it is a wallflower or a blockbuster."

Even back in 2008, IDC expected that 52% of the servers would be used for virtualization, but in other reports the numbers were significantly lower. For example, more recently (April 2011) IDC reported that about 20% of all newly purchased servers are used in virtualized environments. No doubt there is some confusion between buying a server for virtualization and the numbers of workloads that find a home in a VM. IDC reports (Dec 2010) that more than 70% of applications are running inside a VM, but there is more.

Not convinced yet? Well, luckily for us Canonical did a survey among 6000 (!) users of Ubuntu Server. Interestingly, 50% of the respondents stated that they use Ubuntu server as a guest OS inside a VM, in other words it runs virtualized. Although this is only a (small) part of the total server market, it is another datapoint that gives us an idea what these Opteron and Xeon boxes are used for. 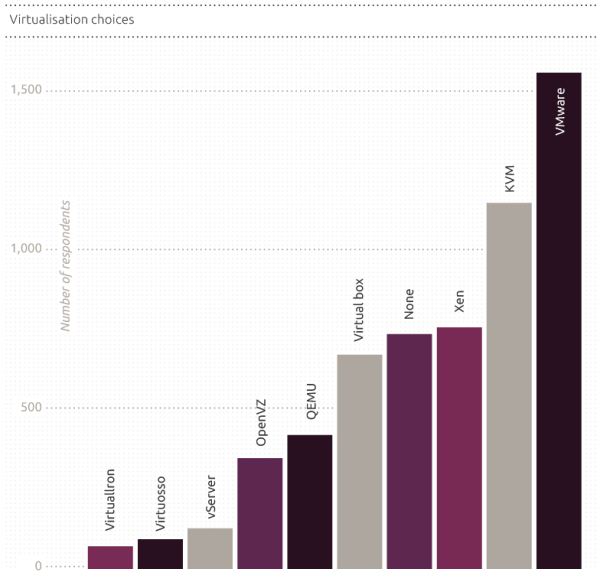 Interestingly, VMware and not Xen or KVM are the most used hypervisors. To summarize, the percentage of servers bought for virtualization reported by IDC and others are heavily influenced by Google and other "Cloud" buyers. We suspect that a much higher percentage (than the quoted 30%) of the server buyers among our readers consider the virtualized benchmarks as the most important ones.