Surface is very well built and extremely well designed. It’s easily among the best built products I’ve had the opportunity to handle, and definitely puts a lot of earlier attempts from far more experienced companies to shame. I wouldn’t say that it looks better or worse than the iPad, it’s simply different. I talked about perspectives earlier, Microsoft’s perspective on tablets is a bit more utilitarian than Apple’s and Surface’s design reflects that reality.

Where the iPad is curvy and without any IO expansion, Surface is squared off with 22-degree beveled edges. The iPad features a light aluminum finish while Surface contrasts with its dark Magnesium surface. Not better or worse, just different.

Surface is both larger and heavier than the iPad, both design decisions on Microsoft’s part to built a device that could better deal with Windows RT’s multitasking capabilities as well as make room for a comfortable typing area when used with one of its two keyboard covers. 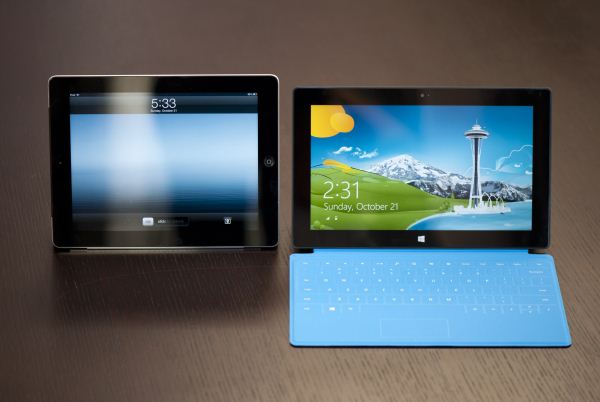 The added weight is offset by superb internal weight distribution. Microsoft claims a lower moment of inertia by more evenly distributing weight inside Surface’s chassis. I don’t know that I’d consider Surface light but it is very comfortable to carry around. It’s not quite like porting around a pad of paper, but carrying Surface feels very natural.

The focus on weight distribution results in a device that is honestly comfortable to hold in tablet mode and very comfortable to carry around. The more squared design of Surface actually makes in hand feel more like a book than the iPad, which was an early goal for the device. 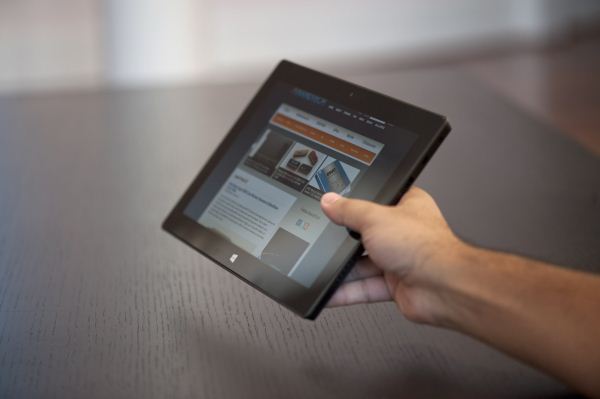 The chassis is built out of an injection molded Magnesium, which gives it a very different feel to most machined Aluminum or plastic tablets we’ve used in the past. Microsoft calls this process VaporMg (vapor-mag) and I have to say that I’m pleased with the outcome. Surface’s finish is smooth and lacks the same texture that we’ve come to expect from machined Aluminum. The device feels very durable and doesn’t seem to scratch or scuff easily, although I didn’t purposefully try to mar my review unit over the past week. Striking a balance between robustness and light weight is very tricky business when building mobile devices, Surface easily falls on the robust side of the scale without feeling overly heavy. I never felt that the device was too fragile.

The power of Surface is in its flexibility. Microsoft’s talents not as a software developer nor as a parts assembler are what make Surface great here, rather its design and manufacturing intuition. I would’ve expected Surface to come from a company that had much more experience in designing and building tablets and PCs, not from a company that’s traditionally known for putting stickers all over them.

Surface’s flexibility comes from three areas: the tablet itself, the integrated kickstand and the optional Touch/Type covers. In tablet mode, Surface is Microsoft’s take on the new wave of tablets. It delivers the same intimate content consumption experience that you’d get from other tablets but with the added benefits of Windows RT, such as improved multitasking and better task switching.

Surface also features an integrated kickstand, also made out of the same VaporMg process as the rest of the chassis. 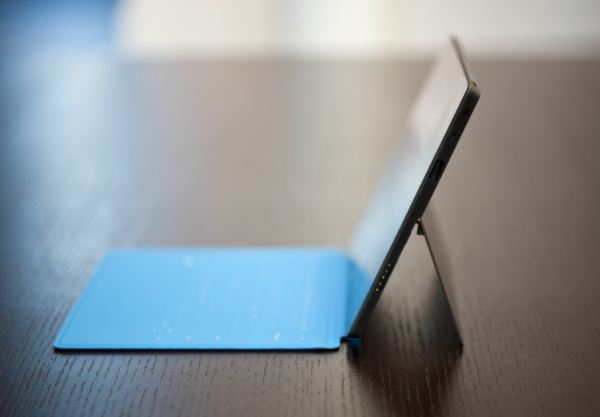 Microsoft wants you to be able to quickly transition between notebook, tablet and display modes. It’s rare that I see a goal so well executed. Surface really masters the art of quick transitions between all three modes. I can be in word, typing out this review and quickly switch to a tablet mode where I’m browsing the web with the keyboard cover folded neatly behind the display. If I need to respond to a comment or answer an email, I can just as easily switch back. The kickstand is a necessary part of enabling these quick transitions, and it does its job well.

There’s only one side of Surface that has a cutout for you to easily flick the stand out from its resting place. The kickstand’s range of motion does take some getting used to. It’s spring loaded enough to pop out at good velocity (and strong enough to pinch your skin nicely if you close it on a part of your finger by accident). When deployed it positions the top of Surface away from you at a 22-degree angle, matching the bevel of Surface’s edge.

With a fixed angle of deployment the kickstand doesn’t always deliver the best viewing experience, although it’s usually good enough. The kickstand is perfect for desk use and even for using while reclined on a couch or even in bed. Where it does fall short is if you’re hunched over Surface on an airplane in coach without a lot of room to move the device away from you. In those situations you’re going to find that you’d wish the kickstand could open at a wider angle.

Microsoft is particularly proud of the acoustics and feel of the kickstand. In my experience I felt the kickstand actuated nicely but I don’t know if I’d go so far as to draw the luxury car door comparison. The best way I can put it is the kickstand never feels cheap and doesn’t rattle, it works and gives you the confidence that it’ll always work and not just break after half a year. It’s not often that I find a substantial moving part on a mobile device that I feel is more functional than gimmicky. Surface’s kickstand is definitely a job well done.

The third element of Surface that makes it a very flexible device is also responsible for the splash of color in the design that gives the otherwise business appearance a consumer twist. I’m talking about Surface’s Type and Touch Covers.