The most amusing thing about the different Cherry MX mechanical switches is the subtle differences between the ones that aren't Blue. Our review unit features Cherry MX Browns, and these are going to be noticeably quieter than the Blues. They're still more tactile compared to the Reds and the Blacks (which are both more popular for gaming keyboards), but not quite as clicky as the Blues.

For basic productivity tasks I've noticed that the Browns in the Rosewill Illuminated Gaming Keyboard feel very different than the ones used in Logitech's G710+ keyboard. Logitech employed some extra tricks to reduce noise, but in the process the feedback from the keys actually felt like there was a bit more reverberation to it. I tend to beat my keyboards like they owe me money, and the G710+ became pretty painful to use in a hurry as I felt the reverberation in my wrists.

By comparison, Rosewill pretty much just lets the Brown switches be what they are, and the result is a much more fluid typing experience. These are definitely softer switches than the Blues in every respect, but they're very enjoyable to type on and I'd almost argue they're second to the Blues for that purpose. Any mechanical switch is typically going to be more pleasing to use than a membrane-style keyboard, but the Browns may be more ideal for people who like the feel of the Blues but either don't want or can't deal with the noise. 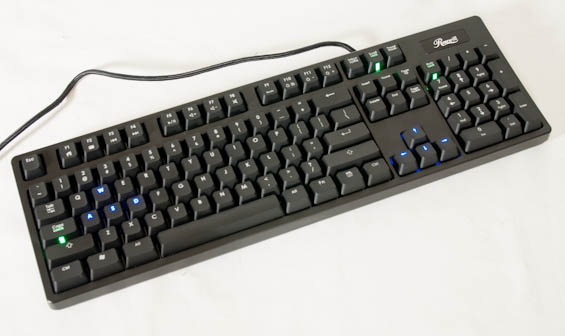 I also really like the treatment Rosewill uses for the keycaps on this keyboard as well as the size of the keycaps themselves. The G710+ felt slightly oddly spaced, either as if the keycaps themselves were too narrow or the keys were too far apart. Rosewill's design doesn't suffer from that issue. I wish they'd included a wrist rest (hell I wish they'd include a wrist rest on all of their keyboards), but for what it's worth, the RK-9100BR is pleasant enough to type on. They get the fundamentals right.

In being a slight jump from the Cherry MX Blue switches in typing and productivity, the Brown switches used in the RK-9100BR also lend themselves a bit better to gaming. I did a quick run in my woeful Centurion in MechWarrior Online (now in open beta!) and didn't feel myself really fighting with the keyboard so much as the fact that the Centurion is a terrible mech.

The reason is that while the Browns actuate in the same manner as the Blues, they require a bit less pressure, which will feel like slightly less travel. These still aren't ideal for gaming (for that, you really want Reds or Blacks), but it's definitely an improvement over the actuation force the Blues require.