Provided you're at least prepared for it, assembling a system inside the Rosewill Line-M can actually be a fairly simple experience. Since it's such a small case and such a direct design, assembly is actually pretty self-explanatory. What you want to do is make sure you assemble things in the right order.

The first thing to go in is the motherboard, and Rosewill demonstrates why I'm starting to seriously bristle when manufacturers don't make some kind of allowance for motherboard installation. Despite being an inexpensive case, the Line-M comes with the motherboard stand-offs pre-installed. Snapping in the I/O shield was easy enough, but you'll have to tilt the board into the case if you're using a full-sized Micro-ATX board, as the drive cage overhangs the tray just a little. This also unfortunately makes one of the screws very difficult to install. 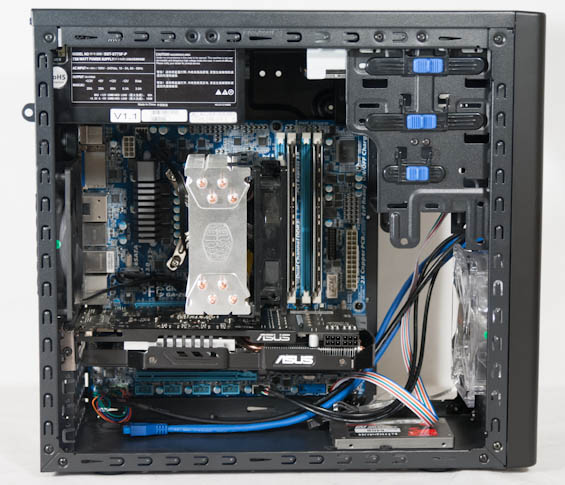 Next you'll want to install the optical drive and the storage drives, as they're most liable to get buried under cables. The 5.25" bays employ a toolless clamp on the left side that's actually very effective, but you need to snap the front fascia off first. From there, just take the shield off and slide the optical drive in. The single 2.5" drive mounting point is just that, and not a bay. In the bottom floor of the case are four holes for screws to bottom-mount the drive. It's not ideal but it does get the job done.

Expansion cards go in next, and the power supply goes in last. There are no expansion slot covers; the slots themselves have perforated metal that pops out, which is common with cases in this price bracket. Despite the fact that this is a budget case, it does benefit tremendously from a modular power supply. Modular power supplies aren't hard to get anymore; Corsair sells one for $50 that would be well-suited to the Line-M, but I must stress that you really are limited to 160mm of PSU depth unless you eschew using the 5.25" bays entirely. 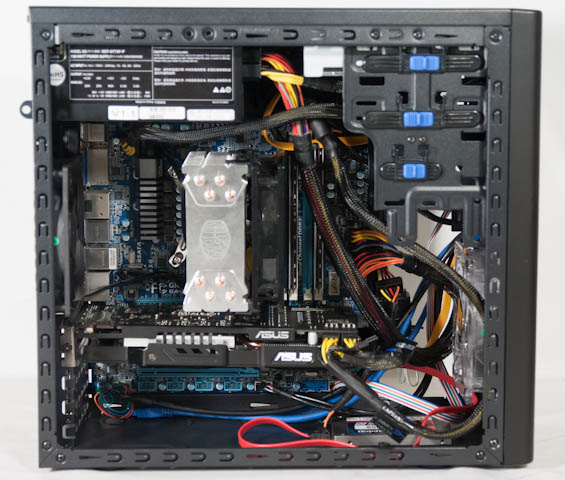 Cabling the Line-M is the most complicated part, due primarily to the limited space, lack of space behind the motherboard tray, and open fan blades of the front intake fan. I was able to do a messy job but nonetheless keep everything out of harm's way when assembling our testbed; there's really no way to not do a messy job with this case, though, so keep that in mind. Small cases are rarely clean.

The Rosewill Line-M actually isn't too difficult to assemble, and as far as servicing it goes, the worst part will probably be navigating the cable spaghetti (something a modular power supply helps mitigate tremendously.) I think I would've preferred some means of mounting the SSD up near the rest of the drives, though, as stretching the single SATA power lead down to the bottom of the case seems to needlessly complicate things.