Software setup on the Chromecast is simple and essentially out of band. When first plugged in, the Chromecast will form a wireless network of its own, the apps use WiFi AP discovery on the respective platforms, attach, set them up, then return you to the network you were attached to before. 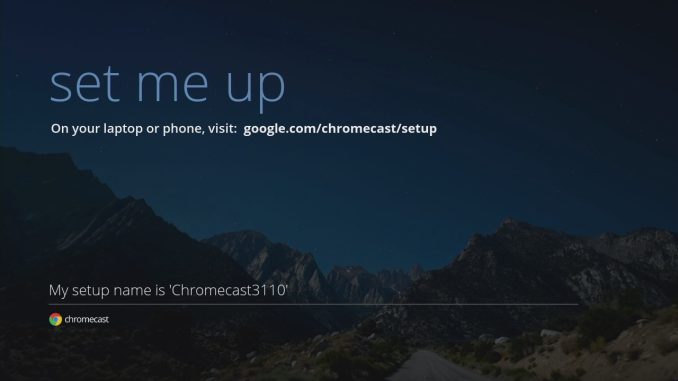 Using the Android app is simplest, since the app then searches for networks, joins the Chromecast network, and lets you attach it to a network of your choice, enter the wireless credentials, and name it. The desktop apps work the same way – On OS X for example the app will automatically pull down the list of nearby networks, change wireless networks, program the Chromecast, then change back. This semi out-of-band pairing is so much better than forcing the user to tediously enter a password over a remote control, especially if you’ve chosen a secure wireless PSK with a lot of characters. Using the desktop or Android setup apps have worked flawlessly for me thus far.

One big use case for a lot of people (including myself) will be using the Chromecast while traveling. If the Chromecast doesn’t find the network you’ve previously attached it to, it goes into the beaconing mode and you’ll have to use setup again. Of course, if you’re in a hotel, that means you’ll need to join the Chromecast to a portable hotspot, the lack of any onboard browser means you’ll get stuck at the captive portal unless you clone your MAC address on a laptop, authenticate, then switch back. The travel use case works, it’s just subject to the same caveats that normally apply. 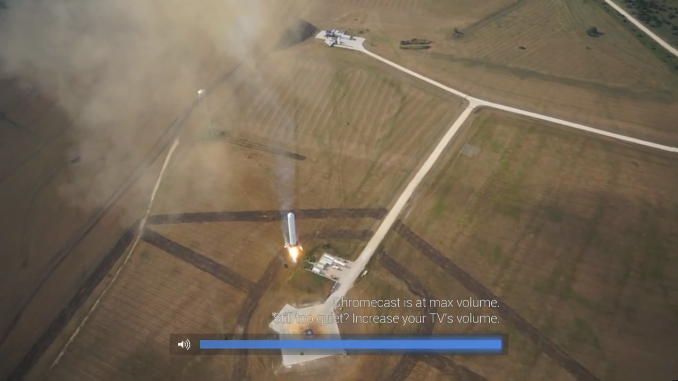 Chromecast also supports HDMI CEC (Consumer Electronic Control) and can turn on equipment and switch inputs to the appropriate one. I believe volume is a part of CEC as well, but that’s not supported, changing volume results in a bar popping up on-screen from the Chromecast.

The First of Two Modes

Chromecast offers two modes of operation – local streaming of the contents of a tab from chrome (encoded on the computer and sent over the network to the Chromecast directly), or the cloud to Chromecast playback of some URI. The first mode works only in Chrome right now with an extension that you’ll need to control YouTube, and Netflix from the browser on either PC, OS X, or the Chromebook Pixel. The only requirement is that Chromecast is on the same network you’re attached to. 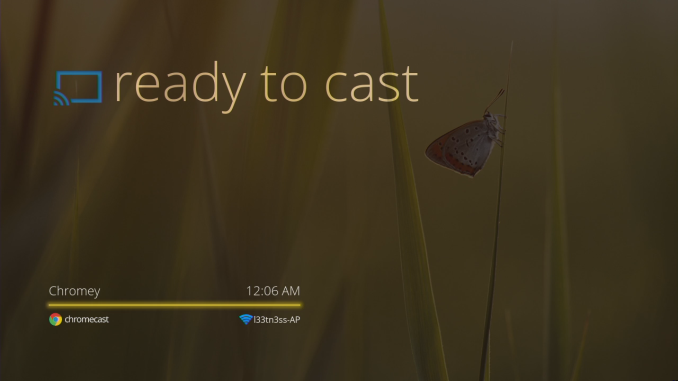 When not casting, the Chromecast displays a simple ready to cast screen with the wireless network it is attached to, signal level, name, and backgrounds that cycle through 11 photos constantly. The iconography on the display moves around as well to prevent any burn in from happening. Chromecast is operated without a remote, all of the playback controls are exposed in the respective players.

The Chrome extension adds a Cast button to the YouTube player that lets you shoot a video over to it. It works flawlessly, there’s a list of the Chromecasts and tapping on one quickly makes the video play on it. Scrubbing through playback works, as does volume. One thing that’s missing from the desktop YouTube client is the ability to modify or add to the playback queue, you can only interrupt playback and immediately start playing a new video.

In Netflix on the desktop, you get a Cast button at bottom right whose functionality works the same way as it does in YouTube. Unlike YouTube however, after playback starts you can’t leave, you need to have the tab open somewhere for Netflix playback to continue if you’ve initiated it from the desktop. Scrubbing and subtitles work, but volume control doesn’t. Inexplicably the other Google Play services aren’t yet available from the web/desktop, like Google Play movies or music, though I can only assume they’re coming soon.

It’s obvious to me that the preferred interaction method is from the mobile apps, where there’s better support for the first party Google services – Netflix, YouTube, and Google Play.

Netflix on mobile works essentially how it does on the web player. There’s a cast button, and you can scrub through and control volume. On Android, the playback controls are also elevated above the lock screen thankfully, so it’s reasonable to the smartphone as your remote control.

YouTube playlists work only on smartphone and tablet, where you can add movies to a queue. The Cast button appears in YouTube and there’s a selection menu. Scrubbing through videos works, and there’s that add to queue button in the right places. YouTube control works well – it’s responsive and speedy. Google Play music and movies also get Cast buttons and have working scrubbing and volume control.

YouTube and Netflix both have the progressive quality feature enabled, and the Chromecast steps up through quality rather quickly for me, all the way to the maximum bitrates for each service. On Netflix, that’s up to the 1080p “Super HD” bitrate stream with 5.1 audio, which does work on the Chromecast. As far as I’m aware, that makes the Chromecast as of this writing the least expensive Super HD enabled Netflix player alone. On YouTube I suspect the VP8 streams are being used, and quality is likewise excellent.

At present the Chromecast is limited to just Google and Netflix (unless you use the Chrome tab, more on that in a second), however Google published a Cast SDK for developers to build functionality into their own services. Getting the Chromecast functionality working requires a sender (which discovers the Chromecasts, handles most of the work for status and controls), and receiver (which in the Cast SDK is a web app that gets launched and pulls down media and receives notifications).

Hopefully additional services like Spotify, Pandora, Vimeo, and maybe even games will leverage this and add Cast support.