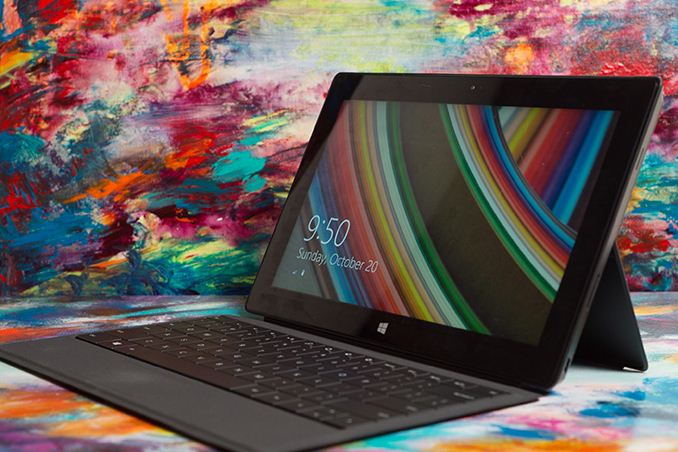 Shortly after general availability of the Surface Pro 2, Microsoft pushed out a firmware update that allowed the Marvell WiFi solution to drive down to even lower power states. I spoke with Microsoft after the update went live and immediately re-ran both of our battery life benchmarks on the Surface Pro 2. The improvement is significant.

As a recap, both of our battery life tests are run with the displays calibrated to 200 nits and running a fixed workload. A faster system doesn't mean more repetitions of a workload, just that the system enjoys more time idle.

The web browsing benchmark cycles through a series of desktop web pages at an aggressive interval until the battery dies. 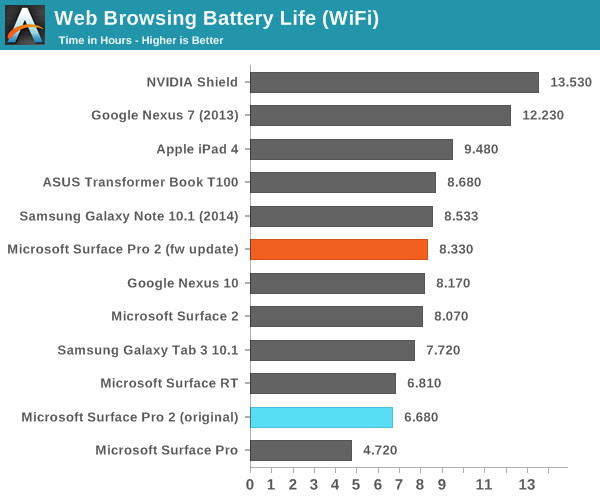 In our web browsing battery life test, Surface Pro 2 now manages better battery life than Surface 2. Microsoft told me that their internal target was over 8 hours, and this firmware update brings it up to snuff via a nearly 25% increase in battery life.

Video playback also sees a boost since I test with WiFi enabled and connected to an active AP. Here we're playing back a rip I made of the last Harry Potter movie. It's a 720p 4Mbps high-profile H.264 video: 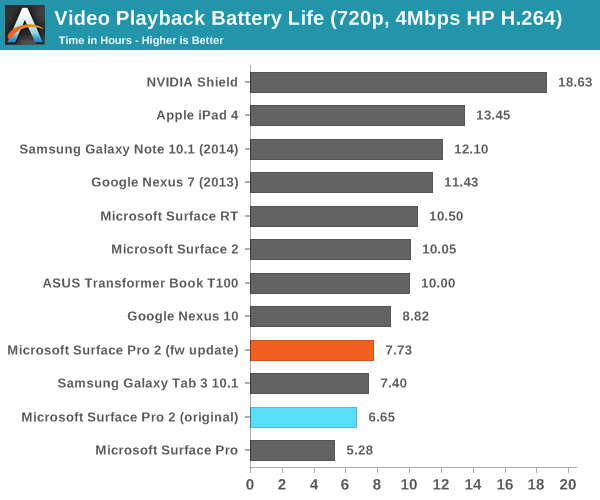 Haswell's video playback still doesn't seem all that power efficient. I've heard a rumor that this gets fixed in Broadwell though. The improvement on the video playback side is still reasonable at 16% over the numbers I originally ran.

A software update also rolled back the Surface Pro 2's video drivers to an earlier version that seems to have fixed the display corruption on wake issue as well. If you're wondering, Surface 2 didn't receive any similar battery life changing firmware update.

I chatted with Microsoft a bit about why Surface Pro 2 can't seem to deliver the same battery life in these tests as a 2013 MacBook Air. They correctly pointed to the litany of sensors included in Surface Pro 2, as well as the higher resolution display, active digitizer and capacitive touch all of which increase power draw over the MBA. While it's still true that we run into a lot of poorly optimized Windows notebooks as far as battery life is concerned, Jarred recently reviewed the new Sony VAIO Pro 13 that is a clear exception. 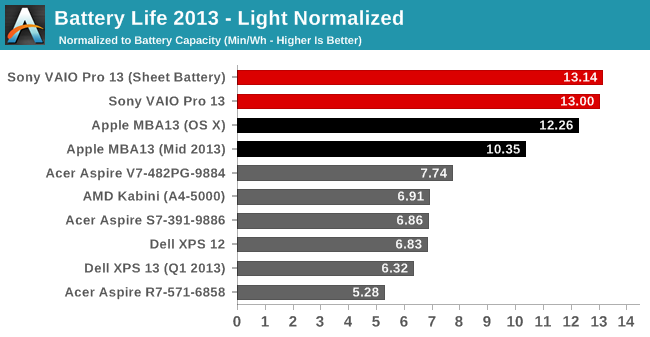 The VAIO Pro 13 is, for the first time in my memory, able to equal Apple's idle power efficiency if you normalize for battery capacity. The 2013 MBAs still managed to be more efficient under heavier workloads, but Sony at least showed it was possible to close the idle power gap.