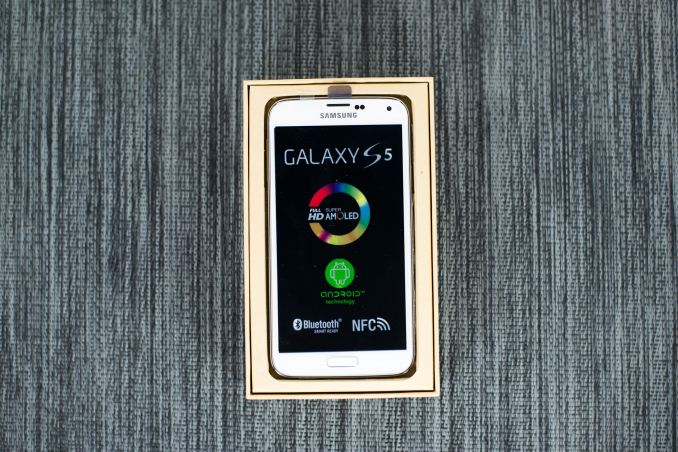 Samsung is now the undisputed king of the Android smartphone space. It was only a few years ago that the general public referred to every Android phone as a “Droid”. Now, it’s not uncommon for people to refer to every Android device as a “Galaxy”, and it speaks to the level of market penetration that Samsung has achieved with their Galaxy line-up. The Galaxy S series has been a sales hit, and with the initial impressions piece, it was said that the average consumer lives and dies by what’s familiar. Samsung continues to iterate with their Galaxy S line with consistent improvement and little, if no regression from generation to generation. This is where Samsung dominates, as the Galaxy S5 is clear evolution of the Galaxy S3 and S4, but made more mature.

The inspiration of the Galaxy Note 3 is also evident in the Galaxy S5’s design. Like the Note 3, the sides of the phone have the same ribbed chrome-colored plastic, which helps with gripping the phone. The front, like the Note 3, also has a subtle pattern beneath the glass. The same layout that has been used since the original Galaxy S is still mostly unchanged here. 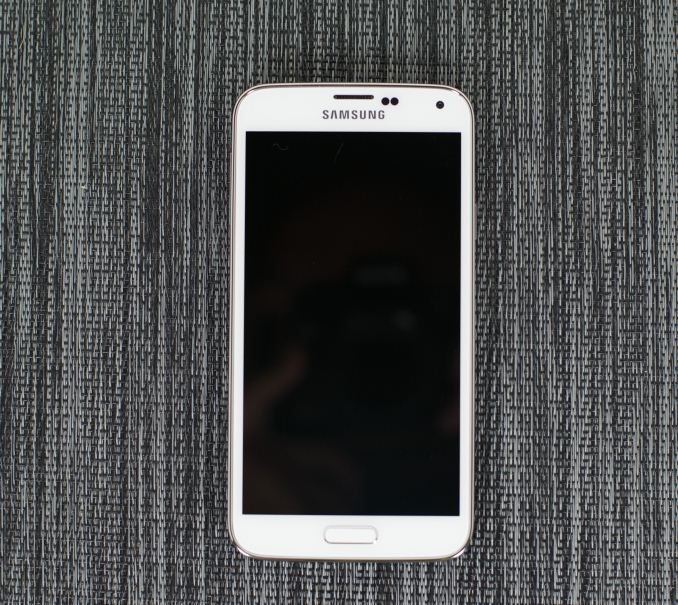 There’s a single rectangular home button, with two capacitive buttons on the side and an earpiece on top, with holes for the sensors. There’s also a noticeable lip as you swipe off the glass lens, which is noticeably thicker than the one on the Galaxy S4. This lip keeps the glass from touching the surface if the phone is set face down on a table. The only major departure on the front is the capacitive button configuration which replaces the menu action overflow button with a multitasking button, something that has been sorely lacking from Galaxy phones, although this change is likely to annoy those that preferred to have a dedicated menu button. On the bright side, long pressing the multitasking button acts as an action overflow button. 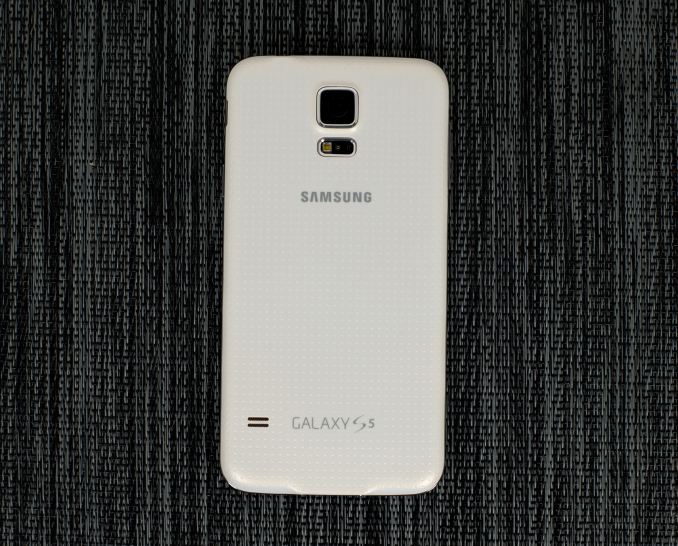 On the back, the phone has undergone some serious changes, although it’s still quite familiar. The speaker is still present, as is the camera bump with the flash module underneath. The heart rate sensor is also next to the flash, and the single speaker is on the back as well. What’s really interesting is that the texture is no longer glossy. The back has a grid pattern of indentations in it that help with gripping the phone, and there’s a noticeable texture that seems to resemble the same pattern that the Note 3 had, but there’s no stitching to suggest a faux-leather texture. Along the sides, the power button is on the right side, the volume rocker on the left. The IR transmitter continues to be in the same position that it was before, as is the 3.5mm headphone jack which is on the top right. The microUSB 3.0 port is on the bottom, covered by a flap that is supposed to protect against water immersion according to IP67 spec.

Overall, while the Galaxy S5 isn’t as nice in the hand as the HTC One (M8), it’s certainly not as bad as the Galaxy S4 or S3. I have to say that compared to the GS4, the back makes a huge difference in improving the feel of the device. It's not what I'd consider premium (despite the GS5's price point), but it's much better than before.

While the Galaxy S4 and HTC One were generally comfortable to use, the Galaxy S5 and HTC One (M8) are both teetering at the edge of too large. I found that both are effectively sitting right at the edge of what I’d consider to be usable with one hand. HTC continues to have a bit more ergonomic shape as the rounded back cover fits in the hand better, although it makes the phone have a higher maximum thickness. 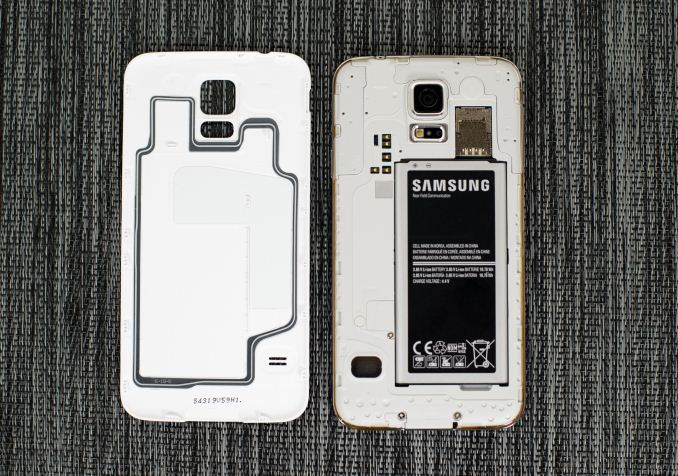 Taking off the back cover of the phone, it’s clear that the entire phone has been designed with water resistance in mind, as there’s a rubber gasket all along the back cover, and there’s an extra plastic snap in the center that helps to ensure that the gasket seals the phone properly. The GS5, like the GS4 Active, retains an IP67 (Ingress Protection) rating. The first digit (6) indicates that the design is fully sealed against dust, while the second digit indicates that the device is submergible up to 1 meter for up to 30 minutes. Another consequence of this need to waterproof the phone is that taking apart the phone for repair is no longer done by removing screws from the cover that is underneath the backplate unlike the Galaxy S4. Instead, based upon some teardowns done by others, repairing this phone must be done by removing the display first, then the midframe and the rest of the phone can be accessed for repair. In short, the assembly of this phone most closely resembles the Galaxy S4 Active, which is hardly surprising because both are IP67 certified. However, as Samsung emphasized at their launch event, this doesn’t make the Galaxy S5 waterproof in any way.

Outside of the physical construction of the device, the Galaxy S5 continues to ship the latest and greatest hardware for its time. Samsung has used the MSM8974ACv3 Snapdragon 801 for this phone, an updated AMOLED display with a claimed 500 nit brightness for outdoor visibility, and a new ISOCELL 16MP camera sensor. A comparison of the Galaxy S4 and S5 can be seen in the table below.

Outside of camera, display, and SoC, battery gets a noticeable bump and a new higher voltage chemistry (3.8V vs 3.85V) , the WiFi solution becomes a dual spatial stream solution, and there's a mild increase to size and mass.