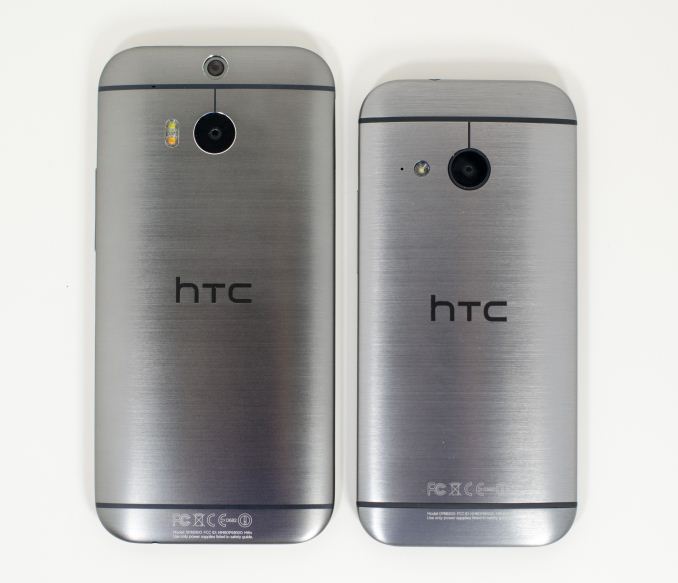 Today, HTC is launching the HTC One mini 2, a phone that is supposed to be a smaller version of the HTC One (M8), both in price and size. As a direct successor to the HTC One mini, a surprising amount has changed. The camera is no longer the Ultrapixel sensor, the display and overall size increase, NFC shows up, and the SoC has been changed to use a quad core Cortex A7 setup over the dual core Krait setup from last year. A list of the differences between the One mini, One mini 2, and One (M8) can be seen below.

As seen above, the One mini 2 is a noticeable step up from the One mini. The battery is larger, the modem supports LTE category 4 and carrier aggregation if two WTR1625Ls are on the device (though it doesn't appear that the One mini 2 has such a setup based upon the information that we've seen). The front facing camera appears to be the same as the one in the One (M8), and the design is largely similar as well. On the audio side, HTC has stated that the One mini 2 uses the same amplifiers on the speakers and 3.5mm jack as the One (M8). However, the second 2MP sensor is gone from this version, as is the dual temperature LED flash.

The most shocking change is likely to be the main rear camera sensor, which forgoes the 4MP UltraPixel sensor for a traditional 13MP camera with 1.12 micron pixels. HTC is quick to point out that not only is the 13MP camera cheaper than the two sensor DuoCam solution on the M8, but it's also cheaper than the single 4MP UltraPixel sensor. HTC remains committed to its UltraPixel strategy, but on the One mini 2 cost has a much higher priority than low light performance. 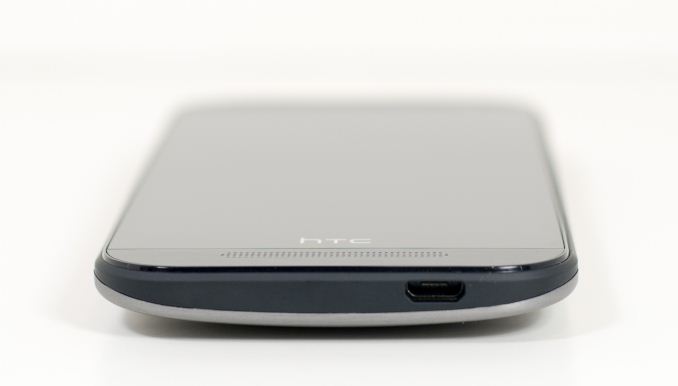 The One mini 2 also loses Zoe, Panorama 360, and dual capture, only leaving the standard still, video modes with scene selection capability. It seems pretty clear that the ISP on the MSM8926 just isn't powerful enough to support dual encode capabilities, and it's likely that Pan 360 required too much compute to be realistically usable on the One mini 2. This seems to also be reinforced by the dramatically longer shot to shot latency on the One mini 2, which can be slow enough to display a "Saving..." toast if the gallery icon is tapped immediately after taking a photo. While the preview of the One mini 2 is noticeably lower in quality and resolution than the One (M8), in good lighting conditions it's clear that it has better detail, although it will take more extensive tests to truly determine how the cameras stack up.

On the SoC front we have to deal with the confusion that stems from Qualcomm's overly simplified branding. Although both minis use a Snapdragon 400 SoC, the original mini featured an MSM8930 (2 x 1.4GHz Krait 200 cores) while the updated mini moves to a quad-core 1.2GHz Cortex A7 design (MSM8926). CPU performance should improve a bit with the move to Cortex A7. The GPU is still Adreno 305.

Outside of simple specs, the hardware is very different from the One (M8). The design, once a wrap-around body of aluminum, now ends around the volume rocker, leading to an M7-esque plastic sidewall that is grippy and makes for a neat design flair. The mini 2 eschews the M8's aluminum unibody for three pieces of aluminum laid into the plastic midframe. Ignoring the display, 90% of the M8's body was made of aluminum. By the same metric only 50% of the mini 2's body is aluminum. Even the One mini 2's conservative use of aluminum is substantial compared to other phones with similar specs. 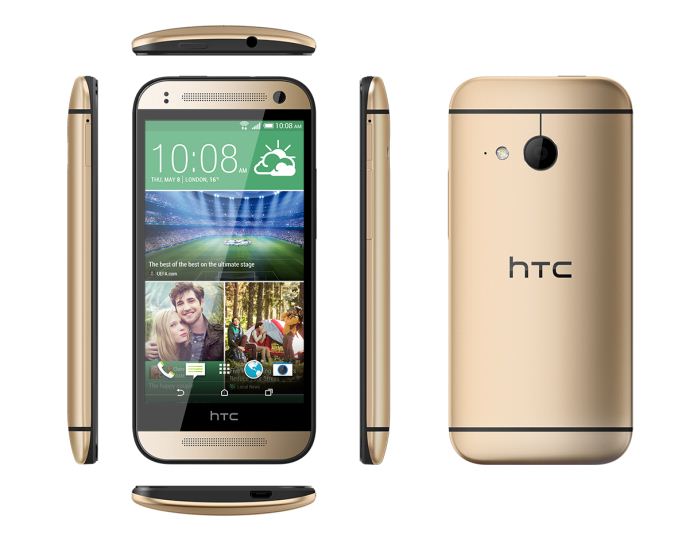 Note that although the volume rocker on our gunmetal gray sample is silver, that will only apply to the first batch of units to hit store shelves. Subsequent batches of gunmetal One mini 2s will have a gunmetal volume rocker that matches the rest of the device. Just like the M8, the One mini 2 will be available in silver and gold as well. 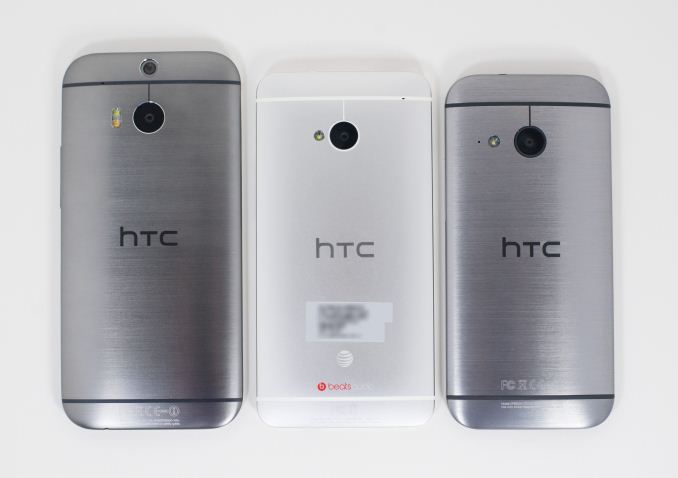 The dual stereo speakers are still present, and HTC has moved the proximity/light sensor to the left side of the phone, and pushed the front facing camera to the right to equalize the width of the two speaker grilles. The display grows in size compared to the original mini (4.5" vs 4.3"), although it's still a 720p LCD panel. The larger display drove a larger chassis, which also enabled the use of a slightly larger battery (7.98Wh vs 6.84Wh). With very low power hardware under the hood, the One mini 2 should be pretty decent when it comes to battery life.

This phone looks and feels very much like a merger of the One 2013/M7 and the M8, even in size. The top-mounted 3.5mm jack, power button on the top-left, and single LED flash to the left of the camera are all reminiscent of the M7. While the One mini 2 is still significantly smaller than the One (M7), it is much closer than one would expect, and their sizes are almost equivalent. If the One mini was "just right" for you, the One mini 2 is likely to be at the edge of comfort or slightly too large. For most people, I suspect that this will be of a much more comfortable size than the One (M8), although the display placement still feels too tall due to the on screen buttons, which shift the keyboard further up than one might expect. 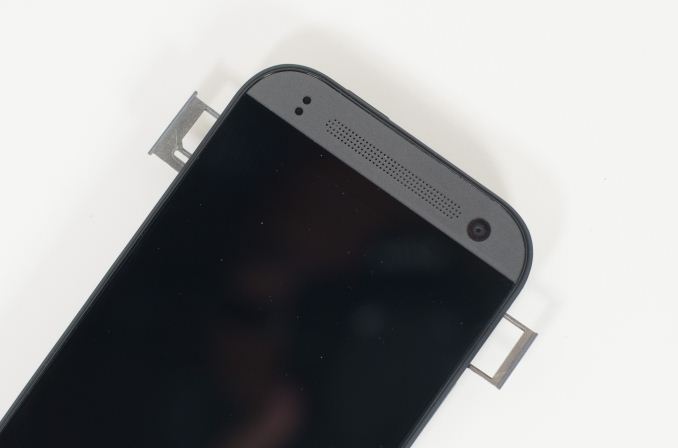 The One mini 2 is definitely an upgrade from the original. Just like with the One mini, expectations have to be adjusted to fit the lower price bracket that this phone will slot in. The One mini 2 isn't just a smaller version of the M8, but like its predecessor it is also a lower specced device.

Unlike its predecessor however, the One mini 2 launches in a world where the Moto G LTE will soon exist. With similar hardware underpinnings but priced at $219 compared to the One mini 2's $360+ expected price point, HTC is betting on its material choice and design to move units. It's a conscious bet that look and feel matter more than specs at this price point. There's definitely room for HTC to price the One mini 2 above the Moto G LTE, but it's difficult to judge just how much higher HTC can go.

The One mini 2 will be available in Europe and Asia beginning in June. There's no US launch planned at this point.