In terms of size, the Nightjar NJ520 appears just like any other modular ATX PSU. Its silver chassis is 160mm deep, making it suitable for all ATX compliant cases. It is however noticeable that the PSU lacks a fan. The sides of the Nightjar NJ520 are perforated and, as the warning label indicates, the top side of the chassis has to be facing upwards when it is installed in a case, as the cooling scheme relies on convection via passive airflow. This will not be a problem for most modern tower cases, as they have a PSU compartment at or near their bottom; however, it will most certainly be an issue with tower cases that have the PSU compartment above the motherboard tray, or with most desktop/HTPC cases. 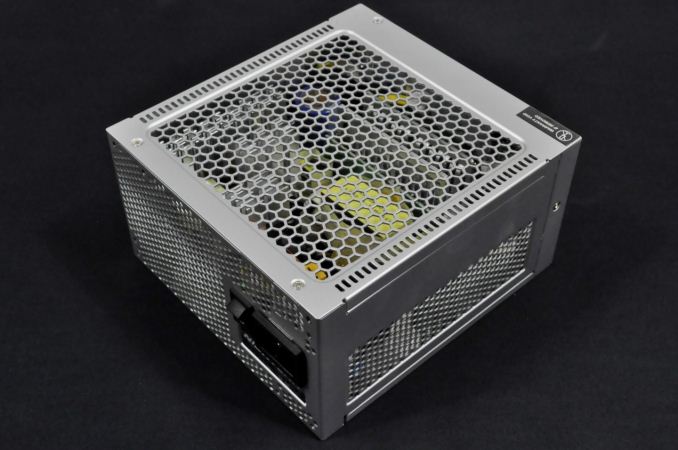 The front side of the chassis has even more openings for passive airflow, as well as the modular cable connectors. The connectors are black and there is a legend printed on the chassis, although they are keyed and you cannot install a cable into the wrong connector. The rear side is similar to that of any other ATX PSU, with an AC cable plug, a small switch and a metallic sticker with the series name beneath it.

After looking inside the Nightjar NJ520, we quickly identified that it is a Seasonic design, the one Seasonic is using for their own Platinum 520W Fanless model. There is a very strong filtering stage, partially shielded, consisting of six Y capacitors, three X capacitors and three filtering inductors. There is also a relay, which cuts off the AC supply to the unit entirely once it is turned off, to minimize losses while the system is powered off. 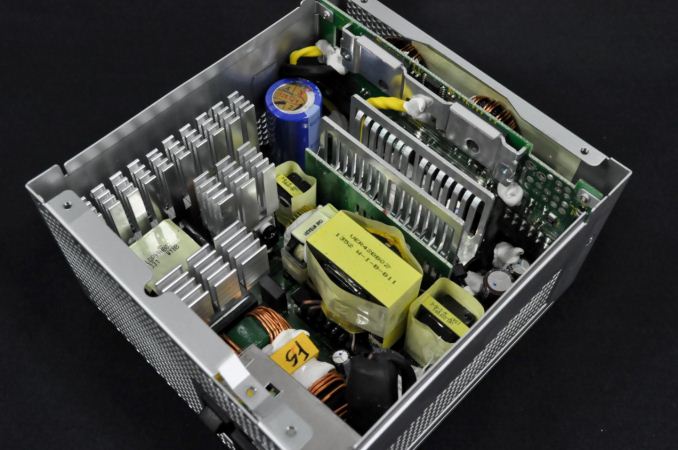 Despite the low output of the unit, there are two parallel rectifying bridges mounted on their own heatsink. The active APFC components, two transistors and a diode, are on the large heatsink near the edge of the PCB. The primary inversion stage consists of four switching transistors, forming a full bridge topology. The 12V conversion stage components are cooled by the U-type heatsink seen on the secondary side of the transformer. Only a 12V line is generated; the minor 3.3V and 5V lines are converted from it via DC-to-DC circuits that are on the connector's board.

A Hitachi 330μF / 420V capacitor is present for the APFC circuit. All of the secondary capacitors, electrolytic and polymer alike, are supplied by Nippon Chemi-Con. The quality of the soldering is very good, although not the best that we have seen and with a few hand-made joints. Glue is used to strengthen the unit mechanically, improving its reliability and reducing the chance of high frequency vibrations (coil whine noise).