We received the Rosewill RGB80 inside a very simple, black cardboard box, and the main artwork is a picture of the keyboard itself, highlighting its capability to change the backlighting to (theoretically) any color of the visible spectrum. Do not be misled by the picture however, as the keyboard does not feature individual key backlighting; only a single color can be set for all of the keys. Unlike with the Apollo RK-9100, there is just one version of the RGB80 at the time of this review, with Blue switches. 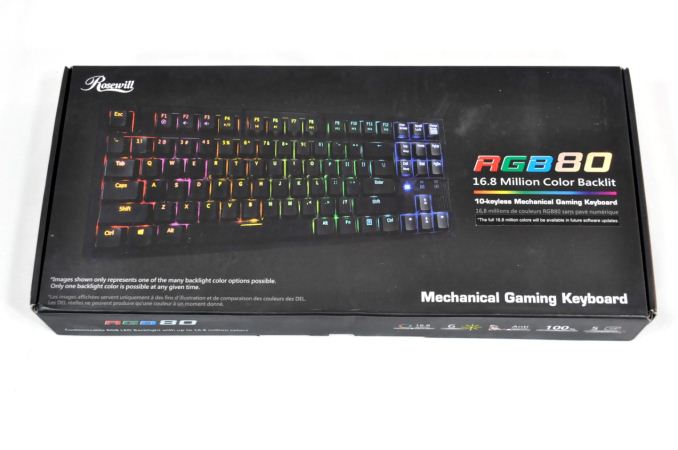 Similar to the Apollo RK-9100, the RGB80 is a relatively simple looking keyboard in ten-keyless format. It has a detachable USB cable that can be routed to exit from the center or near either of the sides of the keyboard. Rosewill also provides six clear "gaming" keycaps and a keycap extraction tool.

The RGB80 sports a very sturdy, thick and tall plastic chassis that gives a feeling of robustness. Once again, Rosewill is using corona treated plastic for the chassis, the textured surface of which feels soft to the touch and does not get dirty easily. Ten-keyless keyboards are designed with compactness in mind, so naturally there's no wrist rest supplied. The series logo is etched on the sides of the chassis but, despite the very tall body, there are no USB ports or jacks. It has a very low current requirement of just 500mA though, making it compatible with virtually all systems, even with low-power tablet/notebook USB ports. 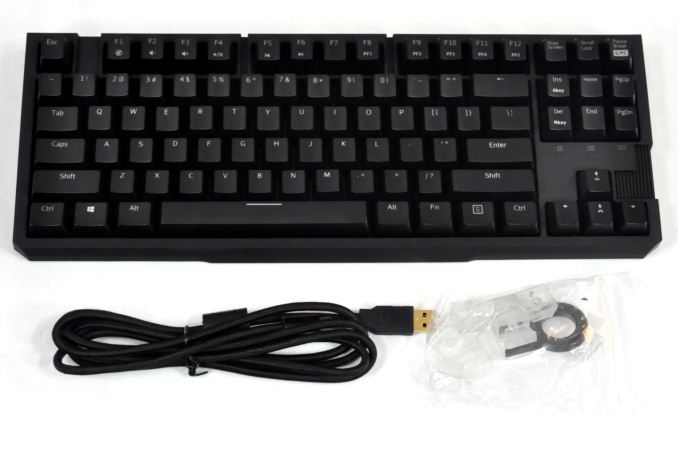 Beneath the Rosewill RGB80, we can see the cable routing channels, four large anti-slip pads, and two tilt feet. The anti-slip pads are more than enough to keep the heavy RGB80 stable on nearly any surface. We can also see that the cable jack is a typical Micro USB port, meaning that the user can replace the cable with any Micro USB to USB cable if desired.

As we suspected when looking at the specifications of the RGB80, Rosewill is not using Cherry MX switches but Kailh switches instead. As we mentioned in previous articles, Kailh switches are basically "perfect" copies of the Cherry MX switches, which the company started producing after Cherry's patent expired. There is a lot of chatting around in forums and billboards regarding the quality of Kailh's products, with complaints about their consistency and quality. Unfortunately, to test the quality of the switches we would have to perform millions of keystrokes, which is not possible within the time frame of a review. However, as we have access to a texture analyser, so we can at least test the consistency of the keys.

The blue switches have a rating of 50cN ± 14cN, so the Rosewill RGB80 gets a borderline pass, with the weakest actuation force being 37cN and the strongest being 60cN. This difference typically wouldn't be apparent to a user while typing, but it is discernable if you identify the weakest and strongest keys and test them using the same finger. This is perhaps the biggest drawback of Kailh: the quality control is not at the same level as Cherry MX. How much that truly matters is going to be more of a personal preference, with the primary advantage being Kailh switches cost less than Cherry MX switches.

The FN key works similarly to the Apollo RK-9100. By holding it down and pressing the F1 to F6 keys, the user can perform sound and media control functions, while F8 to F12 keys will switch between the five different programmed profiles. The "game mode" has been changed from FN+F12 to FN+Pause/Break. Finally, the FN plus the up/down arrow keys controls the backlighting settings. 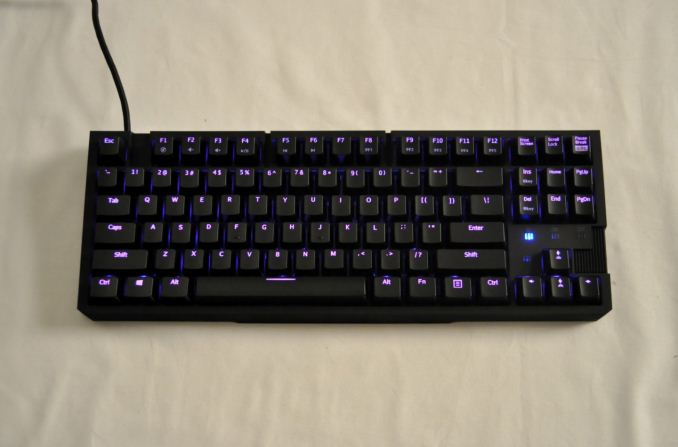 As we mentioned above, Rosewill also provides ten (QWEASD + arrow keys) clear keycaps. The keycaps have the character printed on the front side rather than the top. Their transparency however makes them very bright in comparison to the rest of the keys. Although this probably was the desired effect, it can also be annoying if the backlighting is not turned down. 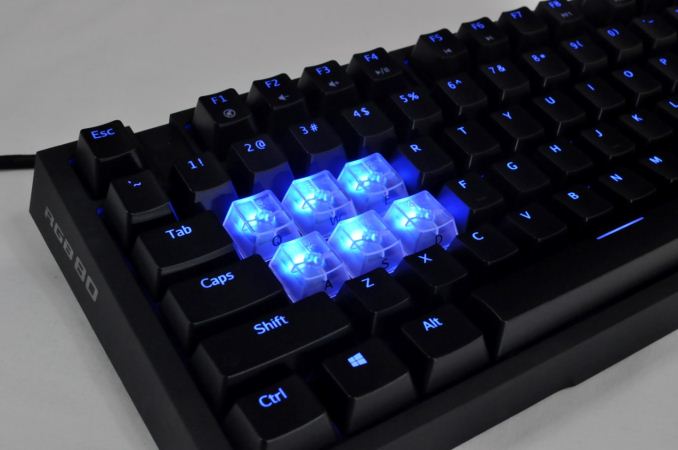 Inside the body of the Rosewill RGB80, we found a well-assembled but dirty PCB, with an astonishing amount of powder on it, most likely from the soldering process or from the powdered gloves of the factory workers. A Freescale MC9S08JM32 microcontroller is the core of the RGB80, with an MXIC 25L512E flash chip next to it.

Once again, the weak link of the Rosewill RGB80 is the software. It is somewhat better and more detailed than the software of the Apollo RK-9100, but it still does not do this keyboard justice. The RGB80 is fully programmable and, once again, the user can program any key to perform any action at all. Aside from simple layout changes, the keys can be programmed to execute macros and launch applications. The macro recording of the software can register up to 27 keystrokes. Longer macros and or complex macros that require recording the position of the cursor are possible, but a third-party software that can compile .EXE files is necessary, and you then set the compiled files to be launched as applications.