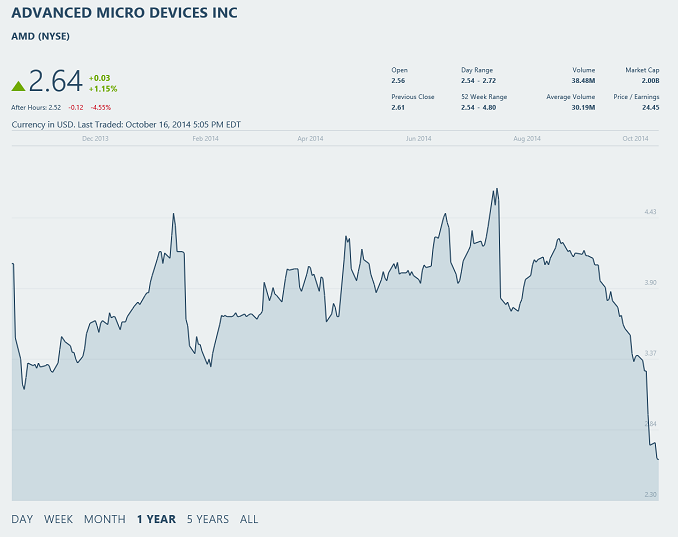 This afternoon, AMD released their financial results for the third quarter, which ended September 27, 2014. While revenue was down slightly from Q2, the net income was positive for this first time this fiscal year. non-GAAP Earnings Per Share was $0.03, which missed analysts’ projections of $0.04. Earlier in the quarter projections were as high as $0.07 per share, but the Computing and Graphics segment was mixed this quarter due to “challenging market conditions” according to AMD.

Starting July 1st, 2014, AMD reorganized their reporting structure into two groups. The Computing and Graphics group focuses on desktop and notebook processors, chipsets, discrete desktop GPUs, and workstation GPUs. The Enterprise, Embedded, and Semi-Custom group includes server processors, embedded processors, dense servers, semi-custom SoCs, engineering services, and royalties, which is pretty much every market AMD is in other than the traditional desktop/notebook market.

The Computing and Graphics segment revenue decreased 6% from last quarter and 16% year-over-year. AMD states the primary decrease is due to by lower chipset and GPU sales as compared to last quarter, and decreased notebook processor and chipset sales as compared to a year ago. The Operating Loss for the division was $17 million, which is up (or down, depending on how you look at negative numbers) substantially from the $6 million loss last quarter and $9 million loss in Q3 of last year.  The Average Selling Price (ASP) of CPUs/APUs actually increase sequentially and year-over-year. Discrete GPU ASP decreased over last quarter, but increased over the same period last year. The Computing and Graphics segment is a tough market for AMD right now. Intel is moving to 14 nm while AMD has to rely on Global Foundries and other fabs to attempt to catch up. This hampers their ability to match Intel on the performance per watt metric certainly. On the GPU front, NVIDIA just released the Maxwell based GTX 980 and 970, as well as the mobile counterparts which have shown impressive performance, and efficiency. Hopefully AMD can counter with some new products in the near term.

The Enterprise, Embedded, and Semi-Custom division fared much better for Q3, with a 6% sequential gain in revenue and 21% year-over-year. Operating income for the quarter was $108 million which was up from the $97 million of Q2, and $92 million of Q3 2013. As with the last couple of quarters, AMD attributes the gains primarily due to increased sales of semi-custom SoCs. Their embedded revenue grew by “double digits” as compared to last quarter. Clearly AMD has found a niche here where they can use their expertise in new markets to shore up the company, and so far, it has been successful. In addition, AMD has closed two new Semi-Custom SoC designs this quarter which should help this division continue its growth.

In addition, AMD is also trying to cut costs by reducing their workforce by about 7% Currently, they have 10,149 employees as of the end of Q3, which means around 710 people will be cut from the company. Most of these cuts should be done by the end of Q4. AMD will then adjust their real estate footprint to accommodate the smaller workforce, which could mean additional infusions of cash from the sale of buildings. They are hoping to have savings of $9 million for Q4 and $85 million for FY 2015.

Their forecast for Q4 is not rosy either. AMD is expecting revenue to decrease 13% from Q3, plus or minus 3%. However they are also hoping to drop expenses from the current guidance of $420 to $450 million, to $385 million, which means they are hoping for a positive non-GAAP free cash flow.

Although AMD did miss investor earnings, they did not miss by much and the net result was a quarter where the company managed to turn a tiny profit, which is in stark contrast to the first couple of quarters for 2014. Unfortunately, AMD’s losses all stem from the desktop PC industry. Intel just had a record quarter, so there is certainly money to be made in this sector. We will have to see how Dr. Su, the new CEO of AMD, addresses this for the next quarter.