Toshiba Chromebook 2: A Feast for the Eyes

Laptops for the most part pretty much live and die by their subjective evaluation. No matter how good the specs might look on paper, if the actual user experience ends up falling short then at best we have a laptop that can only be recommended with some qualifications. For the Toshiba Chromebook 2, the biggest qualification in my book is going to be Chrome OS; if you’re okay with the limitations (and benefits) of Chrome OS, there’s nothing else on the Toshiba Chromebook 2 that’s going to be a problem. Let’s quickly cover the major items in a bit more detail.

Starting with the display, again, it’s awesome. When we get to the raw numbers we’ll find that it’s not perfectly calibrated, but it’s far closer than any other Chromebook we’ve looked at. It also has a great contrast ratio (above 1000:1) and the colors make images and videos a completely different experience compared to something like the Acer Chromebook 13. Just look at these pictures for an example of what I’m talking about:

Using a camera to take a picture of a display is never a great way of doing things, and I did have to Photoshop the images a bit, but even so the results are telling. You can see immediately that the colors are different, even from the front-on view, but what really causes havoc on the Acer LCD is the poor vertical viewing angles. From above the TN display looks washed out, while from below it experiences a horrible color shift even to the point of inversion. The Toshiba with its IPS display doesn’t have either problem. In other words, the display is a winner and if you’ve been looking for a Chromebook with a good display that won’t cost too much (e.g. not the Pixel), this will do quite nicely.

The speakers in the Toshiba Chromebook 2 are decent and can get loud enough that watching YouTube videos in a group setting isn’t a problem. Toshiba partnered with Skullcandy on the speakers, and for a Chromebook this is probably as good as you’ll get. Interestingly, the speakers are fully enclosed in the case with no visible grille (the Acer Chromebook 13 takes a similar approach), but it doesn't seem to affect sound quality negatively, or at least it's no worse than other laptop speakers. The headphone output was also clean and got plenty load. 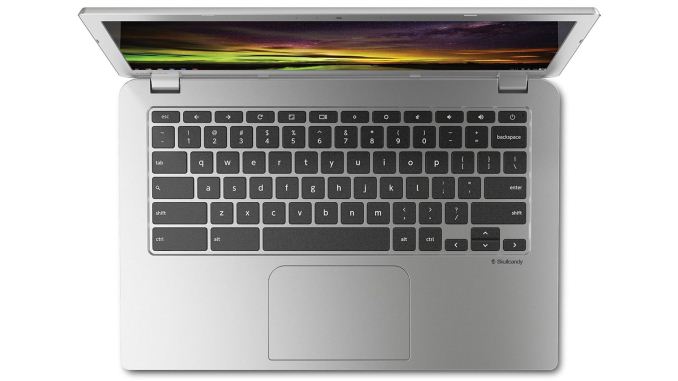 The keyboard and touchpad for their part work well, though there’s nothing exceptional about them. Key travel is a bit shallow in my opinion, but it’s better than the C720 in overall feel. The touchpad tends to work fine most of the time, but as with the Acer Chromebook 13 there are times where lack of performance can make the touchpad feel sluggish.

Interestingly, some of the worst offenders for sites that feel slow happen to come from Google, with Drive (and Docs, Spreadsheet, etc.) in particular being quite the sluggish experience. Open up AnandTech.com and everything loads and scrolls beautifully, but Drive makes me immediately yearn for a faster system. That’s sort of the irony of the whole Chromebook experience for me: Google’s own cloud-based tools can be some of the most demanding in terms of performance, and yet they’re the tools you’re almost forced to use on Chromebooks, which are frequently underpowered compared to other computing options. Then again, Office 365 running on my Core i7-4770K desktop feels sluggish compared to Office 2010 running on the same system, thanks to the gussied up animations; sometimes, less is more. 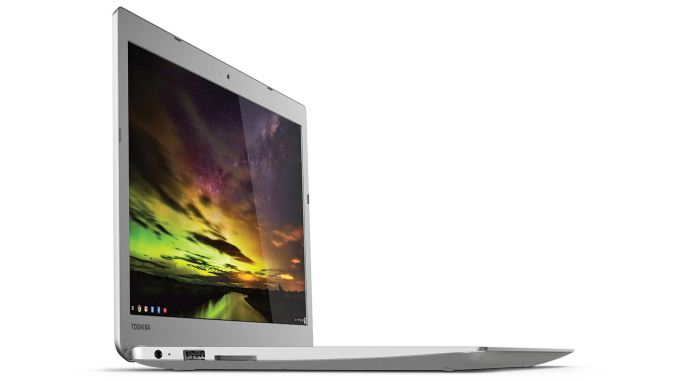 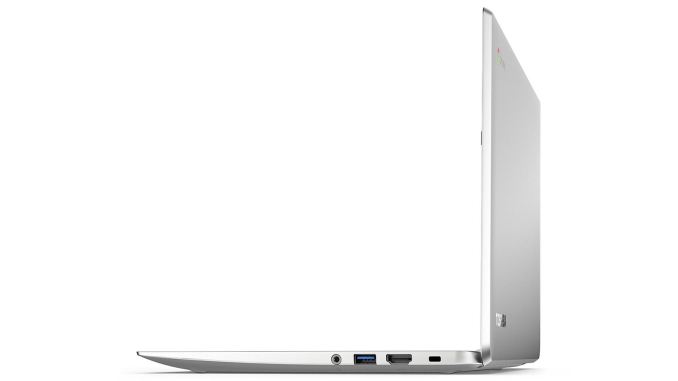 Moving on, build quality is decent but pretty much what you’d expect from a $300 laptop. The chassis is primarily made of plastic and if you press hard enough there’s a bit of flex, but nothing to be concerned with for most use cases. (I'm not sure I'd want a bunch of middle school students cramming this sort of laptop into a backpack, though.) It is also interesting to notice the difference in size between the Toshiba Chromebook 2 and the Acer Chromebook 13; both sport 13.3” 1080p displays, but the Acer chassis is about half an inch deeper and wider. I still prefer the feel of the Acer Chromebook 13 keyboard, but it’s really more like a 14” chassis with a 13.3” display, and there’s no real reason for the added size.

We’ve mentioned the performance aspect and wondered if there might be cases where the slow graphics could become a concern. On that subject, while normal 1080p YouTube videos played fine, 1080p60 videos are pretty much out of the question. You’d think simply dropping half the frames could address the problem, but on the 1080p60 videos I tried, stutter was so bad that in some cases frame rate was in the low single digits. 720p60 didn’t have a problem, at least, but that’s less than half the resolution of 1080p60. The Tegra K1 in the Acer CB13 by comparison was able to decode 1080p60 YouTube videos, as was the Haswell-based Celeron 2955U in the Acer C720 (albeit at the integrated screen’s 1366x768 resolution). Perhaps it’s possible to get 1080p60 working better with some additional software/driver updates, but at present you’ll be limited to 1080p30 or 720p60, at least for YouTube videos.

Finally, let’s quickly touch on battery life. Chromebooks in general do well here, and the Toshiba Chromebook 2 is no exception. If you’re looking for a laptop that can last eight hours off the battery, it will suffice. However, the “up to nine hours” is very much the best-case, and it’s probably at 100 nits screen brightness. We’ve tested a few other Chromebooks that do better, and the Acer Chromebook 13 in particular offers a lot more battery life in an otherwise similar package. It could be that the higher quality 1080p IPS display simply uses more power than the 1080p TN panel in the Acer CB13, but more likely is that the Tegra K1 is simply a more efficient SoC.

Overall, from a subjective viewpoint the Toshiba does very well, especially for an inexpensive laptop. There are no show stoppers, and the only potential gripes are going to be the slightly lower than typical battery life as well as the inability to handle certain graphically complex tasks like 1080p60 YouTube content. There are situations where Tegra K1 is clearly the better SoC, though outside of a few edge cases it mostly feels like splitting hairs. For people willing to live within the Chrome OS ecosystem, this is my favorite Chromebook so far, though the upcoming Acer Chromebook 15 still holds a lot of potential.

There’s also still that question of price – the Acer Chromebook 13 gives you basically everything except for a good screen; is the extra $80 for 4GB RAM and a high quality screen worth the cost? On most laptops I’d pay $100 for a good screen in a heartbeat, but here the difference is a 25% increase in price, and for some that will be too much to take. However, when you consider the fact that the screen is the part you interact with the most on a laptop, it’s a justifiable expense, especially for anyone that intends to use the device on a daily basis. There are far worse ways to spend an extra $80 when it comes to upgrading components in a laptop.

Finally, for those interested, along with a complete gallery of our test laptop, we've opened up the chassis to see what's inside the CB35. It's not particularly hard to open the chassis, as you simply need to remove the ten screws on the bottom, but note that two screws are hiding under the pads at the front of the chassis. Once inside, well, there's really not much to do. The RAM and storage aren't user upgradeable, so short of replacing the battery at some point there's no reason to open things up.