There is no mistaking the ThinkPad X1 Carbon for what it is. It is a ThinkPad. If you have never been a fan of the look of a ThinkPad, you likely will not like this one either, but for those that prefer the understated look, they will be happy to see the traditional look and feel. There is no flashy lights or bright colors available. Just matte black. The only “bling” at all is the red LED used as the dot on the “I” of ThinkPad, and it glows red when the device is on and flashes softly when it is sleeping. The rest of the device is very understated. Clearly that design philosophy has done well for the ThinkPad line, since they have built over one hundred million of them now. 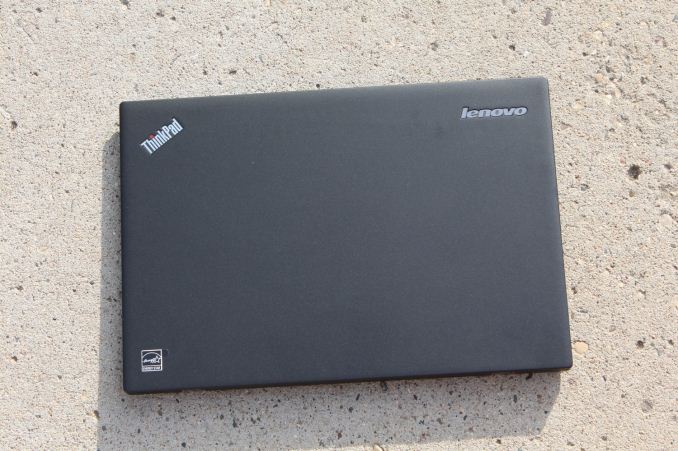 The matte texture is great to hold on to, and you never feel like you are going to have it slip out of your hand. It actually has a tiny bit of metal flecks in the finish though so up close it looks really good. This same finish is everywhere on the device, and it seems fairly resistant to fingerprints, however when you do get fingerprints on it, they do not come off as easy as something with a gloss coating would.

The body of the X1 Carbon is not quite the thinnest out there, but it is close. At just 17.7 mm thick, it is the thinnest ThinkPad made. The build quality is top notch, with no creaks or gaps. That is not exactly true though, since there is one gap. The rear of the device has a gap between the display and chassis. The beveled edge on the display allows the display to open up all the way to 180° without binding on the chassis, or without the display lifting the rear of the laptop up. On the underside, there is also a beveled edge on all of the sides which are for airflow and act as a spot for the speakers. 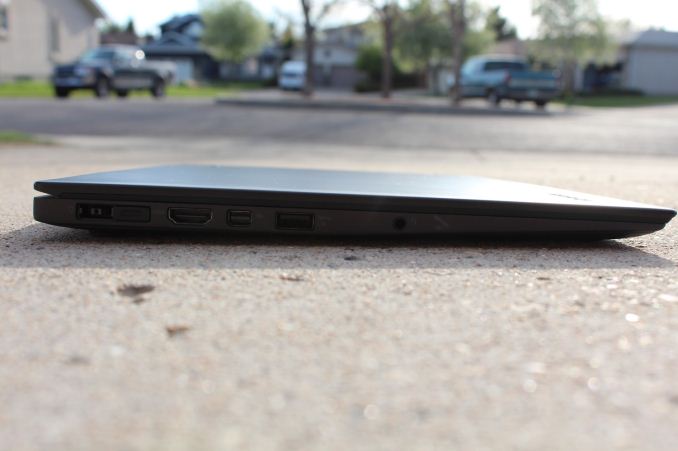 On the left side we find the majority of the ports, with the power and docking station port at the display end, the HDMI and mini DisplayPort next, a USB 3.0 port, and the headset jack closest to the front. On the right side the ports are a lot more sparse, with just a USB 3.0 port and an Ethernet extender port. Like most Ultrabooks, the X1 Carbon is not thick enough for a full Ethernet port, so Lenovo has a handy adapter cable to do this duty. I appreciate the integrated Ethernet adapter capability, but this could have likely been easily supplanted with a third USB port. For those that need a more dedicated Ethernet solution for the office, the optional docking connectors would likely be a better option. On the back of the X1 Carbon is the slot for the optional SIM card, for those that opt for the LTE version. If you will notice, I did not mention a SD card slot on this laptop, which is something that I use quite a bit to transfer images from a camera, so the lack of it was missed on this notebook.

Opening up the device we get a look at the display, and in the unit shipped it is the 2560x1440 model with touch. I will get into the display characteristics later on, but the bezels are nicely proportioned, and the glass cover continues on almost right to the edge. Looking at the deck of the X1 Carbon we see a couple of things that are not on every device. First is the integrated fingerprint reader, which makes the process of logging in so simple that you wish all devices had one. It can also be used to authenticate at boot time, and with the advent of Windows Hello, this laptop should be well suited for Windows 10. The other noticeable change is the TrackPoint which is front and center (literally) and in bright red it can’t be missed.

So let’s talk about the TrackPoint, and the keyboard overall. Last year, Lenovo made some big changes to the keyboard and TrackPoint. They replaced the Function keys with a row of Adaptive keys, which could be changed depending on what was being used, and the TrackPoint buttons were integrated into the trackpad. Luckily for Lenovo, the lead time for notebook design is not as long as something like a car, or even a CPU. They made some pretty major changes to the keyboard and TrackPoint last year, and although I did not use one, feedback I have heard was not positive. Lenovo clearly heard that as well, so for 2015 the TrackPoint dedicated buttons are back, as is the function keys at the top. The other oddities with the 2014 keyboard have also been reversed, so the Home and End key are now in the function row rather than replacing the Caps Lock key. The Fn key is back in order to operate the various options on the function row too. The keyboard layout is very traditional again, and although I appreciate new ideas, the move back to the normal keyboard is even more appreciated. 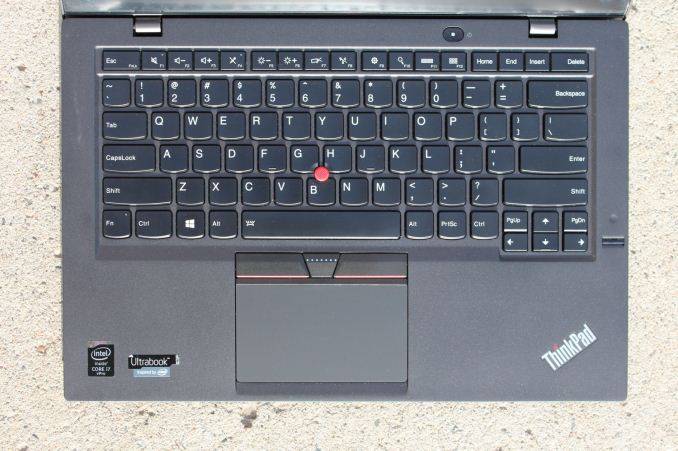 And what a keyboard it is. ThinkPads have long been known to have great keyboards, and the X1 Carbon is no exception. All of the keys are slightly dished on top, and the amount of resistance when typing is good. Considering how thin these Ultrabooks are, it is always impressive when they can get the keyboard right. Lenovo has also sent me the ThinkPad T450s, and that is a thicker more traditional business notebook, and I would say that the keyboard on the T450s is better than the X1 Carbon, but the Carbon is still very good. I took the X1 Carbon to Microsoft’s Build conference, and it was easily up to the challenge of live blogs and pipeline posts.

The other thing I love on the ThinkPads is the TrackPoint. I have already mentioned how the physical buttons are back this year, and it works so well. For those that have not had a chance to use a TrackPoint (other companies also offer these pointing sticks too) it is a great mouse interface for a notebook. Some people prefer trackpads, but I prefer the accuracy and convenience of having the pointing device right where my hands are when typing. It also requires a lot less movement to get around the screen. Scrolling is very easy since you can just hold the center button and scroll at any speed you want.

For those that prefer a trackpad, the X1 Carbon has a good one of those as well. Some of the space is taken up by the TrackPoint buttons, but it is still a reasonable size. The top of it is glass, so sliding your fingers around is no issue. It is driven by Synaptics drivers, so you have full settings on one to four finger gestures. The main one I use is the two finger scrolling and it was nice and responsive. I still prefer the TrackPoint, but for those that prefer a trackpad, they should not be disappointed.

The X1 Carbon is thin, light, and very portable. It is very much a ThinkPad, but that is not a bad thing if you like the muted design. The build quality is great, and the choice of materials should make it very durable.